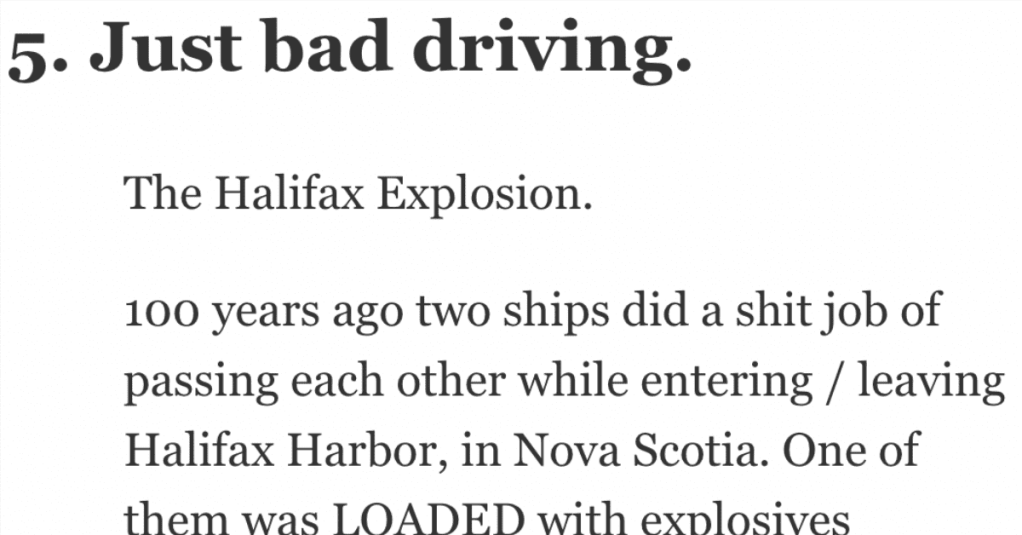 I’m sure that you’ve heard the saying “truth is stranger than fiction” and I can attest as a writer that this is definitely true – there are real, true stories from the past that would never fly as the plot for a novel because no one would believe it.

Still, they can be pretty fun to learn about when you know they really happened – and these 16 bizarre (but true!) historical events definitely fit the bill.

16. This always blows my mind.

In 1920, President Paul Deschanel of France fell through the window of the train while travelling on the Orient Express.

He stumbled up to the nearest signal box in his pyjamas and told the signalman that he needed help and that he was the President of France.

14. Say what you want about Napoleon…

The time when Emperor Napoleon Bonaparte escaped from the island where he was imprisoned on after his army was defeated, he snuck back into France under the nose of King Louis XVIII and literally every royal guard and roadblock from Marseille to Paris.

When he was actually caught just outside Paris, he managed to persuade the soldiers (who just so happened to be former Bonapartists) to escort him into Paris where he managed to successfully cause the king to flee, on top of raising a FULL ARMY to wage war against Europe AGAIN.

The only time in history an emperor took back an entire country just by waving his hat.

13. There’s nothing natural about that.

The Cadaver Synod – In AD 897, Pope Stephen VI had his dead rival Pope Formosus exhumed and put on trial. Stephen had a deacon speak on the dead pope’s behalf. Naturally, Formosus was found guilty.

Stephen ordered that two fingers Formosus used for blessing people cut off and his corpse thrown in the Tiber river.

Then he got fished out again, began performing miracles (supposedly), got his accuser deposed and assassinated, got reinterred at St Peter’s and eventually reinstated as a former Pope.

Napoleon’s exile on Elba was pretty bizarre, too.

In the first few months on Elba he created a small navy and army, developed the iron mines, oversaw the construction of new roads, issued decrees on modern agricultural methods, and overhauled the island’s legal and educational system.

Cut to a few months later.

“OK I’ve done all that and I’m bored again. I think I’ll head back to France…”

Basically, during WWII, the British find some dead body of some poor guy, dress it up like a British officer, attach some fake intel onto him, then throw him into the ocean, hoping he floats to enemy territory to mislead them.

10. His whole life really belongs on this thread.

The astronomer Tycho Brahe had a pet moose that he used to get drunk with. One time he brought it to a dinner party at a friend’s house. But sadly the moose did not survive the night. Once again the poor moose got drunk on beer and died from a nasty fall down a set of stairs.

Tyco Brahe also lost his nose in a duel, so he wore a prosthetic nose made out of metal. Some sources say brass, others say it was a gold/silver alloy.

He was also employing a small court jester named Jepp that he believed to be clairvoyant.

Mel Blanc (the voice actor who voiced every male character on Looney Tunes, as well as characters like Barney Rubble on The Flintstones and Mr. Spacely on The Jetsons) was in a head-on collision driving his sports car in a dangerous intersection known as “Dead Man’s Curve” in Los Angeles in 1961 (the same “Dead Man’s Curve” from the Jan and Dean song).

His legs and pelvis were fractured, and he was left in a coma. For weeks, doctors tried everything to get Blanc to wake up.

Eventually, when things were looking bleak, one of his neurologists decided to address one of Blanc’s characters instead of Blanc himself, asking him “How are you feeling today, Bugs Bunny?” After a slight pause, the previously-comatose Blanc answered, “Eh… just fine, Doc. How are you?”

Mel Blanc made a full recovery.

When he got out of the hospital, he sued the city of Los Angeles for $500,000, finally leading to the city reconstructing Dead Man’s Curve.

Russian Baltic fleet sails the long way (16k miles and 7 months) started by them opening fire on British fishing boats mistaken for Japanese vessels in the North sea…. sank their own ships while conducting target practice, then were destroyed by the Japanese fleet upon arrival (they mistook the Japanese ships for Russian and signaled them instead of firing).

The Great Molasses Flood, Jan.15, 1919. Massive wave of molasses from a broken tank flooded the area. It killed 51 people and injured 150. 2.3 million US gallons.

100 years ago two ships did a shit job of passing each other while entering / leaving Halifax Harbor, in Nova Scotia. One of them was LOADED with explosives destined for WW1.

They collided and one of them burned for a while, then exploded. The blast was a ~2/3 again larger than the one we saw in Beirut last year.

Thousands died or were blinded by shattering windows. There was a local tsunami (which followed a brief moment where the seabed was exposed to air), and then a monster snowstorm covered the relief effort in snow.

Largest human-made explosion even until the nuclear bomb, and I think it remains the largest maritime accident ever.

So they winged it.

Surprisingly, they did build a trebuchet, which fired exactly one shot, directly upwards, which promptly came down and smashed the trebuchet. This event is chronicled in both the journals of the conquistadors present as well as the Aztec records.

3. He really got around.

Alexander the Great named (or renamed) 70 cities after himself.

Some still have the name or derivatives of it – Alexandria in Egypt being the most obvious, but also Iskandariya in Iraq and Kandahar in Afghanistan.

In 1802, Napoleon added a Polish legion of around 5,200 to the forces sent to Saint-Domingue to fight off the slave rebellion.

Upon arrival and the first combat actions, discovering that the slaves fought off their French masters for their freedom, vast majority of Poles eventually joined the slaves against the French.. >Haiti’s first president Jean-Jacques Dessalines called Polish people “the White Negroes of Europe”, which was then regarded a great honour, as it meant brotherhood between Poles and Haitians.

Hannibal marching elephants over the Alps to attack Italy.

And the fact that he left Spain to do this just before Roman forces arrived to take him on, and then Rome was just like “meh” and continued south when they figured out where he was going.

They didn’t care because they thought there was no way he could do anything. Polybius’s account of Hannibal is fantastic, especially if you read what he says about the First Punic War and the Carthaginian Civil War as a context.

The petty hatred between Rome and Carthage was insane, and had been going on for an insanely long time. Makes the 100 Years War look like nothing.

I love history, y’all, and I can’t believe some of these are new to me.

What’s your favorite historical event that fits in this category? Tell us the story in the comments!