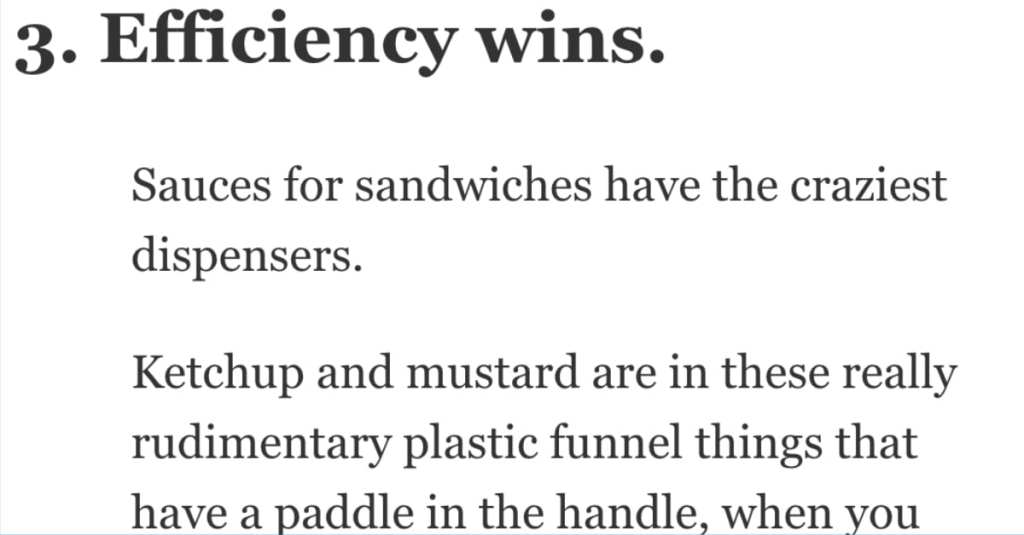 Every job has secrets, it’s just that not all of them are required to be kept once you’re no longer employed.

If you work for the CIA, you’ve probably got to take those to your grave, but otherwise…go ahead and spill.

And if you’re someone who goes through that McDonald’s drive thru on a regular basis – no judgement, I promise – you might be interested in hearing what employees learn once they’re given the keys to the castle.

Worked there in high school.

Found out that if you put the middle of a Mac bun in the fryer and then add soft serve and strawberry topping, it tastes just like a funnel cake.

Custom creations were the best part of working there.

The McDonald’s in my hometown had a basement.

I didn’t work there but on days where they had a shipment in, I’d watch them slide boxes down a slide that covered half the stairs while waiting in the drive through…

14. They get creative after hours.

Ice cream on top of a hot out the oven pie or cookie or cinnamon melt or brownie melt.

Or hot cakes. That shit was my jam.

I used to make quesadillas after close. The southwest mix and dressing was good for that.

We had taco Tuesdays sometimes, with in house toppings. Quarter meat, tomato, lettuce, cheese, tortillas, onions. I think the only thing brought in was the taco seasoning.

I’d scramble or sunnyside up the eggs for my break with the salt and pepper clicker meant for lunch meats and some cheese on top.

Not a “hack” but I miss the OG chicken select strips.

My first day on the job I was told to be on the lookout for the elderly gentleman who would try to sneak around the counter and pour the entire coffee pot into his mug while everyone was too busy to stop him.

He showed up and I stared him down.

He didn’t get his coffee that day.

12. You never know what you’re gonna get.

I worked there when I was in high school. Not a secret, but I hadn’t known much about franchises before then.

I hadn’t realized that McDonald’s could vary quite a bit in quality and professionalism based on who the owners were and what type of management/workplace they set up. I worked at a really good one (with good management, I mean), but some are s*%t.

have 2 McDonald’s near me, both relatively same distance.

The one I usually go to is more crowded but I feel that the food is better prepared and the drinks taste right.

I’ve been to the other McDonald’s before, not as crowded, but the nuggets tend to have a stale texture and the coke has this weird bubble gum type aftertaste lol.

11. The parking lot is always hoppin.

Depending on which one you work at, the parking lot is basically a meet-up for druggies/drug dealers and (at least where I was in New Mexico) people to meet up and have sex in their cars. As long as they kept their business to the middle of the night and didn’t cause any serious problems, we were told not to call the cops or make a fuss, mostly because they’d come in and buy food after their shenanigans.

Soda and mini pies were really popular with heroin addicts. What I later found out is that management was actually told to let it slide by corporate, since everyone higher up was aware of how much money the “night crowd” brought in. I got to see many, many drug deals.

I’m convinced I saw at least one arms deal, but I of course have no way of verifying that.

Former employee here. I found out that, when making 5 gallons of sweet tea, an entire 4-pound bag of sugar goes in.

Sandwiches with round egg use real, cracked eggs. Folded and scrambled come from packaged goods in the freezer or fridge.

I also had a manager that insisted more people purchase Filet O Fish when it’s raining out because they subconsciously associate the watery weather with fish. Anyway, he did some research by poring through sales of Filet O Fish for months and months and comparing it to weather data for each day. Turns out he found something like a 3% increase on rainy days and was very pleased with himself.

Edit: Wow, I will answer some of your questions up here so people can see. The manager voiced his theory one day, and the crews all argued with him about it. This went on for a while. He was committed to proving us wrong, so he secretly pulled the sales numbers at work and did the rest on his own time, never breathing a word until he brought his printed report in to shut us all up.

He did separate Fridays during Lent and compared those days to each other in anticipation of having holes poked in his research. We still did that anyway, of course. As pointless and imperfect as the research was, it was impressive to see his commitment to giving us the middle finger!

Before I worked there , I always thought they used a grill . Turns its more of a heated press machine.

It used to be a grill. Upgrades.

8. That is unacceptable, sir.

My manager used to be on my back all of the time for ‘giving out too much sauce’.

He tried telling me the limit is one per meal.

Drop any unopened chicken nugget sauce on the ground once — you’ve got yourself a sauce grenade.

Trash compactor can make for some fun explosions too. We had a volpack of ketchup that needed tossed for whatever reason, someone didn’t realize it shouldn’t go into the compactor. I go back after hearing a bang and a scream, dude is just caked in ketchup and it shot up out of the barrel of the manual compactor and painted the wall, ceiling, and bun rack.

They have since taken away the volpacks.

6. I find this hard to believe.

The official deodorizing spray they gave us is the most pleasant thing I’ve ever smelled in my entire life.

Even now, I wish I could smell it again.

5. The little things you learn.

The pickles are surprisingly aerodynamic. They stick to walls and (if you have the stones) managers shirts pretty well.

Yeah, they fly amazing. Pretty sure me and my old crew cost that store about $1k the entire time we worked there just throwing them things…

4. Who hasn’t heard that one too many times in their life?

Sauces for sandwiches have the craziest dispensers.

Ketchup and mustard are in these really rudimentary plastic funnel things that have a paddle in the handle, when you squeeze it gravity pushes just the right amount of sauce through holes.

Doesn’t seem like it’d work well but it does if you apply the proper amount of jigglin.

The Mac sauce, mayo, and tartar though, they’re in basically caulk tubes that get loaded into basically caulk guns. You pull the trigger on the handle and a reeeeaally satisfying ratchety clanking delivers a powerfully saucy surprise for the awaiting buns. Problem is, it takes a bit of finesse because if you hit that trigger too hard you’ll blow the bun and the wad of creme right through the condiment station and onto the wall 8 feet away.

No joke, the first couple tarter splurts of a fresh tube came out so hot I’d fire a shot or two in the trash to avoid premature splatulation during the lunch rush. The first salvo, properly elevated and adjusted for wind, could clear the whole kitchen and take out the McInfantry on the cash register.

I worked at McDonalds when they first introduced sweet tea and remember that it was brewed in a large bucket mixing hot water with a full bag of granulated sugar.

It makes me sick to think about but I still sometimes crave that disgustingly sweet tasty garbage.

1. The customers are the best part.

Cool story. I worked there in my teens for a couple years. Actually worked at 2 different locations so i saw the difference in standards.

At one store there was a guy who always rode his bike to the store every single day to hangout. He was on the spectrum …”slow” and McDonalds was kind of his castle. Everyone knew him and he got a lot of free food from the employees. He was a daily part of the shift for us.

Anyway, one day he had one too many root beers. (This was a thing he normally did) because he pretended the root beers were like real beers and he would get drunk. Everyone kind of would go along with it because he was funny and never did anything to wild. Unfortunately this day he took it a little too far and ended up in the parking lot throwing bottles at cars driving by.

Long story short. Guy was arrested and he was banned from that McDonalds for life. Kinda felt bad about it because that McDonalds was his favorite place to be. He would pull thru at 3 or 4 on his bike and stay and hang out with employees until like 8. Every. Single. Day. Before that incident one of the managers even made him his own little parking spot for his bicycle, he was happy as hell.

I think about that guy sometimes. Hope he’s found himself a new McDonalds.

I don’t know how to feel about some of these!

If you’ve ever worked at McDonald’s, do these ring true? Do you have more? We want to hear them in the comments!