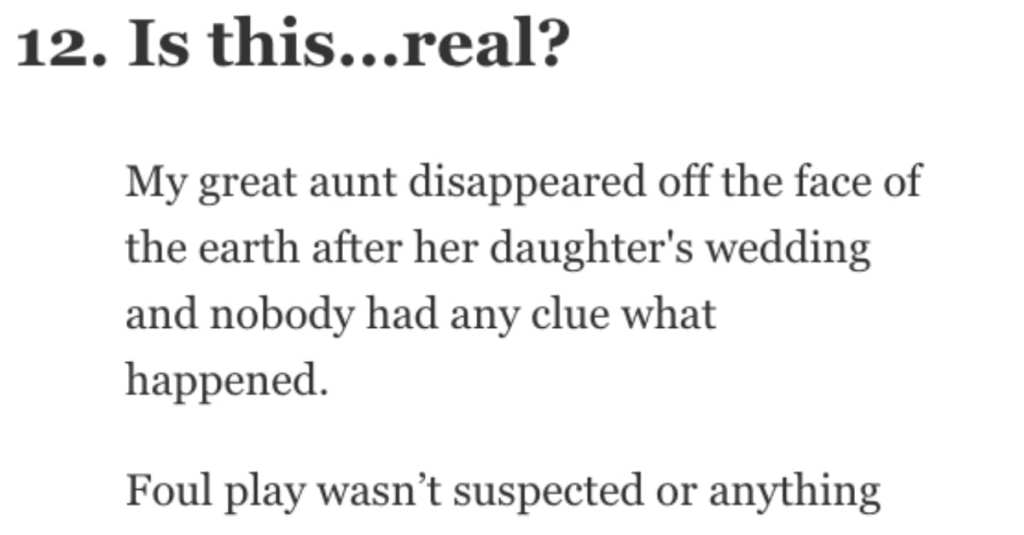 People don’t like to talk about the black sheep of their families – crime is one of those taboo subjects, I think, because it’s embarrassing to admit you’re related to someone who does bad things.

That’s what Reddit is for, though, so come and revel in the crimes committed by these 16 people’s relatives – and be glad they don’t belong to you!

My wife’s Cousin was arrested for the manufacturing of Meth, 3 times and wad sentenced to life. He, his Mom and Dad all cooked meth and supplied basically the entire area. The worst part is that during his last arrest he was taking the fall for his parents.

They were in large part why our small sleazy little trash heap of a town was one of the top 5 for meth in the United States at the time.

Last year my psychotic mother burned down my childhood home (that her, my dad, my niece, my sibling, and siblings partner lived in) because she believed my dad was cheating on her, despite no evidence and this was not the first time she accused my dad of cheating with no evidence.

Effectively, she destroyed everything we had built and kept in that home, along with my dads dog and my sisters cat (cat was burned up, so never found; but the dog died of asphyxiation in my nieces room under her bed).

Then after the fire in what I can only construe as an act of desperation, she went to my bank and stole all of the money out of my accounts because she was secondary on the accounts (I was working on changing banks, but my new bank had yet to finalize the creation of my new account). Moral of the story is take your parents off your bank accounts when you turn 18.

She’s now serving time in a county jail for the arson because she took a plea deal and got a reduced sentence, which I still believe was utter crap. She played the poor old lady act to the judge and he took pity on her that she did not deserve.

This is the woman who eviscerated my self esteem and made my life hell ever since I was born. She was toxic and abusive, never told me the truth about anything, and is a greedy, manipulative person. I feel no shame in saying that I do not care about her. She’s lost any right to my love and respect.

My uncle used to dress up with a group of friends as DEA agents in the 80’s and raid crack houses.

Only to take the drugs and consume them.

13. Interesting is one word for it.

My father committed one of the first computer crimes in the 90s. A ton of files were corrupted due to a code he created because they fired him. FBI invaded our home and arrested him.

Was sent to federal prison for four years, which was interesting because there was never a crime committed of its nature before. They made a forensics file episode about it

My great aunt disappeared off the face of the earth after her daughter’s wedding and nobody had any clue what happened.

Foul play wasn’t suspected or anything however her shotgun was missing.

Well like a month ago we found out she died last year. She had apparently skipped jury duty to go to the wedding and instead of doing anything logical she straight up ran away and lived in hiding in a backwoods town in Washington.

No letters or anything she just decided that the most effective way to get around jury duty to go to a wedding was to live in hiding for 30 years.

11. What a couple of doofuses.

Twin brothers boosted a car and rob the 711 like 1/2 mile from house. Ditched car 10 houses from theirs. How were they caught?

Officers respond to alarm triggered by clerk. Officer: Got an alarm here what happened. Clerk: Tim and Tom came in and robbed the store. Officer: How do you know it was these guys? Clerk: They are 6′ 4″ twins who come in every day. I know their shape and voice.

The car 911 operator: 911 what is your emergency. Neighbor: Was watching TV and 2 guys park a car in front of my house. One guy got out with like a windex bottle and cleaned all the door handles and door areas. Then opened door and the other guy took the stuff and cleaned the inside areas. Then they ran off up the street. Dispatch: Can you describe the 2 individuals? Neighbor: Well it was Tim and Tom the twins that live up the street from me they’re like 6′ 4″ and they are twins.

My uncle stole one of those oil candles from our table at a Hard Rock Cafe once. When we got outside he pulled it from his jacket with it still lit.

My Cousins husband got caught on a predator chasers livestream trying to kidnap a 14 year old boy.

My grandpa wouldn’t obey the train warnings. He would try and beat the train rather than wait.

1st time he got hit in his new convertible on the way to prom with my grandma. Had barely started on the payments and car was totaled. Luckily they were both okay.

2nd time was a little less reckless but still dumb. He was driving a semi and it broke down on the tracks. He kept trying to get the tractor trailer to start, rather than lose his rig and load. Semi got hit by the train, total loss and fucked up his back.

My mom set a dude on fire.

When I was young I had a babysitter, named Chris. He was the uncle of my two best friends.

He was also abusive.

He liked to do things to me in front of them. Make them listen to my cry and scream. Nothing physical, I should mention. More, psychological.

Anyway, I didn’t tell anyone about it. (And in fact only learned this story about 2 years ago). But it turns out that my best friends did.

They told my mom and she was pissed.

Soon after that there’s a party at my friends parents house. My mom goes and sees Chris. He’s all nice to her. They’re outside in the backyard.

She starts kinda joking around. Roughhousing. Messing with him.

She grabs some lighter fluid and sprays some on Him.

She lights a match.

And she lights him on fire.

According to my mom, he was put out quickly so he was fine.

But she told him that’s what its like when you’re scared for your life. And then she left.

Apparently he flew back to Florida the next day.

She shoplifts everything everywhere she goes.

Her daughter just turned 1 and she has stolen every bit of formula her daughter ever used.

My brother got completely inebriated one night and stupidly drove home.

He woke up early in the morning to the sound of a baby crying. He looked around and noticed he didn’t recognize the house.

He quickly got up and walked outside to his car halfway in the driveway/street and still running. Got in his car and drove away as quickly as he could. Turns out it was some random house about 5-10 minutes away from our actual house.

He never knew whose house it was and never got caught. He also slowed down his drinking after that.

4. Every family should have lore.

My dad’s cousin erased all family member names from a property deed except for his father’s. The paperwork had been water damaged so there was no easy way to tell what should have been there.

Family lore says that he also paid off some local politicians / office workers to make the new deed stand.

In college we got a new printer and printed off a bunch of fairly convincing $20 bills, roughed them up and used them at a bunch of fast food restaurants.

Didn’t realize how dumb it was until years later.

A distant cousin got her terminally ill father to give her power of attorney and then stole all of his money so she wouldn’t have to split it with her brother.

Don’t worry, she did go to jail as her rush to clean him out involved a lot of fraud and forgery.

My father, when I was still very young, used a fake name and pretended to be a wedding planner for a young couple. That young couple hired him, since he seemed trustworthy and is an excellent liar, giving him access to their savings for wedding supplies and such that would be needed.

Instead, he stole all of the money out of their account and then ran away with it. As far as I am aware, he was never caught and the money was never returned to them.

The worst part is that the poor couple never even got their wedding and had almost nothing left afterwards.

I honestly don’t know how I would handle something like this.

If you’ve got a crazy criminal in your family and want to share the details, our comments are open!