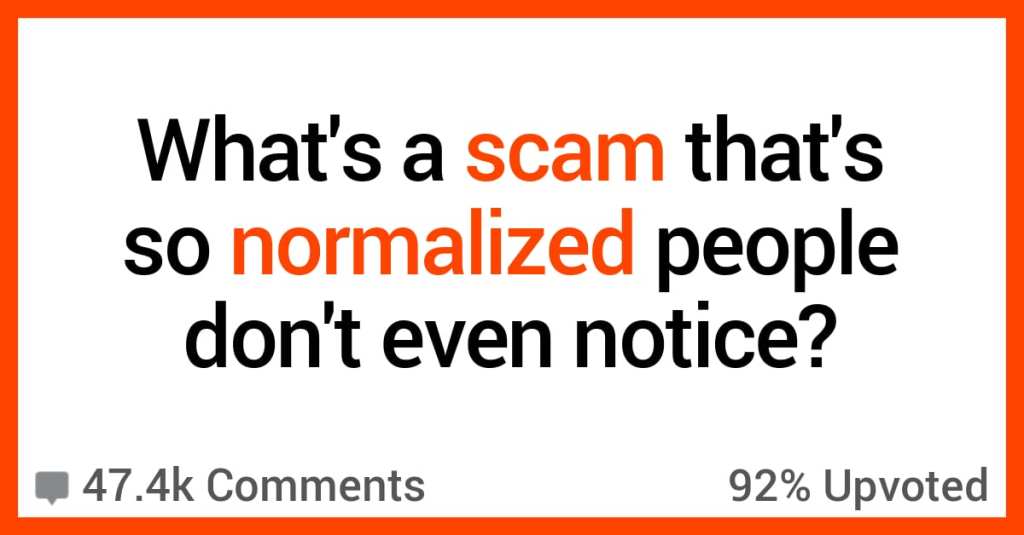 Have you ever noticed that something new will come out, people will freak out about how unfair it is, but then a few years later it’s just part of our everyday lives and everyone seems to have forgotten we didn’t like it?

There are a surprising number of things in this world that we actually know are scams, but the companies just keep going, and we get used to them, and that’s that.

If you want examples, well – here are 13 that might surprise you.

13. If stuff doesn’t happen…shouldn’t we get our money back?

“Sorry, we’re not selling new policies in Your Area right now because Thing just happened” where Thing = earthquake, wildfire, flood, and other things you might … want to insure against?

“You submitted a claim? We’re going to triple your rates FOREVER after this.”

12. Your money should work for you.

I know times are tough y’all but as someone who works in the financial industry if you don’t already have a high yield savings account for your liquid funds I strongly recommend it. Ally, Cap One, Amex all offer decent rates for what it is.

Earning a few dollars in interest is way better than the pennies your big national bank is paying you.

As far as stocks: it’s a great idea for funds you’re not going to be expecting to use for the next six months to a year. Time in the market is essential, you don’t want to attempt to become a day trader. Index funds and mutual funds are your friends.

hose portfolios typically track a certain aspect of the market and average out your returns; it’s fun to pick individual shares of companies you know but that’s something you really have to sit down and weigh the pros and cons on.

Always do your own due diligence, and this is not even considering taxes. I’m definitely not a CPA.

Idk if anyone remembers Power Balance bracelets from the early 2000s. A lot of celebrities and athletes advertised for them and they claimed to improve your balance and overall health.

Well being a rubber bracelet made in a factory, it was all nonsense but they still sold millions of units before shutting down. A new company owns them now and you can still buy them though

Those registries that people pay money to “name a star.”

9. We’re slowly figuring this one out.

Paying for cable tv. The whole idea of paying was to create a revenue stream separate from that of marketing. There are a few out there (HBO, I think) but generally we pay to access the content and still have to spend 20% of the time sitting through commercials.

Then streaming comes in and were free of advertisements again, for a bit. Now YouTube has tons of ads and other streaming services are talking about adding ads as well.

Idk if it’s normalized but McAfee security service. In my own experience with the service, it’s done literally nothing for me except pop up every time I open my computer or nearly every 4 hours or so.

I remember my ex gf’s grandma who fell victim for the service. I tried to talk them down from it and not to pay the service but I was much too late for any semantics. So I just took it to memory that every computer already comes with security software and any outside security software, if not installed properly, checked with 100% concentrated power of will, you’re going to have a bad time.

At least, I’m convinced that the McAfee service is just a virus that makes you pay similar to some of those other viruses that get your photo via your personal webcam, lock your computer and show you a copy pasted photo of a “legal document” urging you to pay a ransom, what was it, ransomware.

So my belief is that Even though most people may use McAfee as a computer firewall security service, it’s more than likely a scam. Downvote me to hell, but at least convince me otherwise first.

6. They’re there…but not on the internet.

Hot milfs in your area.

It is my understanding that they are interesting in meeting me TONIGHT.

Reducing a price by 1 cent to trick our brains into thinking a product costs less than it actually is.

Manufacturers refusing documentation to private repair enterprises and requiring you to get your products fixed by the dealer.

Basically, the reason for the “Right-to-repair” movement.

I used to work with John Deere and they were terrible about it. Farmers are looking for older equipment because they don’t have those software lockouts.

3. I miss the happy beginnings.

Social media. From their happy beginnings they are now mostly a funnel used to ram as many advertisements into your mind as inhumanly possible. “Sponsored Posts” every third or fourth item – I see you, IG/FB/Red/etc. And that’s not even mentioning the extensive filtering network that “curates” the information you get to see when you are looking for something. “Curated information” is just a nice expression for you being conditioned to form certain opinions / buy more stuff. Social media groom minds.

. . EDIT: Wow, over 11k upvotes! If we may assume that 1 in 10 people bother to vote at all, this means that my post has been seen by over 100,000 people! This illustrates the amazing power of the internet.  The irony is not lost on me that my most popular post ever should be about how social media have become overly commercialized to the point of being a scam =)

Things I learned from the comments & some light research:

Many of you quoted the old saying “when the product is free, YOU are the product”. The earliest attribution that I could find was to an artist named Richard Serra in 1973. To this I could add, “there is no such thing as a free lunch”.

Building and running the internet is not free. In fact, several sources state that the internet consumes over 10% of the global electricity supply.  Let that sink in for a bit…  Using 10% of the global electricity supply is equivalent to running about half the USA (or Germany + Canada + South Korea + France + UK + Italy).  Put another way, 10% of global CO2 emissions from electricity generation are due to running the Internet.

If we estimate that 50% of internet activity consists of sending around advertising and spam, we have to ask ourselves: is that really worth spending 5% of the world’s entire electricity supply on?  Or would it not be better to dial that fluff wayyy back and start charging users a fair fee?  Speaking for myself, I believe that the internet is an invaluable addition to our lives and I would be willing to pay a fair & transparent fee for an ad-free, tracker-free, spam-free, bot-free internet experience, certainly if that means that we will also save 5% of the world’s global electricity. Note that I am not saying the Internet should be censored, far from it!

Of course, designing and implementing something like that will be very difficult; I think we will need to look to the EU for innovations in this space.

I also learned that my ad blocking settings were overdue a refresh. I found that on my iOS (iPhone, iPad) in particular it is hard to find effective ad blockers.  This is due to the fact (TIL) that Apple does not allow browsers other than Safari on iOS; the Firefoxes and Chromes you download on those devices are simply copies of Safari with a different jacket slapped on to it (for which Mozilla and Google pay Apple a pretty penny no doubt). This means that spectacularly effective open source ad blockers that should work on Firefox and Chrome and the like, won’t work on your iPhone and iPad.  With some digging in the app store I did find something that seems to work, but let me not advertise here.  Suffice to say, it is useful to periodically update your ad blocking system and it seems that (free) open source blockers are the best of the bunch.

Am I contradicting myself by saying that: (1) I am willing to pay a fair price for my internet use but (2) at the same time I am installing ad blockers? Yes a bit – but I install the ad blockers mainly out of a concern for my privacy, which I believe is under heavy attack. Also, I believe the internet media have crossed a line – I mean I can put up with some (clearly identified) advertising here and there, but who would enjoy a newspaper if at least 25% of it would be overt advertising and maybe half of the rest cleverly disguised highly personalized paid content?  If I can take a pair of automated scissors to such a rag, I believe I should.

2. Apple is king of the monopolies.

iPhones disabling themselves if you put in 3rd party parts. I can understand shutting off a certain aspect, but not bricking the whole phone

1. There are always more coming.

But if you send me $19.99 I can show you how to turn the tables on the scammer and get HIS money.

I don’t want to say humans are basically sheep, but…we definitely prefer the roads with less resistance, don’t you think?

If you can think of more examples, drop them in the comments!