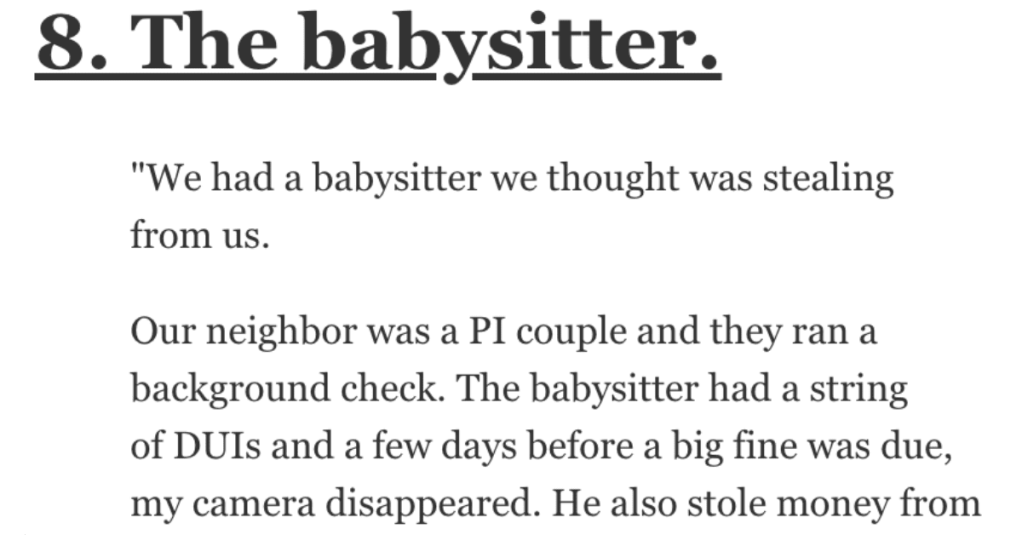 People Share What They Learned From the Private Investigators They Hired

I’ve never hired a P.I. and I really hope I never have to….

That being said, I sure do enjoy hearing stories of other people who had to, because they can get pretty wild.

AskReddit users shared their stories about what they ended up finding out from the private investigators they hired. Let’s take a look.

“My Dad got my Mom pregnant when she was 15. Her Dad forcibly put the child up for adoption.

Nobody ever talked about it but I found out about it because my Dad became an alcoholic who would blackout and talk about what was bothering him. He couldn’t take the losses of his oldest Son, My Mom who cheated on him, and the death of my little Sister.

My (now) ex-wife decided that she wanted to find my older Brother but my Paternal Grandfather would not cooperate. She asked my Mom about it and got as many details as she could. I was against looking for him because he probably didn’t know that he was adopted and I didn’t want to screw that up for him. After she got my parent’s hopes up I agreed to hire a P.I.

The next day we had pictures of a guy who looks like my Uncle, a website to a small company that he had founded, and links to his profile for a lot of the high profile jobs that he’s had. We found out that he had been adopted by a college professor at what I would call the Harvard of the Midwest. The guy had a good life, much better than he would have had.

I gathered the P.I.’s report, pictures of his biological family, and some medical information that might be of use, and I sent him a package via certified mail. He never responded.

Years later I found out that he was divorced around that same time so I thought that maybe his ex didn’t give him the information. I joined FaceSpace just to find him. He was there with pics, so I knew that it was the same guy. I sent him a PM stating who I am, why I was contacting him, and why he had been put up for adoption.

I added the request that he would, at least, tell me to go to Hell or something so that I would have some kind of closure for my parents. His page went private and I never heard from him.

My Mom died a few years ago. She was glad to know that he was well, and successful but never got to meet him. My Dad is doing very well now but I know that it still eats away at him.”

“My law firm had a bad faith insurance case several years ago. A guy had gotten hurt at work. He claimed he was disabled because he hurt his back, and could not lift anything or really engage in any type of physical activity.

His disability insurance carrier failed to handle the claim and pay him what was owed.

There was a potential for relatively large damages. In fact, the carrier filed in the court case what is known as an Offer to Confess Judgment. It’s a way of agreeing to let judgment be taken for that amount. The plaintiff can accept the offer or reject it. However, if he rejects the offer he is responsible for the defendant’s attorneys’ fees if the verdict ends up being less than the amount of the Offer to Confess Judgment.

A few weeks later our PI found out that the plaintiff bowled every week. The PI got video of the plaintiff bowling and copies of his score sheets going several years back through the date of the accident. It was clear he really was not disabled.

He also found that plaintiff had been in a car wreck and was making identical injury claims to the other driver’s insurance carrier.

We filed a motion with the Court to dismiss the lawsuit based upon fraud and perjury. The Court set the motion for a hearing, but before that happened the plaintiff dismissed his lawsuit.”

“A friend hired one because he was suspicious his stepdad was being unfaithful to his mom. So, he asked me, and I put him in contact with a guy I knew.

Also his bio dad walked out on him and his sister when my friend was like 4. It took a while, but my friend warmed up to the guy and he’s a good guy (took my friend and I to an 49ers game once which was pretty cool).

Anyways, the PI said he wasn’t cheating. Apparently there was a house on the market that my friend’s mom wanted, and he bought it. He had been remodeling it for some time and he kept it a secret.

As a 5-year anniversary gift to her, he bought it. Anyways, they live in a five-bed house now.”

He refused to believe the PI and his brother robbed him blind. Took a huuuuuge amount of money and left him with gigantic debt. He still forgave him.”

“Back in the ’90s my dad had a friend who owned a Renault Clio Williams and one day someone stole his car (the car was located in Athens).

So after reporting the event to the police he really wanted to get his car back (because it was expensive) and he hired a private investigator to find his car. After like a week he received a call from the investigator telling him that his car was located at a junkyard outside of Thessaloniki.

So he went at Thessaloniki and found his car, so he rushed inside a police station to inform them that his car is located at X location. Believe it or not the officer told him not to mess with the owner of the junkyard (this junkyard was known for stealing cars etc) and hope he will get his money back from insurance.”

“My sister (mid 30s) is adopted and hired one to find her estranged biological father.

They came back saying that not only was he still alive and nearby, but he had a daughter. Meaning she also had a biological sibling!

Further digging from the PI uncovered that they weren’t just similar ages either, they were exactly the same age. The evidence suggested that my sister had a twin and her birth father had taken the twin and vanished.

Eventually, through more incredible detective work, the PI realized that the daughter was actually just my sister. There was no other sibling and they had just been investigating my sister the whole time accidentally. Needless to say, we asked for the money back.”

“My little brother hired one to find his dog. He was living in L.A. and his complex let the dog out on accident.

Small dog some mutt of toy breeds. He looked on his own for two weeks and was devastated. My folks found this guy in Indiana who was like $3k to hire but he guaranteed he’d find the dog or he wouldn’t get paid. My folks and I chipped in as my brother couldn’t afford that.

The guy found my brothers dog inside of a day. Sh*t was wild.”

“We had a babysitter we thought was stealing from us.

Our neighbor was a PI couple and they ran a background check. The babysitter had a string of DUIs and a few days before a big fine was due,  my camera disappeared. He also stole money from my kid’s piggy bank.

He sort of disappeared but was also really into Instagram so I surreptitiously followed him. He started babysitting again for a single mom (easy target) and posted a lot of ‘fun’ pics with this family. I tracked down the mom and sent her a long email detailing out his whole scam. She said we were right and it was clear he’d been stealing from her business.

He has since gone underground but I still Google him regularly to see what he’s up to. He’s been able to avoid arrests for a while now.”

“My grandmothers first “boyfriend” after my grandfather died said he was a retired cop and a veteran. They enjoyed dancing to country music together, and bought a new car, in her name though, even though she can’t drive anymore.

My uncles hired a PI. Turns out, that old b*stard had a habit of shacking up with widows and bleeding them dry. (The boyfriend not the PI).”

“My grandfather once hired a PI to investigate my grandmother.

While spying on her from his car another investigator he knew came up frantically to his window and was like “what are you doing here!?” To which his response was obviously “What are YOU doing here?”

Turns out my grandmother was being investigated by the DEA for drug dealing. I don’t think anything came of it that I know of but we’re all pretty certain it’s the reason the old family barn was burned down. That woman if batsh*t crazy and this isn’t even the worst/wackiest story I’ve been told about her.”

“Hadn’t heard from my mom since I was about 15 (very unstable due to drugs and alcohol etc).

When I was 29 I decided it was time to find out what happened to her. I figured if she was a Jane Doe somewhere then I could put her to rest, and if she was alive then I wanted to let her know that I forgave her. Hired a PI to help… I guess she was moved by my story and so she also ran info for the man my mother was apparently married to (on the house).

And with one clue from his report I was able to track them down. I wouldn’t have found my mom (alive and was just starting out on recovery after being homeless and addicted for many many years) if it wasn’t for the PI who kindly ran an extra report for free.

Mom has remained sober now for about 7 years and is probably the healthiest she’s ever been, physically and emotionally.”

Mom was taken in by her grandparents, but she always wondered why her dad left and what became of him. In her 40s, she saved up a bit and hired a PI to track him down. Turns out he moved over time from Pittsburgh to California where he wound up in prison for armed robbery and so e other violent crimes. He died in San Quentin penitentiary.

I think mom got a lot of closure out of that. She was able to see that life would have most likely been even worse had he stayed. At least living with her grandparents, she was loved and raised to fulfill her potential.”

Have you ever hired a private investigator?

If so, how did it turn out?

Share your stories with us in the comments. Thanks!