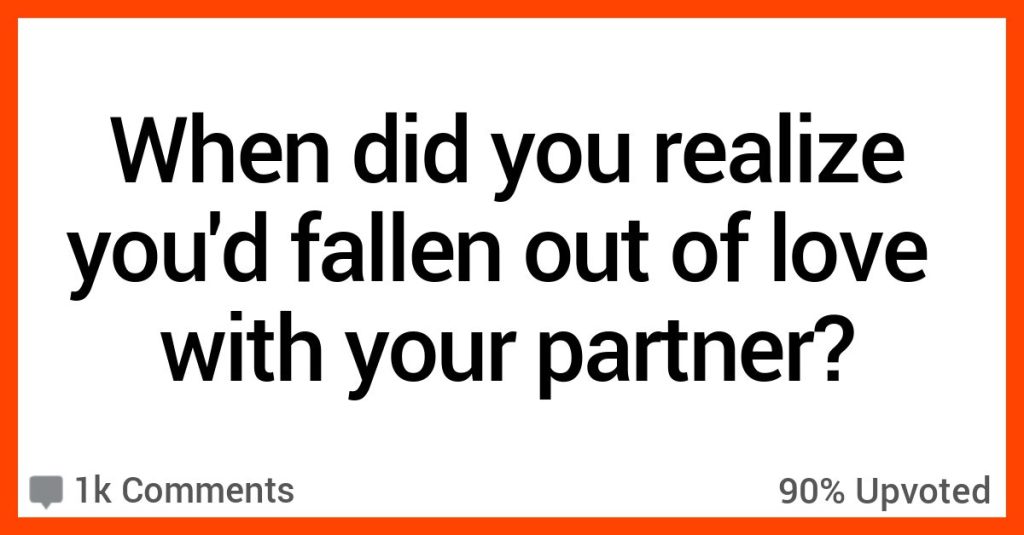 As a society, we spend a lot time romanticizing the act of falling in love, but what about the usually inevitable counter event – the falling out of love?

Statistically speaking, we’ll fall out of love far more times than we’ll fall in love, and if you’re wondering what those awful moments were like for others, these 16 people are here to share.

“When I would talk to him about my depression and eating disorders, he told me I needed to stop burdening him with my issues because he was my boyfriend and not my therapist.”

“When my sister had a tragic car accident and died, I went crying to him and he tried to seduce me.

And then I was planning my sister’s funeral with my family and simultaneously watching him cheat on me in real time.”

“He left his Facebook logged into my phone and was inviting his ex over because I was too busy planning the funeral. Piece of s*%t.”

“When my now–ex-boyfriend admitted to me that he had no plans to tell his family about our relationship and we would always be ‘a secret.’

“When he wanted me to get rid of my dog.

My family lives thousands of miles away, and the dog is all the family I have.

The dog is not going anywhere!”

“I lived with my fiancé in college. Nice guy, but he didn’t go to school, have a job, or have any real ambition, and it drove me insane.

I’d be out of the house all day between classes and work, then come home to him playing video games.”

“He’d play until 1 every morning and repeat it the next day.

I realized I was falling out of love with him when I’d rather be at work than be at home with him.”

11. At least she realized then and not later.

“My first inkling that I was not as in love as I wanted to be was when I found a receipt for an engagement ring.

My immediate reaction was, ‘No f**king way.'”

10. We all deserve more than this.

“We were together for almost three years; we’d already made plans to get married, and I was spending my days looking through Pinterest for wedding ideas.

I would ask her opinion on things, and she would say she didn’t care.”

“It didn’t bother me at first, but over time, I just felt like loving me was an obligation for her.

She never seemed to care about anything; she was indifferent toward our whole relationship.”

9. This one hurts my heart.

“He walked out on me two months after I was diagnosed with a rare type of cancer.

When he finally called me, he had driven halfway across the country and wasn’t sure when or if he would be back.”

“He knows that I have no family to support me. Nine years together with almost no fighting, and our marriage was over. Since then, he doesn’t answer my phone calls and barely responds to important texts, unless it is to inquire about our divorce papers.

I’m not sure if I’ve fallen out of love with him or if I’m just telling myself that so I don’t break into a million pieces.”

“My son had brain surgery to remove a brain tumor. After my son was allowed to come home, I realized he was having a spinal fluid leak out of his nose. I ran to my bedroom to tell my boyfriend and urged him to get dressed because we had to rush my son back to the hospital. He said he had other things he wanted to do rather than accompany me to the ER.”

“Talk about being hit with a two-by-four. When I got my son to the ER and they confirmed the spinal fluid leak, I had to walk out. I cried and cried. Then I sent my BF a very long text and told him to pack up his shit and get out of my house!”

“We volunteered to foster kittens. Seeing how little patience he had with those innocent little fluff-heads made me see him from a different perspective.”

“I remember the exact moment: He got angry at a kitten for not wanting to play with him and how it was hiding under the couch. I kept saying to him, ‘She’s scared, just leave her alone. She’s allowed to hide until she feels safe.’ And it was like, damn…that’s me.

The very next day, I started planning my escape. I never left him alone with the kittens we fostered, and I gave the animal shelter a heads-up so he wouldn’t be on their foster list anymore. Got rid of my BF but ended up adopting a kitten.”

6. That’s only going to escalate.

“As soon as I started seeing signs of aggression.

One time, he threw a bowl of salsa across the room because he bit his tongue.

It was excessive and unnecessary.”

“Married for 32 years. Both of us were very active, and over the years, we often commented on how we could never see ourselves without the other person. At around year 20, I was diagnosed with a degenerative disease.”

“I shared all the info and prognosis with him; he was supportive in many ways. Over time, I started to slow down, but the first time he saw me in a wheelchair, he just stared at me and then walked away.

It was like a knife in my heart because I knew at that moment that I didn’t want to be with someone who would look at me with pity/disgust or would never again see me first and not my disability.”

“When I was with my ex, I had to pick him up from work one day, so I made an effort to fix my hair and makeup and put on his favorite perfume.

When I arrived, he accused me of getting dolled up for someone else and aggressively insisted I cheated on him. Gross.”

“I realized I was done after I was complimented by a coworker on my appearance and performance (I’m an actor).

The compliment took me completely by surprise because it had been so long since I heard anything positive like that from my husband.”

“How happy a simple compliment made me led me to realize what I was missing out on.”

2. When the future stumps you.

“My boyfriend of four years and I had been seeing a couples therapist. She told us to make our own individual five-year plans and compare them.

For the life of me, I couldn’t make mine include him. I ended it a few months later.”

“When he left our infant son in the car for half an hour, then lashed out at me because I was upset over it.”

It’s so sad, don’t you think? But you can’t move into the future if you’re stuck in the present.