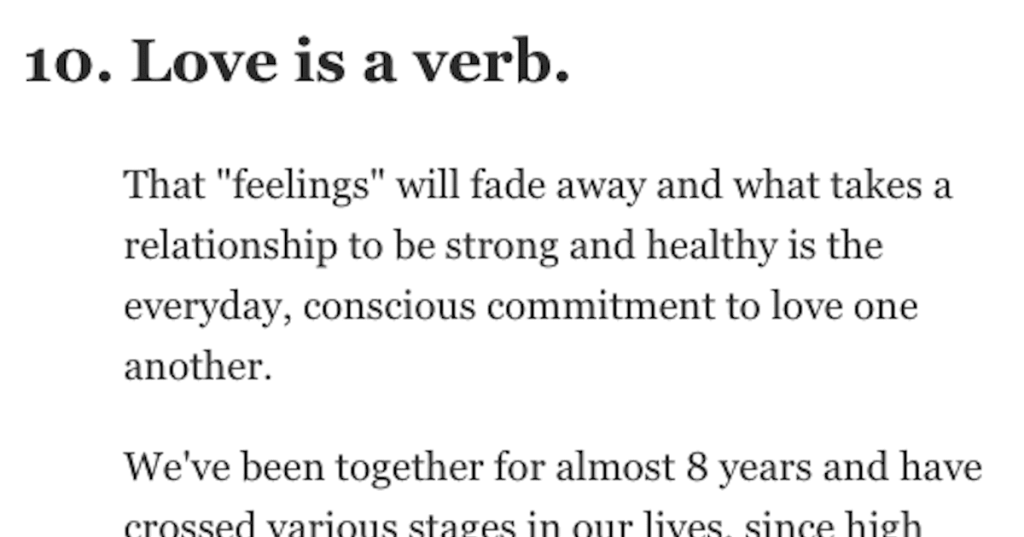 You ever hear that saying, “Everything happens for a reason?”

Yeah… do they though? Don’t things just happen because they happen? Of course there’s a REASON… but it doesn’t pertain to your life. Usually.

I’m more sympathetic to the “silver lining” philosophy, though. That being that even in the worst of circumstances, there’s something that can be learned. When we think back to relationships now long over, we may mostly feel pain or regret, but there’s gotta be something there to learn, as one Redditor asked recently.

So, what did young love instruct us in?

You want to date “a person”, not “their company”.

Don’t let go of your self-respect.

Just because you treat someone well doesn’t mean they’ll return the favour, and the amount of people you can trust in this world is a lot less than you think

That despite how much you love someone you can be incompatible.

At least I know now what I need from a relationship

Being alone is better than forcing yourself to be with someone you don’t love.

That screaming at each other during arguments is not healthy

8. Things may come back to haunt you.

Never send sexy pictures with your face in them.

Doesn’t matter how in love you are, people get cruel after break ups.

Even if they say they love you, they don’t always mean it 🙁

That “feelings” will fade away and what takes a relationship to be strong and healthy is the everyday, conscious commitment to love one another.

We’ve been together for almost 8 years and have crossed various stages in our lives, since high school, college, and we’re still together as she studies for med school and I as I pursue my career as an accountant.

We wouldn’t last this long if its just due to being “excited” for each other, which we actually still are haha, but its because of always making time and being committed to support each other no matter how busy we are, while still giving enough space.

That you should never take any relationship for granted – you always need to make efforts and work towards keeping a happy relationship with the ones you love.

Didn’t do it back then (at least after some years), but at least it taught me how to do it for future relationships, so I guess that’s nice

I also learned that being in a happy relationship means that you (as well as your partner) need to make compromises from time to time – because nobody is always on the same page with everything. But in the end of the day, if you want to be a team, you need to make it work. Once somebody is not willing to do that, the relationship is going down the drain …

You can’t make someone love you simply because you do so much for them.

Doormat is not a good look on anybody! Also listen to your gut.

How important pillow talk is.

That when everyone around you is saying that you guys are just the perfect couple and despite no real relationship problems something in your gut is telling you something is wrong, you should listen to that gut feeling.

That relationship ended 17 years ago and I’m still dealing with all the fallout.

Use condoms. It’ll save you A LOT of problems.

Valuable lessons, all. Now if only I’d learned how to GET a girlfriend sooner…