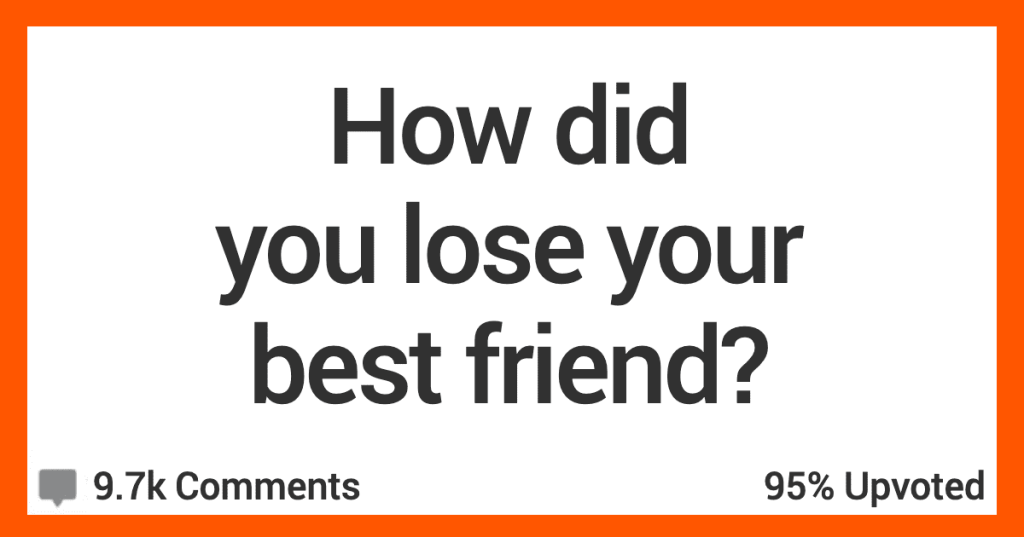 16 People Share The Sad Story Of Losing A Best Friend

No one wants to think about losing a close friend, never mind someone they would classify as a best friend.

That said, life happens to all of us. Sometimes it’s sad, other times we realize it’s for the best even though we don’t like it, but most of us have experienced losing a close friend at one time or another.

These 16 people are sharing the stories of how their once-best friend exited their life.

She passed away aged 26.

15. It can happen in non-romantic relationships, too.

I became basically obsessed with her and it just became too toxic.

He drank himself to death two years ago this Friday. He was 35.

I still think about him every day.

I’ve loved the guy forever but we recently spent a bachelor party weekend together and I finally came away from it thinking that I don’t really know this guy anymore nor do I like him.

12. Sometimes they don’t leave you a choice.

I moved out of our apartment when I got tired of his boyfriend doing nothing but play League of Legends all day long. I was the one paying for the internet and transferred it to my new apartment, and decided not to share the login information so they could use the crappy xfinity open internet, and apparently that’s all it took. From that moment on I was the enemy.

I learned my lesson in just how little I was valued in that friendship.

I lost my best friend to meth last year, he is still alive but he is gone from us now.

I pulled away from everyone because I didn’t want to inflict myself on them.

Friend moved to the other side of the planet, with their spouse, to be nearer to both their families.

I never understood what real friendship was before friend was in my life; and now they’re alive, but not here.

He took my money twice, once straight up taking the whole a$$ wallet too. On another occasion he wanted to “borrow” my Gameboy Color and my extra copy of Pokemon Yellow.

Important detail is the quotes around borrow. Motherf**ker never brought it back, probably never played it.

Supposedly he did s*%t like this for drugs. But on other occasions he has stolen things just for the f**k of it, so who knows.

I was not the only victim.

Even after we split we stayed close, co-parenting, helping each other out. She died 3.5 years ago. I could have made peace I think but after her death and our daughter was living with me full time I found out about how abusive my ex had been to her when I was around and it felt like losing her all over.

Like I thought I knew who she was in the 13 years we’d had both together and separated, but it turns out I knew nothing. Now I’m just angry about it, like how dare you get to do this s*%t and then leave me to clean up your mess.

How dare you have peace when my daughter has nothing but struggles and therapy.

I feel like we were robbed of the good person, the good mother I thought she was.

6. Well this is terrifying.

Best friend/roommate and I were watching quantum leap (episode “So help me God”) when he suddenly jumped up and yelled “OH F**K”! He promptly collapsed and hit the floor. I tried to catch him before he bounced off the coffee table but ended up going down with him.

Realized when doing CPR he was dead. Hypertrophic cardiomyopathy, a birth defect, his heart exploded basically. He had strep for a couple weeks and was struggling with it, this ultimately is what caused his heart to give.

When he left the apartment that morning to go to class I remember thinking “Geez he looks horrible, he might die…”

Drank for a year solid after that.

It’s such a miserable existence. If they’re on the correct dose, they’re supposed to not feel anything, and the methadone is just there to occupy their receptors so they don’t go into withdrawal.

My understanding is that a lot of people at those clinics abuse the methadone and claim that they need to be on higher and higher dosages.

I noticed that he never came to my place to catch up. I stopped going over to his place to see how long until he noticed….

Honestly, they just expected more out of me than I was capable of giving.

Over the years I have observed in number of friendships that its always me that makes the call. They always are delighted to hear from me. If I organise something they come.

They just don’t make the effort. I have been best man five times so I don’t think that its because the friendships are not valued.

I don’t know, am I missing something?

He stayed up all night putting finishing touches on a senior term paper in high school. The deadline for the paper was unforgiving and at least one person missed the deadline every year. Paper was worth 50% of the term grade. He was a smart guy, top 5 in a class of 500.

Anyway, he didn’t show up at school the next day. Around mid day they announced his death due to a traffic accident on his way to school.

I’m not sure he was my best friend though he was a very good friend, but I’m pretty sure I was his best friend.

These are pretty sad, but some of them are typical, too.

A good reminder that nothing is forever so we should enjoy it while we can!