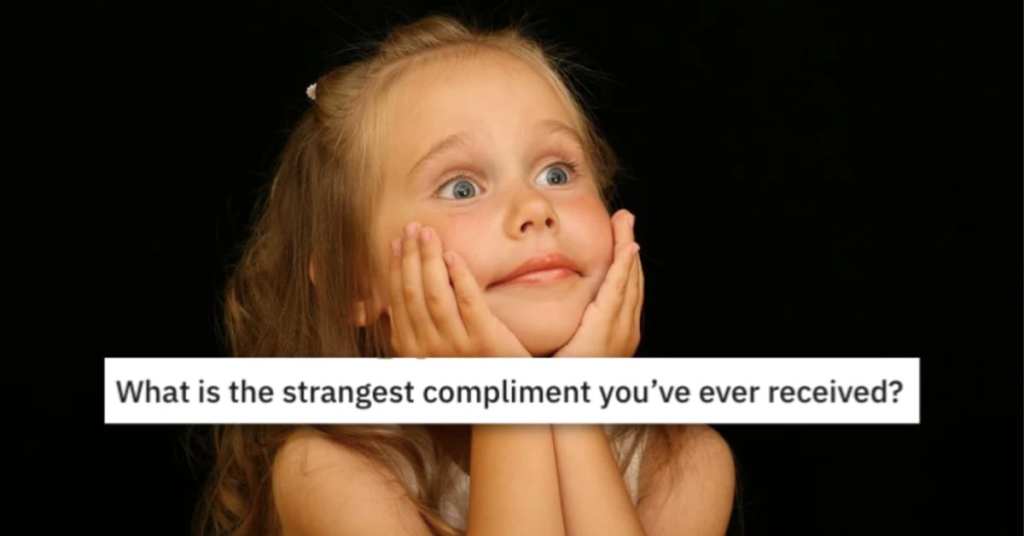 Compliments are strange beasts – it can be a process to learn to accept them, giving them can feel awkward, and since people have different ideas about what, exactly, a compliment should be, things can get downright strange.

As is the case in all interactions between human beings, because yeah. We’re just awkward and weird blobs of flesh and bones around brains that have no idea what they’re doing when it comes to communication.

This was from a very drunk man who was taken by my vanilla perfume, and then proceeded to bring all his friends over to sniff me…

“90% of women you meet won’t like you. But the ones that do are gonna be obsessed with you and hang on your every word. You have the charisma of a cult leader.”

Something like that. I still don’t know what to think of that.

14. There is an idea for a novel in there somewhere…

At an airport an employee said, “You look like you should be somebody.”

After I said something like “Thanks…I think,” he then clarified that he meant like an athlete or actor. I do think it was meant as a compliment, but since then I’ve been haunted by the feeling that I haven’t lived up to my potential.

I was told that I have nice legs by some random guy that didn’t have legs at Wal-Mart once.

When I was young and getting a physical from a doctor, she was kneading my boobies for tumors and such, when she said “huh, your skin feels like bathing suit material.”

She seems equally stunned and replies with, “no, I don’t think so…”

“You look like you could beat a door down,” in response to asking how a pair of shorts looked.

10. Good legs are not gender specific.

“I don’t know if that person over there is a guy or a girl but I would kill to have their thighs.”

9. The grass is always greener I suppose.

Not me, but I’ve read on another thread that a shy, unsocial guy was once told by his classmate (who was being repeatedly bullied in school):

8. I have no control over this, but okay.

Your nipples are the most erect I’ve ever seen

7. I’m sure he meant it as a compliment.

6. This is the worst, creepiest compliment in the books.

“You’re pretty when you cry.”

5. Teacher roasts are the best.

After cutting my hair really short :

My economy teacher : “I trust you. You are from the Mushroom Kingdom, I trust you.”

This day I learned that my hair inflates like crazy sometimes.

“Damn, do you have a brother? Cause I would fuck the shit out of him”

3. In an already awkward situation…

My OB/GYN, in the middle of my Pap smear, said, “you have a wonderful pelvic floor.”

I wasn’t sure what to say, but my brain went on auto and said, “thank you”.

He just nodded and continued the exam.

2. I’m sure your dad is very handsome.

Were you a cesarean baby?

Because you have the nicest shaped head.

These are hilarious – I would have had no idea how to respond to them!

What’s the strangest compliment you’ve ever received? I once had a homeless man in Soho tell me he wanted to lick my elbows, so that’s mine – share yours in the comments!