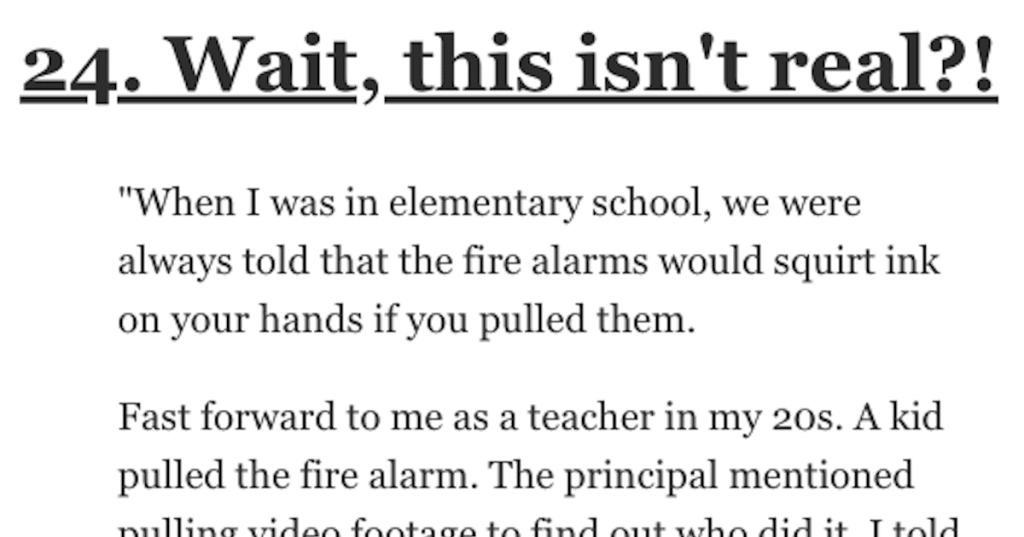 I remember the dumbest lie I ever believed when I was growing up.

A kid in my neighborhood had a whole group of us mesmerized one day at the bus stop telling us his epic story…the night before, he had actually seen THE FREAKIN’ EASTER BUNNY hop out of his house.

Yes, the night before was Easter, so it totally made sense to our second-grade brains. We were all blown away…and apparently, we were also pretty dumb.

I believed this for years until I actually bothered to read the bottle and realized it was just vegetable juice.”

“My husband’s dad told him that the hazard light button was the “self-destruct button” of the car.

First time he saw the hazard lights get turned on, it terrified him.”

“That carrots help vision. It was WWII propaganda.

“…the British government—aided and abetted by Walt Disney—told Britons that eating carrots could sharpen their eyesight and help win the war….

Portraying carrots as a night vision-enhancing superfood had another benefit—hiding a secretive English radar technology from the Germans.”

“The American dream of “If you go to college, work hard and study hard you can have a good job, great life and be happy”.

That’s not how reality works.

A lot of the times it’s a mixture of dumb luck, right place/right time and/or nepotism.”

“Galileo was burned for saying the earth revolved around the sun.

He was actually excommunicated for mocking the pope…

A pope that was supportive of his work.”

“That the wind turbines that failed in Texas this winter are proof that wind power is not reliable.

Fox viewers believe that to this day.”

“That you need to drink 8 glasses of water a day.

I cant even drink 8 glasses of anything else.”

“Growing up my mom always told me that i have to eat two bananas together because if I eat just one the banana won’t give me any potassium.

It takes two bananas to work together to activate the potassium release.

“You have to go to college if you want a good paying job, otherwise you’ll be working as a garbage man.

“My grandfather told me he got his gold tooth from not putting his tongue in the area he lost his baby tooth from.

I’d try to get a gold tooth every time but I’d always cave at like a day or two.”

“That your tongue has 5 taste ‘bud’ centers, each in different areas of the tongue.

They made us do a taste test in jr high.

I couldn’t taste what the hell they were talking about.

Dumb enough to get a primetime tv show called Finding Bigfoot, too.”

“When I was in elementary school, we were always told that the fire alarms would squirt ink on your hands if you pulled them.

Fast forward to me as a teacher in my 20s. A kid pulled the fire alarm. The principal mentioned pulling video footage to find out who did it. I told my principal “just look for the kid with ink on their hands!”

My principal was confused at my comment until I gave more detail. It was only then that I realized I still believed a lie told in elementary school!”

“That there are hot singles in my area looking to meet me.”

“Unions are bad for workers.

My job is unionized and we get 4 breaks, $22/hr, basically f**king free health care (a guy got 4 X-rays and paid nothing) and the company is still profitable.

“A government providing financial aid to citizens in need (even during a global health and economic crisis) is a form of Communism and should never even be considered.

To be clear, I never believed this, but many others do.”

“I heard this one a couple times when I was a kid:

“God is so precise in his designs that if the earth was a few inches closer or farther away from the sun we’d burn down or freeze.””

“My grandpa used to tell me that story where he went to hunt one day and, as he was focused on hunting, a snake ate his leg.

Then he cut her open from head to tail in a rage attack but felt guilty after a while and sew her together again. She ran away and his leg grew back some time later.

Why I believed that, I have no clue.”

“You give birth when the doctor puts a key in your belly button and opens it to get the baby.

Was mind blown a decade later when they told me how kids were actually manufactured.”

“Growing up my dad told us kids that eating pie without ice cream was poisonous.

My mom thought it was funny until one day, when my dad was working out of town, she tried to feed us pie without ice cream and we all believed she was trying to poison us and would not eat it.”

“My dad told me that one time, a leprechaun stole his newspaper off the front porch.

He didn’t get a good look at it, but he saw it running away down the street.

I believed that stupid story for yeeeeears.”

“My grandma said she worked in a factory that made our Christmas presents.

I… I believed it longer than I care to admit… And I believed it despite knowing what she actually did for a living… I just didn’t put 2 and 2 together because of my tiny child monkey brain.

I was just so humbled and impressed that my nan made this Power Rangers action figure set.”

“In the 1800’s, a man named Denis Vrain-Lucas forged tens of thousands of fake letters from historical figures.

He made hundreds of thousands of francs from prominent French collectors by selling documents supposedly written by Biblical figures such as Judas, Mary Magdalene, and Pontius Pilate, and got away with it for years.

This would all be pretty understandable–except that all the letters were written in modern French, on watermarked paper.”

“I was working for a midsized company.

One day we had a company meeting where the CEO gave a speech where someone asked if they were going to put in cubicles. The CEO swore that there would never be cubicles at a company he ran. We all believed him.

Three weeks later workers showed up and started assembling cubicles. Then we had meetings with our mangers where it was explained to us that they were not cubicles. They were ‘work stations’ and anyone who said the word cubicles would be fired.”

“For whatever reason, I went on for years thinking you just couldn’t turn the lights inside the car on.

One night, I was eighteen years old and went to drive home from work. I saw some cops on the side of the road and didn’t realize my overhead lights were on until I had already passed them.

I panicked and started wondering why they weren’t chasing me, but I guess that was the night where I figured it’s actually okay to have those lights on.”

“That gum took 7 years to digest if we accidentally swallowed it.

An older kid I knew also perpetuated this lie by telling me he had to get surgery to remove a big wad of gum that had accumulated in his stomach.

His mom backed him up.”

“When I was a kid there was a guy maybe about 10 years older than me in our church.

He worked at a grocery store and drove a Camaro. we thought he was the coolest guy in the world. He was telling us that Phil Jackson would go into the grocery store all of the time and they were friends. This is believable since Phil lives in the area and most people have encountered him at least one time.

Phil told Camaro guy that Shaq and Kobe were coming to the area to stay with him and they needed someone to come play with them to keep their skills sharp. Camaro guy said he wanted to go but couldn’t because he had to work his minimum wage job.

At the time us kids were extremely impressed with this. As I got older and wiser, I realized there was no way Shaq and Kobe needed a 5’7″ overweight grocery store clerk to keep them NBA ready.”

“That drinking pickle juice will dry your blood up.

My mom told me that (we’re from the South we believe a lot of stupid stuff). IDK where my mom got it.

When I pointed it out to my High School Home Ec teacher she just looked at me like I was a moron… and I was an honor student.

“My dad had weird rules to music.

For the longest time I believe that Spotify would make me lose my hearing because he told me that the app used a certain frequency that the army used to torment POWs.

Turned out he just didn’t like the fact I was listen to music he hadn’t pre approved.”

“When I was around 4, my older brother told me that since we were in a house with no chimney, we had to leave the door unlocked for Santa to get in on Christmas Eve.

We forgot and were robbed a month later.”

“”If South Vietnam falls, next week the whole world will be Commies”

“”Live life in the moment.”

High school and college loved to teach us that Carpe Diem stuff.

Like, no bud, reflect on the past, dream and plan for the future.”

“In high school a student asked why the American soldiers in WWII got the nickname dough boy.

I said because when they were in France they would visit the French women and love the French bread so much they kept coming back. This is also why we have the Pillsbury dough boy.

This explanation was quickly shot down by my teacher but for just a moment I had them.”

“A few thousand years ago, a group of lunatics in the desert decided that there was a Big Man in the Sky that wanted them to k**l any person who didn’t agree with them about the exact qualities of The Big Man in the Sky.

Over the years they came to also believe that The Big Man in the Sky would send you to burn for all eternity if you mast**bated, but was perfectly fine with slavery.

“My grandpa told me this story of those signs that warn for falling rocks on the road.

He said a Native American chief put them up in an attempt to find his estranged son named Falling Rock.

Every time I saw those signs I would look for him, only to be told years later that he made the whole thing up.

“In middle school, rumor was that I was a Russian spy.

Literally everyone believed it and ignored me for the next month, since they don’t want to leak information about themselves to Russia.”

In the comments, please tell us about the dumbest lie that you actually believed.