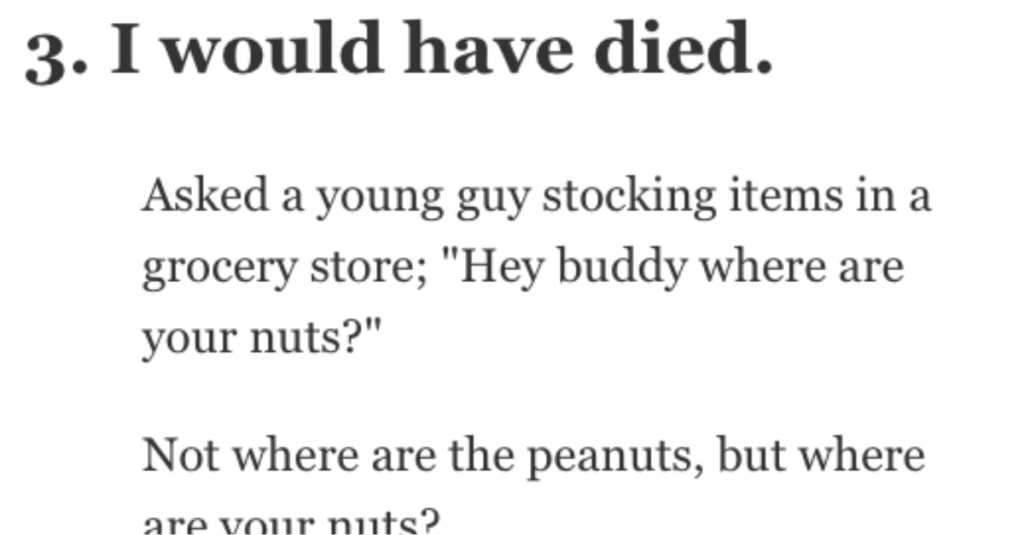 Grocery stores seem ripe for these kinds of interactions because every type of person has to visit them, we’re forced into social interaction, and kaboom – the awkward will follow.

These 16 people have some terribly funny stories that definitely prove the point.

16. Something you never forget.

Mom was occupied with the purchase and I wanted a toy from the claw machine, so I reached in there to grab a prize.

A struggle ensued, and it turns out that the machine is much better as grasping prey than I am. I was up to my shoulder in failure and couldn’t get my arm back, so the tears started flowing.

Within minutes, I was a pathetic puddle on the ground, surrounded by my mom, a couple store managers, and a couple of local firefighters who eventually rescued me.

Sounds embarrassing, but luckily I was only 4 so it would be almost 10 more years before I would start to develop a sense of shame.

I was in the early months of a new relationship, the ‘be prepared just in case’ stage where you keep a couple of overnight essentials to hand. I was doing a quick post-workshop at the supermarket.

At the checkout, I pulled my wallet out of my handbag with a flourish and launched a pair of red lace panties three feet into the air and down onto the cashiers’ lap…

14. The kindness of strangers.

It was my husband’s birthday, and we went to walmart to pick up a cake and ice cream. As we went to pay, our bank card was declined. It was so humiliating that I broke down crying.

A man who was in line behind us saw what was going on, and he paid for our groceries. I will never forget how kind that stranger was.

I was once shopping and acutely aware of an older man staring at me. I was getting a little nervous when he must have noticed my discomfort and came over to me. He apologized for staring and said he thought I was exceptionally beautiful. I, of course, wanted to jettison out of there asap as a 19 yo alone in a store.

That encounter gave me a confidence and self love I didn’t have before. His sincerity has stayed with me even after a decade has passed. I hope he knows what a gift his kindness was that day.

12. A parenting moment I hope never to experience.

So you know the lobster tanks that they have at the store? Well, five year old me was obsessed with them, and would always run over to watch them. So one day, I run over to them and wave, and one moved it’s claw.

I thought it was waving at me and thought I could control their movements. So I decide I want them to run around, so I start running in a circle.

I kept running, and I puked. Then I slipped in the puke and accidentally knocked down a box full of chips. They exploded everywhere. And I’m not allowed back into that store.

My husband and I were shopping at Wal-Mart with our 3 year old son. We passed another couple with their child who wore a Batman T-shirt.

So our son stood up in the cart, pulled down his pants to show everyone his underwear and yells, “Look, I have Batman too”!!

for some stupid reason i wanted to give a hug to my dad with my fucking eyes closed. I hugged a stranger.

9. Someone got what they deserve.

My most awkward moment in a grocery store was when a friend of mine and her young daughter (around 4 at the time) and I went to Walmart. Well it was around the Halloween season and I decided to take her daughter to look at the costumes.

So as we were in the aisle she picked up a pirate sword and started to swing it around. So I picked up a sword to and told her On Guard! and so we started dueling in the middle of the aisle. So as we were doing that her mom was laughing and then we got the death stares from a few of the shoppers and a woman in yoga pants came up and said “aren’t you too old to play with little kids?”

Without skipping a beat my friends kid said look she has jiggly legs like grandma. The Woman got beat red she stared at us until we left the area. But her face was priceless.

I was rushing to visit my in-laws with the kids. They live just a few minutes’ walk away and we popped into the shop on the way to get some treats for them. We were running late and I was so distracted with the kids that after finally getting past the checkout I realized in horror that I didn’t have my wallet.

I was so embarrassed, I apologized to the cashier for having scanned everything, to the kids for having to leave the biscuits behind, explained and tried to run for the hills. But the lady in front of me, (who was still there sorting out her bags) took over and insisted that she would pay for it, said the same had happened to her.

She literally wouldn’t be stopped. I fully felt the blessing of this act of kindness but I never felt so embarrassed in my life. The kindness actually made me feel a lot worse despite my better judgement, but of course I tried to hide it as best I could.

When I was at uni I used to get carded a lot when buying alcohol or cigarettes and was rather annoyed by it. One day as I was doing a larger shopping I started getting my items out of the cart, the lady at the till started ringing them up one by one and I was somewhere in another world in my head.

I bought one can of alcohol free beer but it was at the very end of the heap of stuff yet and the cashier was actually ringing up a a bunch of sardine cans when she looked at me and said she’d like to see and ID.

I looked at the can in her hand and I blurted out “We’re being carded even for FISH now?!” before realising she probably just looked ahead, spotted the beer and wanted to give me some time to forage through my purse until she gets to the item. She gave me a look that clearly said “one more of these idiots and I quit…”

It was Interesting that my daughter shared her school lesson with a stranger in the middle of the pasta aisle.

My young daughter ran up to a stranger with his 2 year old and In a very loud voice said “YOU are the Dad and have the penis”.

I just shook my head at the very embarrassed man and told him to have a nice day.

5. Our brains are funny places.

Accidentally bumped into an old lady and blurted out “Yeehaw, Oh i’m sorry ma’am” I practically yelled the Yeehaw. I don’t remember what what was on my mind.

4. This is double awkward.

I was a cashier at a grocery store as a very young adult. I was dirt poor, didn’t own a car and walked everywhere. My metabolism is such that, if I don’t eat regularly, my blood sugar can plummet and I pass out. Being poor, I hadn’t eaten much for a few days, add in the walk to work, and you’re looking at a recipe for disaster.

Yep. I passed out right there in my check stand. But that wasn’t even the awkward part. I hit the bridge of my nose on something when I fell and ended up with a nice little gash. After I’d recovered for a bit in the back, I resumed my shift.

A little while later I was ringing up for an older lady. She kept staring at me and I could tell by the look in her eye that she was upset. As I ring up the last of her groceries, she reaches out, touches my arm and says, ‘honey, between you and me, I’d leave the guy.’ I said ‘oh, no no! No one hit me. I swear! I just got lightheaded and passed out.’

She looked like she didn’t believe me, because that’s exactly the sort of thing a battered woman might say, and left with her groceries still shaking her head.

Asked a young guy stocking items in a grocery store; “Hey buddy where are your nuts?”

After seeing the wide eyed look on his face, I realized what I had asked. I got embarrassed and muttered; “Never mind I will find them myself”.

He literally said “Uh, no you won’t”. Yeah, I still blush today.

Not a grocery store but in a food court, I slipped on a chip that someone had dropped. No harm was done but boy, the panic of the center management was something to behold.

The pharmacist arrived first followed by the manager and a crowd of staff all terrified I would sue. It is still a family joke twenty years later.

I get rather mesmerized by all the options while shopping. I was an early 30’s male, walking slowly along the dairy wall with my focus zeroed-in on the vast variety of products before me. That is until I walked straight into a lady doing her shopping. This lady was late 50’s / early 60’s, a bigger lady, and had her back to me before I slammed into her.

The collision surprised me, and I instantly pulled back, realizing I was at fault here. In that reflex reaction of pulling back, my hand was somewhere around her hamstring when I bumped into her, and as I jerked my hand upward while she began to turn – my hand slid right up her butt crack…

She turned around and I blurted out “Oh my god, I’m so sorry”. She didn’t say a word. She just stared straight into my eyes, deep, with a giant smile. I apologized again and asked if she was alright – not a word in response – just that penetrating stare and joker smile. I apologized, again, and began to walk away.

She swiveled to keep the laser stare and scare smile on me, saying nothing. I left the store. A very intense 5 second interaction, and all I knew is that I didn’t want any more of it.

I don’t know about you, but I’m happy to continue doing the grocery store thing remotely for years to come.

If you’ve got an awkward grocery store moment to share, please do so in the comments!