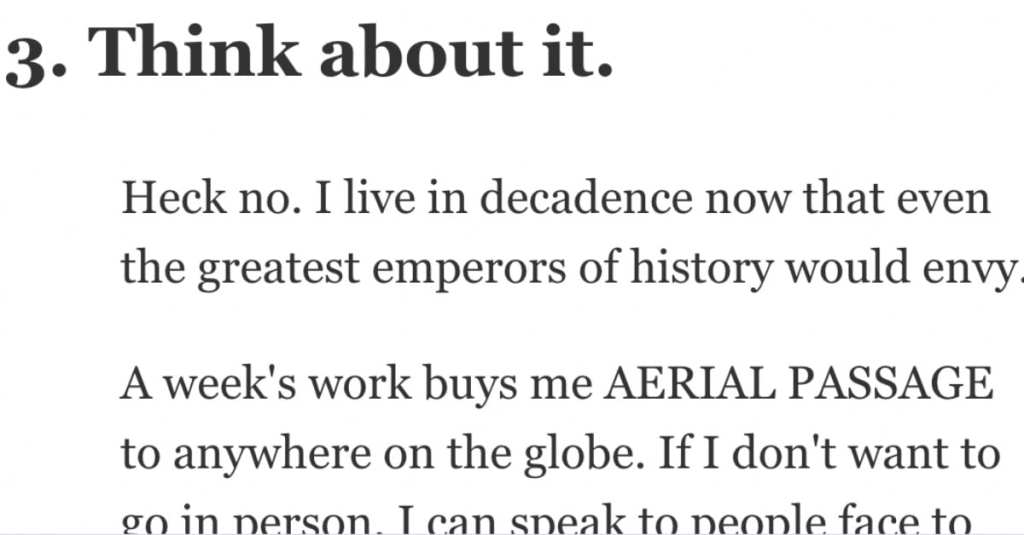 People love to ruminate and consider questions and answers that have to do with the possibilities linked to time travel. Where would you go, what would you want to see, what would you change if you could – but the facts of the matter are, we are so used to certain comforts and conveniences that honestly any time further than thirty years in the past would be a struggle, to say the least.

These 16 people are answering why – or why not – they would be willing to give up everything we’ve got today for a place in the past’s high society.

Should be interesting, right?

I’d be born 10 years earlier, so I could have been an adult in the 90s and bought a house for the price of a Big Mac.

Also, have the government pay me to go to university.

As someone who is currently on antibiotics for a UTI and eating yogurt to prevent a yeast infection as a result of said antibiotics, I am so f**king happy with modern medicine.

If I lived back in an earlier time period, I would likely be dead from a kidney infection since I get UTIs chronically. 😀

Not to mention the IUD preventing unwanted pregnancy, my pads and menstrual cup, IBUPROFEN FOR THE CRAMPS. Naw, you could not pay me to go back in time and live that stuff. My heart goes out to women of the past.

14. This person is a deep thinker, folks.

A better societal position does not mean a better position overall. So, no.

13. You could cheat the system.

Well… All of this is true. But the OP didn’t specify any bounds on how much earlier the society has to be. So I would gladly become a billionaire in the society of yesterday 🙂

But if we I stop cheating and respect the spirit of the question, Being a very rich American in the roaring 20s or the 60s doesn’t sound as bad as most of the other options.

You don’t get the internet or most modern media, but you can still travel, there are lots of ways to enjoy your leisure, your day to day life has most of the regular amenities we are used to and a personal chef can cook your pizza rolls.

And being a rich American you don’t have to go to war.

Not as bad, but as a woman, I have to second that

My parents were alive when it was still illegal for me to own a checking account without a husband and have any say in my health. My grandmas had like 3 job options

There’s a reason time travelers are white dudes in movies

11. The smell is a dealbreaker.

No. Even kings and princes back in the day had it rough. Having a crown on your head won’t make you immune to syphillis or the plague. And everything stank really bad. The past is just nasty.

When you watch period movies or tv shows they often gloss over that. That people would literally throw the contents of chamber pots out the windows into the street below

No. I’m a woman. I quite enjoy freedom and rights.

Higher status further back in history means royal baby maker or the like. So death by childbirth or some post birth infection. No thanks.

When Little Timmy won the crown
In sixteen-sixty-five –
He donned his royal golden gown,
And said: “I feel alive!

“There’s no one quite as strong as me!
There’s no one half as wise!
For I’m the noble king, you see!”
He said, and closed his eyes.

He wiped away a regal tear.
He shook his head with pride.

Alas, the plague was rife that year.

No. I have medical conditions that would see me dead or at least crippled within a year, probably less.

Exactly. I’m the King of England 5 of my children died in childhood, I live an a poo stinky, foul, smokey dark Castle and a plague that kills 10% of the already filthy population rolls through every few years.

But I have lots of servants to feed me the finest nutmeg coated, quasi rotten lamb in the world.

6. If we could change things…

I was just thinking that. If we’re allowed to change things, I’d be open to going way back to introduce some simple concept way earlier.

Think of how far medicine could advance if you could introduce germ theory a millennium early. I get that not just anybody could get that idea widely accepted but, I bet a Roman emperor could get it done.

I get that life wouldn’t be great by our standards in the early roman period but if I could make life better for humanity as a whole, I think it’d be worth it.

5. Be careful not to look forward.

I was thinking of the technical advancements we have today compared to e.g 18th century.

The possibility of walking into a store and literally buying anything you may need or ordering things online and have it shipped to your literal porch.

Future might not even require you to visit the grocery store, you could probably have a drone deliver it to your house at the click of a button or even print the things you need.

Seen financially, the future is looking darker with AI and robots growing bigger reducing the need of humans performing work.

4. Be thankful for what you have.

Probably not, even emperors had worse life conditions compared to the average joe today.

On another note: The past is often romanticized, the more you go into History, the more you realize how f**ked up it really was and get an idea of the sheer insanity that ruled during some ages (just think about witch-hunting for example).

We all should be glad to live now…

Heck no. I live in decadence now that even the greatest emperors of history would envy.

A week’s work buys me AERIAL PASSAGE to anywhere on the globe. If I don’t want to go in person, I can speak to people face to face on a handheld scrying stone from anywhere in my nation.

can go from holding an ice cube to eating a pizza roll in five minutes just by putting it in a magic heat box. We’re on some wizard level now.

As a woman, no, even in a higher social position I would have less rights & opportunities than I have today.

Now if I had no choice then I would but only if I could be a viking woman, because women’s rights were quite advanced in if you were a member of their society, though I’d still rather live in this age.

I like my air conditioning, indoor plumbing and video games.

I don’t know, y’all. Being fancy is nice, but I don’t think it’s as nice as vaccines and penicillin. Or an epidural.

Answer yourself down in the comments!