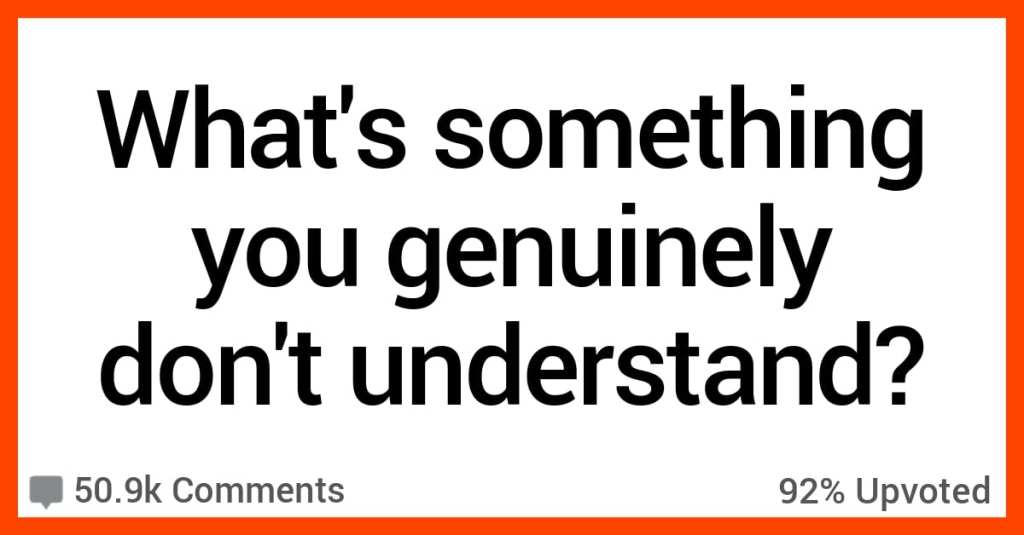 Before we dive into this list, let me just say that one of the greatest things about human beings is that we’re all different, and we all have strengths and weaknesses and each of those things has a part to play in society.

If you totally get math, but you can’t spell to save your life, or if you’re super excellent at understanding animals but can’t imagine raising a kid, etc, well – there’s a place for all of us!

So, what I’m saying is that we don’t have to know everything, but if there’s something you wished you understood, don’t be afraid to ask!

How people can be so hateful and for no reason. Like, I’m literally studying psychology and it’s at the point where I genuinely can’t explain why some people are just… nicer and more understanding of others. Everything I’ve learned has only made the answer harder, more complex, and ironically enough- more vague.

If you told me “Breaking news! Humanity is really split into two species and the deciding genetic factor is the ability to show empathy for people not like you!” I’d believe it in a heartbeat. Fighting is fundamentally stupid, intraspecies competition is universally harmful for every member of that species in the long-run when resources aren’t scarce- yet our species loves to create its own problems. Ridiculous.

How anyone could believe flat earth theory.

I think its the first one, that combined with a history of flawed experiments that confirm their views. I just recently watched a great video on how people could be believe this, and I can see why.

13. They must get something out of it.

People that aren’t interested in the views of X group of people, but then continually go onto ads, or pages to then harass those people

12. I honestly do not understand this either.

Honestly I can’t grasp this concept of throwing stuff out of the window of a car. Wherever you are going there will be a trashcan it can wait.

Looking at you smokers.

Just cruelty in itself can’t understand it, defenceless creatures.. makes me despair of humans.

10. There is no reason that makes sense.

Parasocial relationships. They feel like they’re their best friends because the politicians say they care so much about them when really it’s a persuasion tactic for their ideology.

9. You don’t have to understand it to play it.

I’ve played music for 20+ years and music theory just goes over my head.

I know my major/minor scales, I know my chord structures, but putting it all together escapes me.

I have people tell me my songs are “cool” or that they love how the “chord pattern works backwards to the root” and I’m just like “ya, I don’t know I just wrote it.”

I can wrap my head around adults being mean/cruel to other adults, I obviously don’t like it but I can grasp it.

But I can’t grasp how someone could abuse a person that they helped bring into the world….

Other times, it’s Love. Some people are desperate to be loved, and can become violent if they do not receive the total dependence and affection they dreamed of. They want their child to exist solely for them, and struggle a lot when they realise that children aren’t always affectionate. They lose control, hurt the child, and then get even less love, repeating the cycle.

It can also be about Expectations. Some parents try to live out their own unfulfilled dreams through their children. The pressure on the child ends up as a form of abuse in itself, alongside the violence or manipulation that comes with failure to meet the expectations. These parents especially do not respect their children as human beings, seeing them solely as a vessel to fulfil their wishes.

Another possibility is Indifference. These parents don’t really care. They are the neglectful type, who didn’t really want children, but had them anyway. Alternately, they had children and then found they didn’t want them or that they were too much work. The children are fed, clothed, and physically healthy, but the emotional abuse is severe. The parents don’t actively attack them, but children are definitely smart enough to know when they are not wanted, or that their parent doesn’t actually care. This can leave major scars on the heart, and is far more damaging than you may think.

There is also the Generational Cycle. By this, I mean the people who were abused growing up, never learnt any better, and repeated these mistakes with their children. ‘I was ___ and I turned out fine!’ is a common line they will use. They are not fine, but they don’t realise it because they never learnt any other way to be. If their children do not break it, then the cycle with continue.

This is not a comprehensive list at all, but these are some of the major factors that I have found when hearing various stories of abuse. If anyone has any suggestions to add, please let me know.

How someone doesn’t understand that they’re in everyone’s way. People who just stop in their tracks with absolutely zero consideration of other people who have their own destinations and/or business. What’s worse, when someone notices that someone else passes them and is all rude about it. “What, are ya in a hurry?” What if I am, motherfucker? You’re not in charge of setting everyone else’s pace.

I have a very fast regular walk, due to my impatience and long legs. I tend to get to where I’m going quickly. When human cattle are just moseying along, going with the flow of people (unless we’re in line to something, mind you) and have zero regard for anyone else, I get antsy. I need to move along, because the glacial pace of a herd of people does not cut it with me.

Worse is when people feel the need to block aisles in a store with their conversations, each having a cart, creating a huge jam while people line up behind them. Worse yet is when someone driving sees someone they know so they stop to talk to them. Fuck you, this isn’t chat time, say hi, honk your horn, and keep it moving. I don’t care that you’re retired and have literally all day to do what you’re doing. Some of us only have a couple precious days off, so we have to get our shit done in a short time span. It shouldn’t effect me in any way that you want to talk to your VFW buddy.

I don’t understand why adoption is so costly. If a child needs a home and someone is fit to raise them, why the added financial burden?

Private and international adoption can be costly, but we adopted our kids through an adoption agency that worked with our local county (and were funded by the county). We ended up getting a foster kid who was in the final stages of being cleared for adoption. We had to pay maybe $150 in total (I don’t even remember what those fees were for, background check?), make our house child-friendly, take something like 20 hours of classes, and take another 8 hours or so filling out a lot of paperwork.

We had the ability to select all kinds of criteria for what kind of child we wanted, but we said we’d take pretty much any kid who isn’t severely disabled, since we would be unable to handle that. We got a 1-year-old child, but I found out later that teenagers are the hardest to get adopted and end up aging out of the foster care system before they can be matched with a family.

It was worth it in the end, and the county ended up contacting us later, offering us the chance to adopt a biological sibling. We said yes. It’s been 10 years now and we have a couple of great kids. The process cost a lot of time, but little money.

The human tendency to accept baseless speculation over objective analysis.

Speculation is generally intuitive, because someone came up with it from intuition.

Objective (as can be) analysis can have very counter-intuitive outcomes, so people are reluctant to accept it.

4. It really is baffling.

Those realistic balls that some truck drivers have, it’s so unnecessary that Idk why anyone would put that on their vehicle.

I listened to a podcast about them once who interviewed people with them, the creators ect. and they more or less concluded that they where usually a gag gift, prank or used ironically.

Why do I exist?

Am I the only one here with an actual soul?

If another person with a soul reads this will they ask if I’m made to ask this question and then they never hear about me again?

Is it my destiny to ask this question?

Am I really the one without the soul?

Maths. All of it.

Makes me super anxious and then I get upset and give up.

I am mid 30s and I cannot deal with math whatsoever.

I hear or see numbers and my brain just automatically switches off and I panic.

I can count and that’s about the best I can say for my math.

How some people just don’t like to try new food.

I have about 6 things i don’t like to eat.

I just don’t get it.

I feel like we would all be a lot smarter if we let people explain things to us, don’t you?

What’s something you wish you understood better? Confess in the comments!