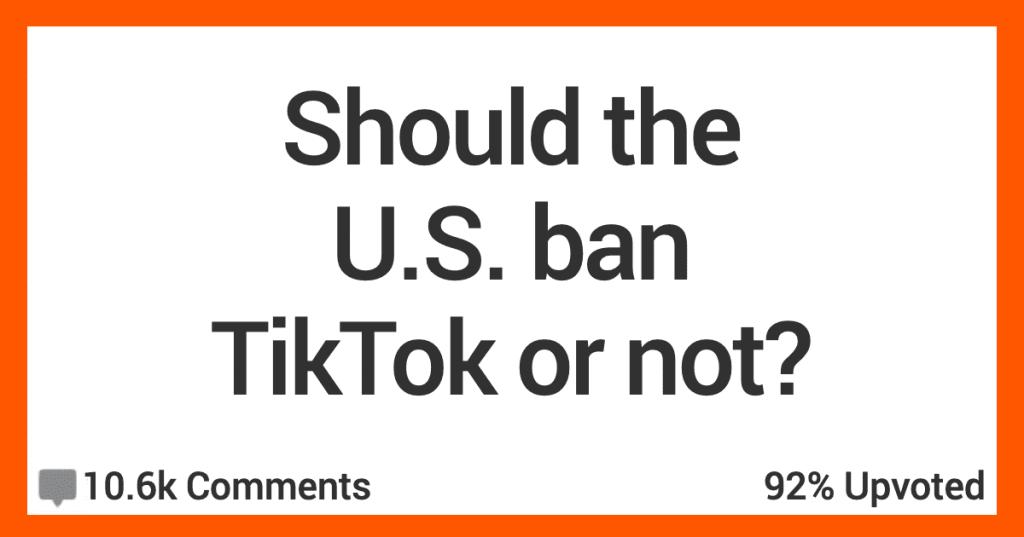 16 People Weigh In On Whether Or Not The U.S. Should Ban TikTok

The U.S. government had already banned the use of TikTok on government property, but could they go so far as to ban the app in the States altogether?

It seems hard to believe that kind of censorship could get real traction, but honestly, nothing feels as if it’s out of the realm of possibility these days.

These 16 people are weighing on whether or not they think it’s a good idea and why.

The concern isn’t that companies are storing people’s data. The concern is that when TikTok does it, it ends being accessible by the Chinese government.

15. We should secure our devices.

The type of information they are being accused of tracking should not be available to any app makers.

If the device allows that to be info to be passed to an app, in my opinion that’s a problem with the security of the device, not just something we should blame on the app.

Instead of banning TikTok, we should have some real privacy laws and put it on the manufacturers of the operating system to enforce them.

It’s almost a new kind of technological warfare. Do we want the Chinese government choosing what media is shared with American youths?

At the end of the day, at the top of every Chinese company is the CCP, a hostile foreign government.

If you get a person’s attention for multiple hours a day and control what they see, you can subtly change their world view. It’s so popular now that it’s too powerful for China to not use sooner or later, if not already.

Any country with that kind of power over an enemy would use it. They already use our social media to f**k with us at the user level, there’s no way they aren’t using their own as the man behind the curtain.

As a former teacher, I worry about how it’s impacting kids. Many of them watch it for hours daily, and there’s been tons of issues with them following idiotic TikTok trends.

It also is used by a lot of minors, so security issues are concerning. I don’t think the first reason is enough to ban it, but the second might be.

Yeah. Saw a YouTube video where this guy accused YouTube of having a secret pedophile “portal”. All you had to do was search up “sexy pre-teens” or something and you’d get videos of young little girls in bikinis or at pageants, etc. then he’d go “looook!!’ Look at my recommended list!!!”

Yeah dude. It’s showing more of the same. That’s sort of how the algorithm works. If I look up funny dog farts, it will do the same.

High school me used to spend hours a day on Reddit. I remember when Reddit went down, I genuinely could not figure out how to spend my time.

Sounds like they’re trying to get rid of the symptom of privacy concerns and not the problem which is how no tech company or corporation respects individual privacy.

Yeah but imo, tiktok is worse because it’s not even close to anonymous. My brother went viral and didn’t listen to me when I said to not use his real name in any capacity.

Even just the first, despite it being fairly common. Honestly it’s bad enough that his full face was visible. But unfortunately, he had his first and middle name and the video he went viral from was in a fairly recognizable area.

Luckily not too much came of it, but he did end up getting harassed by both “fans” and a$$holes alike. I don’t think he ever went back to the account after that. This isn’t exclusive to tiktok and honestly, tiktok is nothing compared to how insidious Facebook is and how it’s changed the landscape of the internet and privacy forever, but I do think tiktok is a lot more dangerous right now.

Most young people have migrated from Facebook to Instagram or tiktok or Twitter. Sometimes all 3. But tiktok specifically gets used way more by the younger end of the spectrum and it’s super easy to prey on young folks who give out all their information for likes or views or whatever and it’s encouraged by the platform itself.

You kinda can’t have a tiktok without having a face in it. You can maybe get away with not having a real name attached, but even just real images of a face can be enough to find someone. When I was a kid, you were told to lie about everything on the internet. Don’t even tell them what country you’re from if you can avoid it. Definitely no names or ages or states.

Sure, you can still give out your information on reddit but it’s fairly anonymous for the most part. It’s pretty hard to verify someone’s identity just by post history, and that’s assuming they’re being truthful.

I’m not perfect about internet privacy, but I’m also not a kid. I’m much less likely to be preyed upon and much more likely to recognize manipulation when I see it.

I think tiktok has its uses and benefits, but I do think it’s a much more insidious progression of what Facebook started, especially since Facebook started by targeting college kids. Not that I think that’s a ton better, but at least college kids are adults. Idk that’s my 2 cents on the matter anyways.

Try buying a television that doesn’t have “smart” features and an EULA. They cost way more than the televisions with the computers crammed in them. And no, it’s not economy of scale making them so much cheaper.

Our viewing habits are tracked and sold. We are the product.

Well said; TikTok does really have an issue with younger people giving out their information. What puzzles me is that they do not get told to lie about everything on the Internet. Or do they? Certainly seems like they do not. I hope that they get told that though. It’s important.

I don’t have children myself or have a job where I interact with children (such as teacher), but I would definitely mention that, it’s more important right now than it has ever been before with the Internet growing into something so big as it is now.

I used to care but there’s not much I at least know what to do about it and am currently resigned to the fact that pretty much every service is ripping as much data as they can whether it be private, corporate, or government

4. The user determines the experience.

Yeah it definitely is less about the platform and more about the user. I’m not gonna deny that harmful things make it higher up than harmless things, but if you’re just in tiktok for, say, sewing shortcuts you might have a pretty similar experience as you do being on reddit for sewing communities.

Edit: I’m not pro-tiktok I’m just not willing to blanket criticize for this specific reason.

Its state-sponsored status is also kind of a big deal. I already don’t like that we’re willing to give away our data to private ad companies and PACs, I really don’t like cutting out the middlemen to let a state actor push their intended video algorithms on us while mining our data.

At least on Reddit there often is an article for you to read if you so choose. I rarely go to the comments before clicking the link, at least skimming the actual post. I understand that I’m probably in the minority, but at least I have the option on this platform.

Tried TikTok for less than an hour before deleting my account and uninstalling the app, because there was no source behind any claim at all, notwithstanding that most of the videos were idiotic bullshit making no claim to begin with having no informative value.

Point is, not really fair to compare the platforms, but understandable

Established American companies are at least subject to American law. Google has to show how it uses and sells our data in some ways but not in others.

Like Google could not get away with selling your name, location, and transcript of txts made on your Android.

There’s certainly a lot to think about, but I still think people need to make their own choices.

What’s your take? Drop it in the comments!