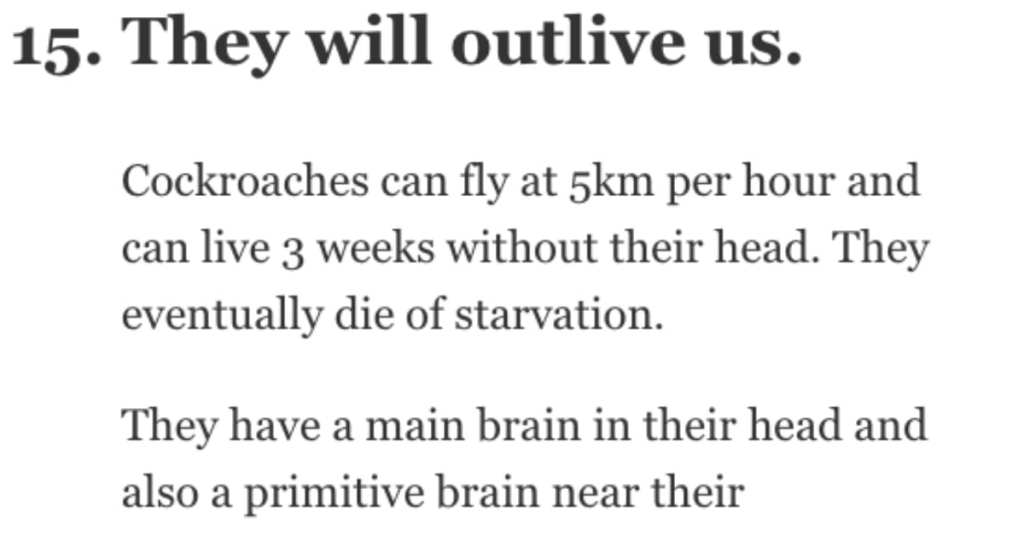 In general, people like learning new things, and knowing new things. It’s good for our brains to always be expanding and processing new knowledge; after all, we have all of our lives to learn as much as we can.

Some facts, though, are better off left in the dark, if you ask me – and these 16 people definitely agree.

If you want to know the things they wish they didn’t, gird your loins and read on.

16. This has always scared me.

Partner passed of one earlier this year. We were talking in bed, I went to use the bath, she went to make coffee. Heard a crash.

Cockroaches can fly at 5km per hour and can live 3 weeks without their head. They eventually die of starvation.

They have a main brain in their head and also a primitive brain near their abdomen. Cockroaches also pre-date grass.

The last one is not that scary but kinda scary knowing they’ve been here so long so getting them out will be harder and they will probably outlive humans.

There was an experiment once where, every hour, a rat had to choose between getting fed or having the pleasure nerve of its brain stimulated.

And the rat being tested starved every time.

That my dad likely has terminal brain cancer.

I was setting up his MyChart for him and stumbled upon the information.

12. Go straight to the doctor.

The way rabies kills, once you have symptoms, you’re already dead.

I don’t really regret knowing this, but it’s a depressing fact nonetheless.

From my first job at KFC …….you cant really tell the chicken is spoiled once you put it in the fryer.

The strange pistachio you get every few nuts, the one that tastes a bit funny is because a navel orange worm died inside of it. Sorry.

7. This is actually quite sad.

Every time you think of a fond memory, you rewrite that memory in your brain.

And with time it will slowly deviate more and more from what you originally remembered, without you ever knowing it.

6. Because it definitely happens.

My parents are swingers, and now well Into their 70’s…

4. Because they’re not human? What the heck.

Doctors performed surgeries on infants without anesthesia until the ’80s, they thought the babies couldn’t feel pain.

3. Maybe more than one drink.

Every year thousands of children write to Santa Clause.

One of the most requested things children ask for on their Christmas lists is a dad.

This hurts. I’m going to get a drink.

When David Foster Wallace hanged himself on his back porch, he tied his hands together with duct tape so that even if he changed his mind at the last minute, he wouldn’t be able to escape.

He had been struggling with severe mental health issues for more than a decade, so it was sad but not surprising when he finally succeeded in committing su*cide.

I just wish I didn’t know that detail about the duct tape.

1. That must have been hell for pirates.

Because your body uses vitamin c to make collagen, which holds your skin together and makes scar tissue, when you get scurvy your old wounds reopen.

Why do we do things to ourselves like read these threads? Ugh!

Since we’re already on this path, add your own terrible facts down in the comments.