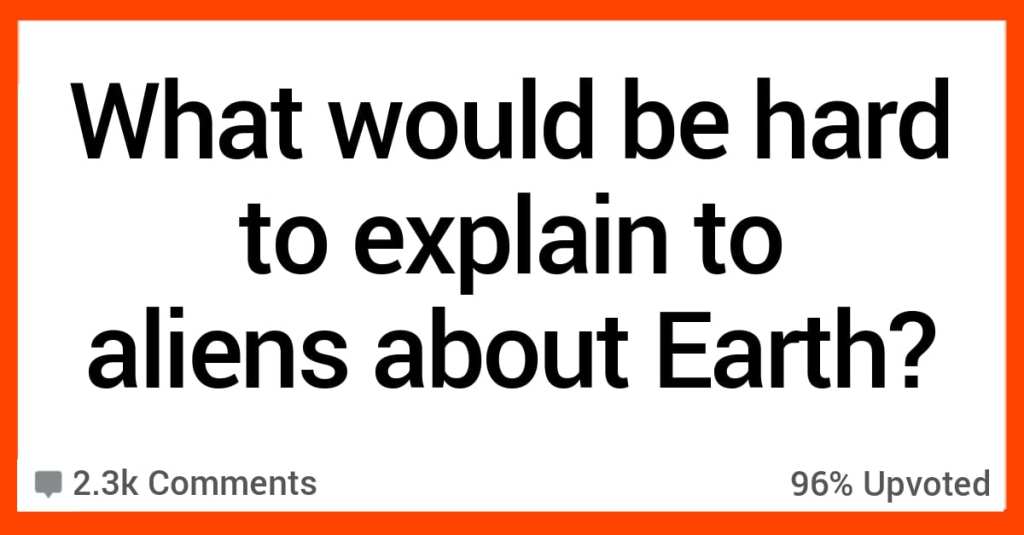 16 Things That Would Be Tough to Explain to Aliens

Every planet (I imagine) has its quirks, and every species surely has a weird thing or two about them that would be difficult to explain to outsiders.

Today, though, we’re thinking about all of the strange and wonderful things about Earth…and how difficult some of them would be to explain to an invading alien race.

I remember a story I heard years ago.

Aliens come to Earth, contact humans, and set about learning about us as well as providing us with all sorts of wonderful new technology, including medical advancements, communications methods, and space travel.

The alien responds. “How interesting. We have a similar philosophy.”

A: why are you putting that food in that box?

H: oh you see, I want the molecules in my food to vibrate at the right frequency, and this microwave helps do that.

A: wait human you forgot to put that in the microwave.

H: oh, uh, no this is ice cream, it’s already vibrating at the right frequency.

H: yeah and if it warms up too much I put it back in the cold box.

A: visible confusion seeing two humans eating pizza, one heating it up the other eating it cold

14. I seriously doubt they will care.

How these humans are different than those humans.

12. If they’re not your problems, they must not be real problems.

How people cannot give an inch of a fuck to the problems that everybody is having.

11. While it’s also probably killing us.

That we carry around a device with basically all the knowledge in the world, and use it to kill time.

Why they shouldn’t destroy earth

9. It really doesn’t make sense, does it.

7. There’s always that one deep thinker.

People are just going to say things they have a hard time explaining, or something they personally believe is irrational about humans, and assume it would also be hard to explain to aliens. People like to assume aliens are hyper-rational super beings that have transcended all of our mistakes and attained enlightenment.

And assuming they share any kind of human moral system is a mistake. For all we know trying to explain why we don’t systematically kill everyone that commits any crime or deviation whatsoever would be incomprehensible to them. They might not have some Utopian Star Trek morality system. They could just as easily be space Nazis that cherish their eugenics programs and zero tolerance form of totalitarian government.

6. You’d have trouble explaining that to me.

5. Bad news about your probes.

4. Or maybe you just need to find the right people.

3. Also they don’t believe in evidence.

“So some of our species believe the world is flat”

“Ah, you haven’t been to space to prove it!? Here! Here’s your evidence!”

“Oh we’ve been. We have the evidence. They just think it’s a conspiracy between government and NASA.”

“But we aren’t of earth. Our evidence is independent.”

“No, you’re now part of the conspiracy.”

2. An ambassador for Earth, to be sure.

1. Truly the best of our species.

I guess we’ve still got some time to consider (we hope).

What would you add to the list? Tell us your deepest alien thoughts in the comments!