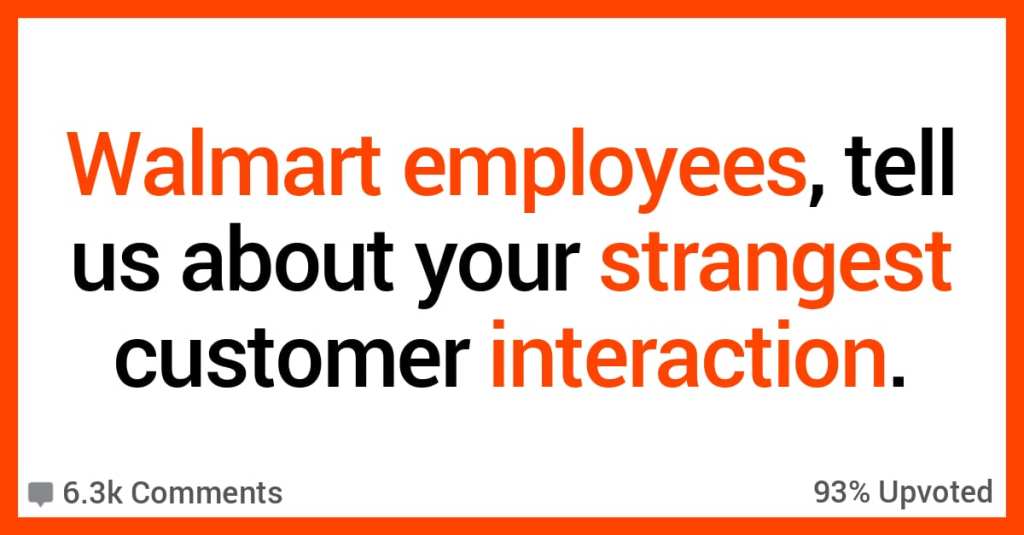 We all recognize, of course, that dealing with weird customers at Walmart is probably something of a sliding scale, right? Like, the people who work there probably deal with strangeness all the dang time, and so in order to stick out, things have to get really strange.

I had a guy come through my line wanting to buy a Flowbee (that 90s vacuum haircut thing).

He wanted to barter with me for it. I try telling that corporate sets the prices, but he seemed to think I was personally profiting from it. He was extremely irate.

He finally says “Fine! I’m not going to buy it then!”

I got a lot of people like that, that think I control the prices or care if they buy something or not.

An older guy, pretty dirty and homeless looking, came up and asked me to wring him up through the electronics register, he was leaning over like he had something in his jacket and his hand was inside. I thought nothing much of it, kind of expected to laugh later and say it looked like I was about to be robbed. Nope.

As I scan his groceries he looks into me eyes and says with the creepiest face and smile “Do you want to see my treasure?”. I just stared at him. What was it? A gun? His meat and potatoes? Imagine my terror as he slowly opens his jacket to reveal what appeared to be a newborn puppy, very newborn and slimy, and very much not moving.

I told my boss I had to go to break after that one.

I worked as a merchandiser and would spend at least 75% of my work hours in Wal-Mart.

During finals week, I would go in and stock shelves during the night shift. There was a night crew worker who would change his name tag daily. One night it was Owl. Next shift Night owl. Next shift Owl Night. Then Owl Knight. Then Knight Owl.

This one employee had over 20 different name tags.

The guy that brought back a wooden toilet seat bc it was cracked. He had the receipt which showed it was purchased 7 years ago. We refunded his money.

Several people have asked where this happened. It was in Missouri in the early 90’s. Back then, we refunded everyone.

12. You still shouldn’t feed it Cheetos.

Not an employee, but I was shopping in there one night and this lady was pushing a shopping cart with a baby car seat thing in it. She had a bag of Cheetos opened and was eating them, pushing the cart.

I saw her out of the corner of my eye grab the Cheetos, reach down and give one to the baby. I was thinking WTF when she reached in and got another, and then this tiny black hairy arm comes out.

She had a freaking baby monkey dressed in baby clothes in her shopping cart with a veil covering it up so you couldn’t tell, just casually feeding it Cheetos while doing some midnight shopping I guess…

11. He likes to survey his kingdom.

We have a pretty heavy guy come in every few days(despite being banned several times). He rarely purchases anything, just rides his Scootypuff jr. around and makes sexual comments to the women in the store.

When confronted, he will explain how he is a secret operative in the CIA, or how he is actually part owner of Walmart. My favorite line of his was that he was the “Prince of Oklahoma.”

There was a lady that came in very regularly and demanded everything be double or even triple bagged, and would have a very loud meltdown when a cashier didn’t know this was her preference.

Also an older woman who had shit fall out of her pants as she walked past my checkout lane.

9. I suppose there are worse things.

Okay, I worked for Wal-Mart for 5 years. In that time I met lots of strange, funny, interesting people. The one that stands out to me the most is a guy that I affectionately nicknamed “Fresh Breath Bob.”

He would come in and steal/buy as much mouthwash as he could carry to the end of the parking lot and proceed to drink it all. He would get hammered and belligerent but his breath was… just.. so fresh.

Had a women come in wanting to print photos, but she was convinced that our machines weren’t safe and that she would be hacked again.

In all my idiot glory i asked was she hacked before and that released the almighty conspiracy rant about how this indian man was hacking her and posting her stuff online.

She also claimed to have photos of this man and his wife. She printed off those photos as “proof” for the police. The photos where stock images from google Its amazing what mental illness can do

During my one summer working at Walmart, I was approached by a man in his mid-50s who asked where he could find “tiramisu containers.” I never heard of such a specific item, so I asked if he wanted Tupperware and walked with him to the aisle where they could be found.

Along the way, he proceeded to say the most stereotypical Italian phrases: “Bene!'” “Bravo!,” “Mamma Mia!,” etc. When we arrived, he thanked me and the other associate (a college-aged girl) who tagged along and gave me his card; it was plain white with ONLY his name and address. We were invited to his house for, “music, tiramisu, and ROMANCE!” (we didn’t go). He then bought (I kid you not) at least 30 Tupperware containers.

A month later, while stocking, a strange Italian accent behind me told me to, “Stick my hands up!” This same guy returned and wanted to know where he could find “tiramisu containers.” I asked if he wanted Tupperware and he proceeded to buy 30 more. I still wonder why.

Partially sighted blind man who could make out shapes, but not see well enough to shop on his own. Had to be assisted, always by a male. This was because he would make very inappropriate comments about all women.

He had a fat girl fetish, and would ask you to tell him how certain people looked. He’d been banned from every other grocery store in town. Eventually he was banned from ours as well.

I was department manager of general merchandise at a neighborhood market a couple years ago. Had this old lady come in and she was furious that we were no longer carrying a specific flavor of cat food.

She talked to the CSM and demanded that we order some for her. CSM told me which one she wanted so I got on my Walmart app and managed to find a UPC. It was not logged but I could still order it, so I found her and asked how many she would like me to order.

She replied “You can’t help me, you’re not in charge of pets” and I told her “actually I am over the pet dept, and I’d be happy to place a special order for you” she told me “don’t argue with me! the customer is always right” and stormed off back into the store to look at more cat food.

I worked at Wal-Mart in the late 90’s for a year in the Electronics department. We had a guy come in every week and buy something from our department. He would hold an employee hostage for at least a hour for whatever item he wanted to buy. Every insignificant detail had to be questioned and debated no matter the product (portable cassette player, universal remote, etc.).

The very next day he would always bring it back complaining it didn’t work how he was told. And not just complaining, he would go livid about it and threaten to sue if he didn’t get his way.

Turns out, this was some elaborate ruse to get a chance to hit on the woman who worked the customer service desk – let’s call her Rachel- and he was married. The days she wasn’t working is when he would actually come to the department and brow beat us like we had done something wrong.

He eventually stopped when Rachel quit.

I just had a fat lady in a mart cart try stealing a ham by putting it between her legs this thanksgiving.

We caught her but we didn’t want the ham back.

Had a guy offer me 400 bucks to hold his dick while he takes a piss. (No, I didn’t do it. Sounded like a scam)

Had some stoner come in and try to walk across my floor that was covered in stripper for some bacon at 3am. Had his baby in his arms. He busted his ass hard, but he caught the baby. I guess dad reflexes are still decent when stoned.

So much shit on the walls in the women’s bathrooms. So much shit. Women be painting Picasso in there.

Some weird old guy used to come swoon over the female employees at night in a scooter. He bought some car speakers and spent the entire night installing them in the parking lot.

1. None of these surprise me.

I worked at Walmart for about three months.

In that time, there was a man with no pants, someone sleeping in a shopping cart, and some very mean Amish people.

I’m a little bit gobsmacked, though I don’t know what I expected.

If you’re a Walmart employee, please share a bit of your own madness in the comments!