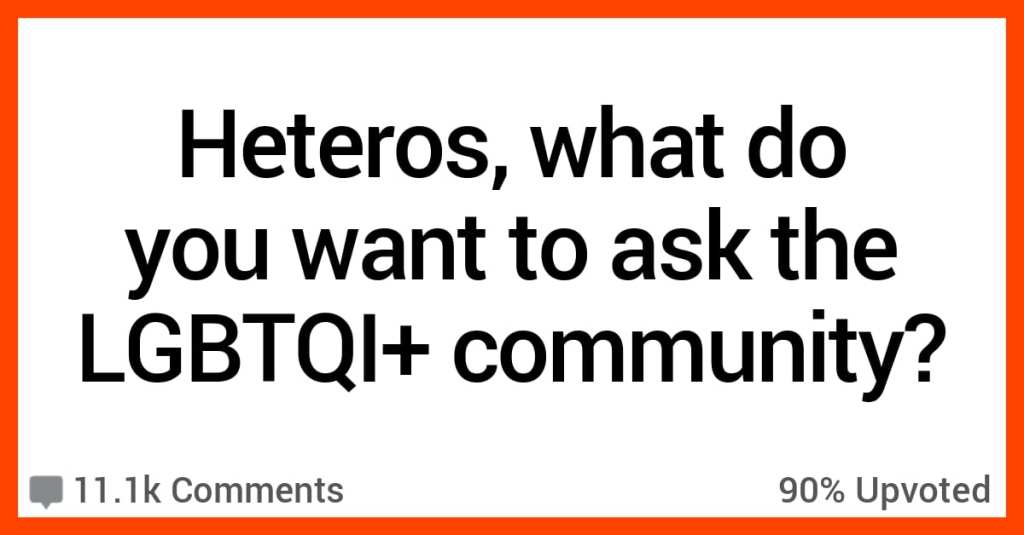 17 Heteros Jump at the Chance to Ask ?s About the LGBTQI+ Community

We know that one of the most important things to do when we’re trying to be empathetic or understanding about a community that isn’t our own is to do our best to walk in their shoes. That said, generally we don’t want to spend time bothering minorities with questions that we could easily Google or figure out on our own.

When there’s an open forum, though, everything is fair game – so see what these 17 straight folks asked the LGBTQ+ community when they had the chance.

17. How to best handle a new brother after he came out as trans?

Just ask him what he would prefer. He’s still your sibling, and I’m sensing you guys have a positive relationship, so it’s okay to outright ask him how he would prefer you to talk to him. It may be as simple as just changing pronouns, without trying to “bro it up” just for his sake.

Communication is key. Make sure you guys are on the same page and you’ll be fine. If he were a coworker or friend or acquaintance, I would steer away from outright asking, but for close friends and family, sometimes it’s best to just be honest, open, and vulnerable with the people you trust.

Find out what he is looking for or feels comfortable with, and go from there.

16. It’s a nice generic term that works for everyone.

I am a healthcare provider and when going through your social history if you are married or in a long term relationship and you tell me you have a “partner” is that for my comfort or do you really prefer referring to them as your partner?

Treat him like you would if he had a gf. If he is having relationship problems talk to him about it and offer support. See if he wants to join any local lgbt+ groups (post covid obvs).

I want to add on to this, to note that dad is going to still want to talk about safer sex practices, even though pregnancy isn’t a likely outcome. It’s still important.

14. What support did you need when you came out?

When I (m) came out as bi to my college girlfriend, I made sure to tell her that I was happy in our relationship, didn’t want to experiment while I was in a relationship with her, and that I just wanted her to know everything about me.

She cried for a week. So, don’t do that.

Spoiler alert: she came out as a lesbian five years later and is now married to a woman.

13. If a bi person ends up with a straight person is that look down upon in the community?

To your main point, bi people in straight relationships can be looked down on by the community, yeah.

It’s fairly common, unfortunately, and comes from a place of ignorance, since someone being in a heterosexual relationship doesn’t make the person any less bi.

It’s kind of the whole idea that they like both.

12. Is there ever a big queer cookout called the LGBBQ?

LG setting up a corporate cookout for their employees called LGBBQ at the end of a good Quarter getting confused at all the random people at their cookout.

11. As a straight person, am I allowed to use the “Q” word? I grew up in the 80s and it was considered a slur, as bad as the F word, and for that reason I feel weird using it.

I’m queer and I would personally say it’s fine is that person refers to themselves as queer.

I know some older LGBTQ+ people don’t like being referred to as queer because they grew up with it as a slur, so I would just use that word if that’s how they refer themselves.

10. Seriously, what is the Q for? I’m not being sarcastic or trolling, I don’t get the distinction.

Queer is just an umbrella term.

Kind of like how “pasta” is an umbrella term for certain foods.

Back in the 80s and 90s, the Q did stand for Questioning. As with everything, the community continues to grow and embrace resulting in new interpretations and broader definitions.

9. How would you feel about straight friends going with you to something like pride?

Hells yeah you can join at pride. Pride is a place for lgbt+ people and allies alike. So long as you are being nice and respectful of everyone it’s all cool.

Sadly, a lot of pride celebrations have become more of a party for straight people than a celebration of queer identity.

People get f*cked up and cause trouble, or make fun of outlandish outfits, etc.

It’s just an easier way of saying etc. so that other parts aren’t left out of the community, but you don’t have to say every single letter.

7. How do you feel now that commercials and media are more representative of more races, genders, orientations, etc? Do you notice it? Does it make you feel good, bad, indifferent?

Sometimes it’s really good but depending on what the media is it can feel really fake and like they’re capitalizing off of it.

I think it’s cool, being able to see people like myself just existing in modern day, without having it be some big deal.

6. Do some bisexuals who want to have kids tend to favor relationships with the opposite sex because it makes it just so much easier?

I am a bisexual man and would like to have kids someday.

I’ve seriously dated both men and women, but I just happened to find “my person” in my 9o who is a gay man.

I guess I’d rather spend my life with him and adopt children than get hung up on needing biological children with a woman.

Passing down my crooked teeth gene and a family history of depression probably wouldn’t do my kids service, anyway!

5. One of my best friends and old roommate (I got a job somewhere else) is gay and told me he didn’t like a lot of toxicity some people bring the the LGBTQ+ community. Is this something anyone else has experienced?

It exists especially, sadly, where gay communities are better established. For example I’ve been accused of lying to get “into” an lgbtq friendly apartment in Toronto. I’m bi but was dating a dude at the time.

When I went for my roommate interview I was accused of lying to get the apartment. Though I’m bi, and it was advertised as an lgbtq “friendly” apartment. In my mind, that’s the same as 4/20 friendly in that I thought it meant “were cool with it,” not like you HAD to be gay (nevermind, gay ENOUGH for their standards) to live there.

Being gay in Canadian cities is pretty safe but it’s very lonely and cookie cutter. By the time I was 22 or 23 (I’m 30 now) I flat out gave up on trying to find a welcoming community.

My sexuality isn’t something I live and breathe constantly, and it was exhausting to be told you’re not gay enough when the rest of the world is disgusted you’re not straight enough.

4. What is the correct way to respond to someone who comes out to you?

I’ve always responded with “Thank you for trusting me enough to share that with me,” and it seems to be well received.

It acknowledges that it’s a big deal to say it out loud and that they’re vulnerable in that moment.

3. What are some things you SHOULD and SHOULD NOT say to a transitioning person to comfort them?

-Use their preferred name and pronouns

-Tell then that if they want to try out a name you could try and call them that so they see if they like it or not.

-If you have a way to validate them try it out (e.g. If you’re a girl with a trans girl friend you could offer her help choosing clothes, giving tips about shaving, etc. If you’re a dude and have a trans man friend invite them to some “dude activities” like hanging with the boys, working out together, etc) TIP: DON’T force them to do it, even if they’re trans they might not be yet confortable enough, or maybe they don’t want to be the stereotype of their preferred gender, maybe a trans girl still wants to dress butch or a trans man might still rock a dress or makeup.

-Treat them as you already did, we don’t want to be treated like we carry the plague or something, we’re still your friend and nothing should change besides the pronouns and name you use to refer to ourselves.

-Out them to someone without asking first (this can be subtle, for example talking about how “when they were still a he/she” or profusely apologizing when getting the pronouns wrong) it’s sometimes dangerous and invalidating!

-Deadname/Misgender them when you’re mad at them, yeah it might be tempting to hurt someone when you’re mad, however for some of us the mental pain goes beyond a regular insult; imagine someone making fun about a very personal issue you confided to someone you though you could trust, we’ll be left thinking you don’t really support us and that you’re just “acting up”

-Never end any compliment with “for a trans person” you’re so pretty for a trans girl, you have such a great beard for a trans man, etc For you it might sound nice, however it can be felt like you’re invalidating us or make us insecure. Yes we are proud of our identity however we just want to live a regular life as our preferred gender, so there’s no need to constantly remind us!

Of course there are lots more, however as others have said, each trans folk is different so just ask them!

2. I’d like to ask the other LGBTQ+ people when they received their copy of the gay agenda and when I can expect to receive mine.

If you came out between July 2019 and now, it was delayed due to COVID.

You typically get your copy in the first Pride after you come out, but the planning meeting for last year got cancelled because of the pandemic, so there isn’t an agenda for this year

1. As a teacher, how can I be better? Is there anything I should avoid that might not be so obvious?

If a student comes out to you ask trans/nb, show them acceptance (use their name, pronouns, etc) and if you see them being harassed for being lgbt+ stand up for them.

If you’re not straight, what would you share with straight people? Tell us in the comments.