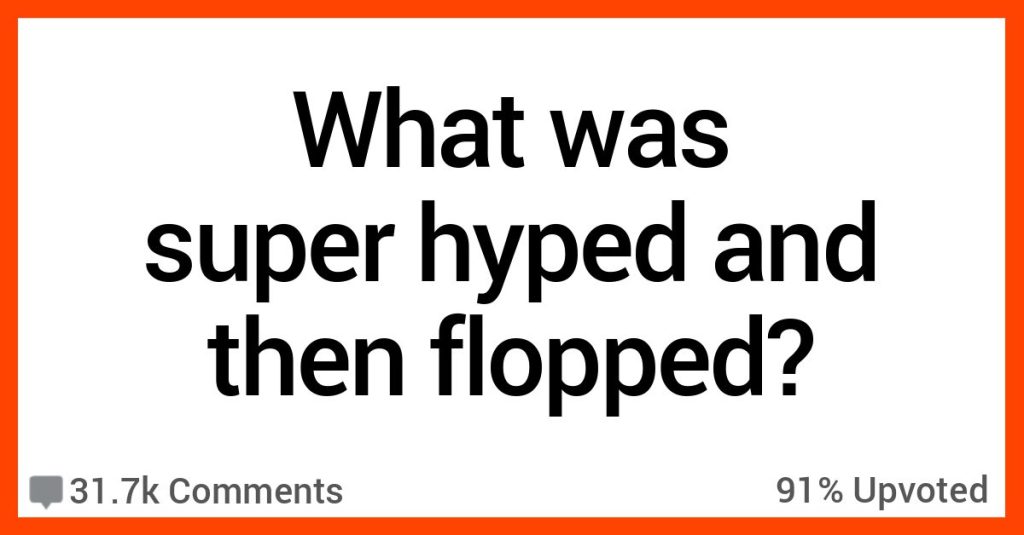 17 Hyped Products That Turned Out To Be Huge, Embarrassing Failures

When an advertising and marketing machine really gets behind a new property or product, it does its job well – we all get hyped up, we look forward to its release, and sometimes we even stand in line in the middle of the night.

Even though we’ve been burned on more than one occasion, as this list will prove – because it contains 17 things we all thought were going to be the new “IT,” only to find out shortly afterward that no one even liked it.

17. I totally forgot about these until right now.

But I loved the GameCube!

In the life of Chris Gaines

The project where Garth Brooks created a grunge icon that would premiere in a movie.

Dan vs. Dave. 1992 Olympics in Barcelona. They were everywhere! Such a big marketing campaign.

Hard to explain what a big deal that was to most jr high boys at the time. Reebok literally had a super bowl commercial about the big rivalry.

My cousin texted my the day that we were all supposed to die. She said “is anything happening?” And I was like “what do you mean?

No. Nothing is happening” she really said “oh, well you live in a time zone ahead of us by 2 hours. I thought stuff would happen over there on the east coast first.”

I f**king died. The thought of the world imploding on itself but still following time zones is fantastic.

The Segway. Remember when it was going to, and this is a quote, “change the way we design cities?”

12. We suddenly all had more time on our hands.

Quibi. That streaming service with nothing over 10 minutes. Launched about 3 weeks after the world shutdown.

Did anyone other than the company hype up Quibi?

That thing had disaster written all over it the moment it was announced and everyone seemed in agreement about that.

11. Nothing about that went right.

The war on drugs.

I would like to congratulate drugs for winning the war on drugs.

This decade being the roaring 20s!

Maybe this one will be opposite and end great?

9. We all have that memory.

That one pizza party specifically in 5th grade.

I was picked for a special pizza party lunch at the local pizza joint with about forty other students across my elementary school for exhibiting the monthly virtue, I think it was creativity that month, and we were each allowed two pieces. That sounds appropriate, or maybe even generous for kids aged 8-11, but the local pizza joint cuts its pizzas into strips- which is apparently called “Quad city-style” -which led to a couple people getting two long pieces from the middle, and some people getting two small slices that were mostly crust from the sides because the teachers handed the slices to us just working through the slices in a row.

So it was basically just a regular school lunchtime except it was at the pizza place.

8. Flop is putting it mildly.

I don’t think Flop is even the right word. It sss straight a scam.

7. The truth is still out there.

I was actually looking forward to it. Then I never heard anything about about so it just dropped from my memory

He was a commentator for the Baylor-kansas game yesterday. First I ever heard him speak outside random montages of crazy over the years. He is actually a pretty good commentator (for an ESPN+ only game streamed by dozens of people)

There was one point where they were talking about the OU QB and apparently he’s been struggling this year. Leaf goes “sometimes you get all this hype, Mel Kipper had him as the top pick on his board, so everyone goes crazy. Kipper can be wrong, he had me as his top pick!”

I laughed so hard

The final season of Game of Thrones.

My wife and I were very late to the GOT party. We watched the whole series for the first time during the Covid lock down. We watched it knowing the last season was a huge disappointment to fans, but thought “how bad could it really be? Everyone still recommends watching it.”

Even knowing it was a let down, we were still let down. Way worse than I thought a show of that caliber could be.

Yeah, turns out being an adult just means googling how to do stuff instead of asking your parents

Not a total flop per se, but Drake Bell’s music career.

Both Nickelodeon and Universal tried to make him into a pop star but it never quite happened. He’s still only known for Drake & Josh (and some.. uh.. unfortunate other things).

Edit: I’m aware his music was successful in Mexico.

“Cats” the movie. Based on one of the longest-running Broadway shows, with a star-studded cast, it should have been a hit. But then, well, people saw it.

Even the trailer was an abomination.

Womp-womp. If anything, the public should learn to be a bit more discerning.

What else belongs on this list? If it’s missing something, add it in the comments!