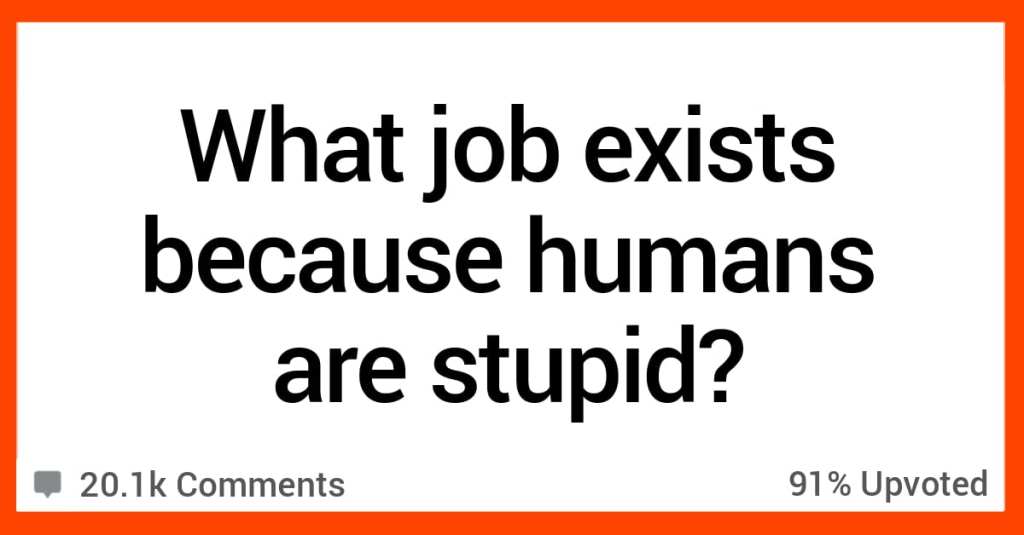 17 Jobs That Exist Because People Are Stupid

There’s a lot we could say about employment, the jobs people do to make money or stay busy, and maybe even about capitalism in general, but there’s no arguing that at least some professions only exist because a majority of humans have no idea how to take care of things themselves.

I’m not talking about specialized stuff like plumbing and electrical, but things that literally anyone could do if they just took the time to learn it.

These 17 Redditors were definitely ready and willing to tell us all the ways people are so spectacularly lazy and dumb that we had to create whole jobs because of it.

Honestly, the only reason i’m here is to slap the emergency stop button if someone starts pumping gas outside their car/gas can.

Oh, and shut off the pumps when I leave.

Save money for retirement – at least 10% of what you earn, gross, in an IRA or employer-sponsored plan. Put it in growth mutual funds or ETF’s, and don’t touch it until you’re satisfied you have enough there to live on no more than 4-5% of the balance per year for the rest of your life. Don’t consider individual stocks with this money.

Establish a basic budget based on your post-retirement savings income and current expenses. Do not spend more than you bring in on a regular basis.

Save a little after-tax money from every paycheck in an FDIC-insured savings account. This is your emergency fund. Don’t touch it if you’re not in financial dire straits.

Once you have at least 3 months of expenses covered by that emergency account, keep saving the money, but flow it to another investment vehicle, such as stocks, bonds, CD’s, treasuries, real estate, precious metals… whatever you are comfortable with depending on your goals and risk tolerance that can at least hold value, if not grow it. This is your savings for home, car, vacation, and other major purchases.

With the possible exceptions of purchasing a home or borrowing for education that will actually pay for itself, don’t take on debt. Pay off your credit cards monthly. Pay your bills on time.
If you can’t follow the above, take a hard look at your lifestyle. Either find a way to earn more money, spend less money, or both. Second jobs are sometimes necessary, or many people just need to eat out less, go to bars less, drive a cheaper car, or downgrade their living situation. Don’t give in trying to impress others or looking good on social media; just do you!

15. This is a really underrated answer.

The companies that get you out of timeshares.

During rush hour, they have police standing in the intersections–not to direct traffic, though, simply to hold their hand up when the light turns red so that people don’t push their way into the intersection.

Basically, a human has to stand in traffic for hours JUST to tell the drivers what the lights mean. It was unbelievable.

My husband is a Labor and Employment attorney for a massive company and gives monthly seminars to everyone there to not send dick pics/s*xually harass one another.

And like clockwork someone in that room does it within a couple weeks.

12. Modern world problems, for sure.

The guys who install rubber padding around telephone and light poles so when we walk and text, we don’t break our noses walking straight into them.

Did you try turning it off and on again? Sure you did. Could you blow into the cable to make sure there is no dust in the connec– Oh the cable was loose?

Have a good day.

10. The signage that’s required on some stuff. Woof.

Safety manager here, a big portion of my job is saying stuff like “please don’t smoke near this flammable liquid” or other things most of us take for granted that people already know.

9. Everyone thinks their dream is to work from home.

I have a side gig doing data entry.

I earn $25 USD/hr copying and pasting stuff from a webpage in to an excel spreadsheet, while doing some light formatting.

I work in an aquarium and we have what I can best describe as floor guides, which are just staff that interact with people and share interesting info about the exhibits. Realistically while that is part of the job the main reason for these people being out there is to tell people to keep their hands out of the Stingray and Turtle tanks because for some reason beyond my comprehension people don’t naturally get this concept.

At least once a day I hear “well why cant I touch the stingrays” and so far my all time favorite outcome of that question was a kid who said “They have the word Sting in their name”. I have wanted to say that so many times, but am unable.

Edit: since this post got some attention I’d just like to point out that Stingrays are relatively harmless and won’t sting unless they are in fear for their life and have no escape. They want to run away before all else and are actually quite friendly. That being said it isn’t that we don’t trust the Ray’s we just don’t trust the people haha.

Also we do have a touch tank with Ray’s in it, but it is curated and the Barb’s on those Ray’s are trimmed regularly as a further precaution.

7. Computers have really generated a ton of paychecks.

My job exists because of stupid and let me give you a pro-tip about computers:

6. Imagine getting paid to do that.

5. I mean, you never know I guess. Whatever solves the case!

Psychic detectives: because why trust a professional detective to be intuitive?

4. Are they all from New York City? Because that’s how they roll there, too.

On crowded nights, Disney Springs has employees working at crosswalks at the intersections from the overflow parking lots to tell people when they can cross.

They’re normal intersections that have lights telling you when you can cross.

People just don’t acknowledge them and will try to run across oncoming traffic.

3. You would think trash cans would be foolproof, and yet…

Met a guy once – his job was putting dirt on potatoes. Somebody along the supply chain washed them pretty well by the time they got to the grocery.

So one guy had to put dirt back on them to make them more authentic.

1. It probably took people just as long to get on board with moving stairs, to be fair.

I had a temp job in a posh department store a few years ago.

The escalator going down from floor 2 to floor 1 had to be taken out to be replaced which took a month. Despite the many, many notices and the signs directing people to the lifts & stairs, a member of staff had to stand at the top of the closed escalator just to direct the public to the lifts and stairs. It broke peoples’ brains and it was worrying to see how many tried to get past the barriers, or got pissed and shouty because there was no escalator.

Like holy s**t how did people cope before moving stairs were invented.

I mean…I really can’t argue, can you?

Do you think they left something out?

Tell us what in the comments!