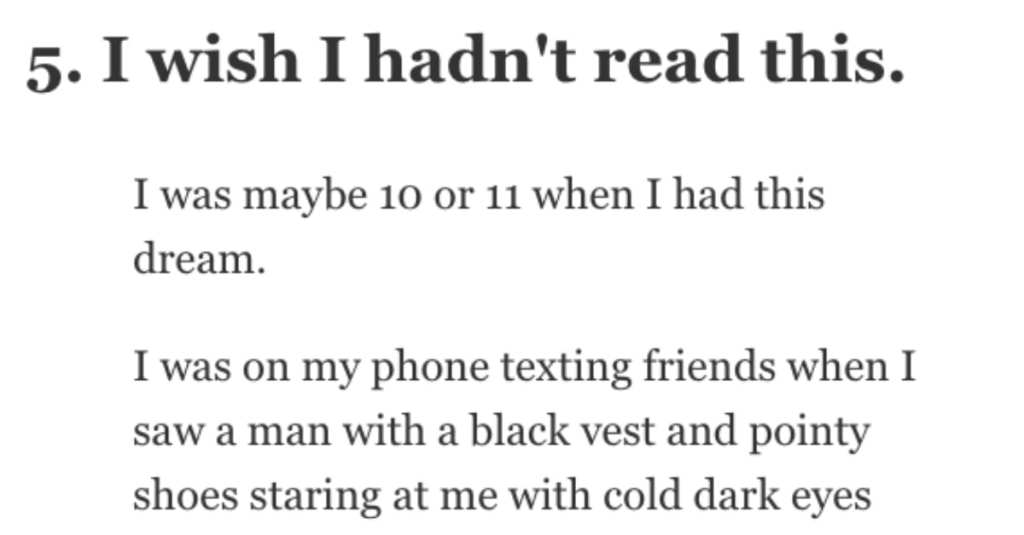 17 of the Scariest Dreams People Can Recall

No one likes having a nightmare, and sometimes, the fact that recalling them can be tough is probably a blessing in disguise.

Or maybe not even in disguise, just a blessing.

These 17 people had dreams so scary that not only did they remember them when they woke up, but they still haunt them to this day.

17. I think that happened on a Grey’s Anatomy.

I had a dream that my family were lying on bombs and we couldn’t get off or they’d explode immediately.

Probably my scariest had to be when I was like three. It started off with a pretty simple birthday party.

When we got home, it was SUPER dark. Anyways, we are all just sitting on the couch when I hear a whirring sound, kinda like the noise a robot makes.

Robot comes rolling out of the extremely dark hallway, then says “do you want to play?”

Needless to say it still scares me to this day, and now I’m thirteen.

I guess this was a lucid dream or sleep paralysis?

Anyway, I woke up in the middle of the night to my bedroom lights flashing on and off really quickly and a really loud voice that sounded like it was coming out of a VERY loud bullhorn.

Then my room started shaking and then I felt myself get dragged out of bed as I clung to the sheets.

It was a couple days after 9/11. I dreamt that I was on the edge of the roof of a building and a plane was about to crash into me.

I decided to jump, and I woke up at that point.

I was stuck repeating the same day over and over again (like in Groundhog Day) and it was one of those days, it’s a Monday, your alarm doesn’t go off, you miss the bus, and on top of that, you miss a conference call.

One of those days, but to the next level.

I missed the most important conference call ever.

The bus was to the city, and on top of that, the boss FIRED me.

And that day was repeating.

This one happened weeks ago…Ok, so I went to sleep, but it wasn’t like any other dream I had.

I couldn’t move at all.

It scared me so badly.

I wait for another dream like that but nothing.

The one where I ate a moldy cucumber on show and tell day and had to go to the hospital for major surgery, but they forgot to give me some of that sleep-stuff and I could feel the pain.

Or one of those ‘desk falling’ dreams where in reality I’m half awake, and in the dream I’m sitting at a desk. Then I fall out of the desk and completely wake up, terrified and disoriented.

OR that one where my worst nightmare came true. I was standing all alone in complete darkness.

Heh, ANOTHER scary dream I had was when I was super young, probably like 7 years old, so anyways I was in a haunted house with my friends, and so it was pretty cool because it was a mansion. So my friends got bored after nothing scary happened, and so they tried to find a chill place to hangout and play spin the bottle (insane children mind), and so we saw a bright light, a tv light, coming from a room.

We walked there and there was a nice tv playing, you know it, Madagascar with the purple octopus. There was fresh popcorn on the ground, so my friends picked it up and watched the movie. I was bored, so I went exploring by myself. I went up the stairs, and I saw a red light coming from a room. I opened the door to find….my childhood dog with red eyes growling at me.

I was so scared I must of started crying in the real world. I woke up before anything could get worse, but this time I wasn’t on my bed upstairs. I was on the first floor bathroom ground crying with my dad just staring at me almost falling asleep. Somehow, I slept walked down the stairs without falling (I was probably walking down the stairs in real life when I was walking up the stairs in my dream) into the bathroom all the way across the house.

Moral of the story, never go into a haunted house to watch a Madagascar movie.

I woke up in the middle of the night and there was this man sitting on the edge of the bed. He told me to ‘join him’ or I would face the consequences. I didn’t know what that meant (I had this dream when I was about 10) so I said of course I wouldn’t join him. He suddenly got very angry and started yelling, so I dove under my covers.

When I was brave enough to peek out, he was gone, so I went to tell my parents. I walked down the hall, but it wasn’t them. It was two completely random people sitting in my parents’ bed. They told me to join them, as the man had, but I was terrified. Somehow, I knew at this point I was in a dream, and I decided I needed to wake up. I ran back to my bed and closed my eyes hundreds of times.

I woke up. Now the door to my bedroom was slightly ajar and I could see my younger brother walking down the hallway. A light was on from the bathroom, and all I could see was the back of his head, and it looked exactly like him, so I ran to give him a hug I was so relieved. But the boy turned around and it wasn’t my brother.

When I actually did wake up, for real, and went down to my parents’ room, and it was actually them there, I cried because I was so happy.

Some days go by, and I had this dream where I was watching the movie with my then boyfriend.

While we’re watching, I realise I’m eating my bf’s fingers.

More creepy than scary, but still.

The movie arrived in my mailbox the next day.

7. That would definitely traumatize a kid.

I used to have this one quite a lot.

I would have woken up from sleeping on my couch late at night. Believe it or not, but the elf from the movie “Elf”, or someone like him, would tell me that I have 15 seconds to get to my bedroom. He never told me but I knew that I would die if I didn’t.

Most times I would get about 3 metres and would then stop dreaming. Only once did I get to my doorway.

I’ve stopped dreaming that dream for maybe a year now. Was a bit weird considering I was only 7, 8 or 9.

I dreamt that I was in the Hunger Games in my own house.

My best friend was there, too. I was part of the Careers, and my enemy, the leader, told me to kill her. And I did.

Then I found out that I was possessed and I finally broke free, after I won the Games.

It was weirdly vivid. I could SMELL it. Sometimes it comes back to haunt me.

I was on my phone texting friends when I saw a man with a black vest and pointy shoes staring at me with cold dark eyes with blood coming out of them.

At this point I started recording and I blinked to wake up but I blinked to a different setting. Now I was on a long dark street with a family holding hand like 5 miles away.

As I walked towards them they got more invisible. So once I start running away they grab my hair and start to cut it.

I was scared because I thought I would be bald. The man that I seen was the dad and he was the only one there once his family disappeared. He then told me to get on the bed that he provided with his powers. I got on the bed and somehow I “fell asleep” I “woke up” to find the man eating half of my body.

I tried to run and scream but he had muted me like a zoom host.

4. I have no idea what this means.

Ok, now this may sound odd but my scariest dream happened when I was about 4 years old. It started out as a normal dream. I was with my grandma, in her bedroom, and she started singing. But when she sang, every she was saying was appearing on something ribbon-like.

Suddenly, my grandma stopped singing and I saw a cauldron. All my family was in it, but I couldn’t move to save them. When I woke up, I thought I was alone, and cried.

I dreamed that I was eaten by my cat. It was scarier than it sounds.

2. Fire dreams are the worst.

I had a dream fairly recently that there was a fire in my room, and my parents didn’t believe me.

May have been mad scarier by the fact that I was at my friends house for a sleepover when I had the dream.

You know that scene in Moana when Maui has a shark head?

THAT’S EXACTLY WHAT THEY LOOKED LIKE AND IT WAS SO FREAKY.

I hope it’s a long while before something like this happens to me again!

If you’ve got had a nightmare like these, tell us about them in the comments.