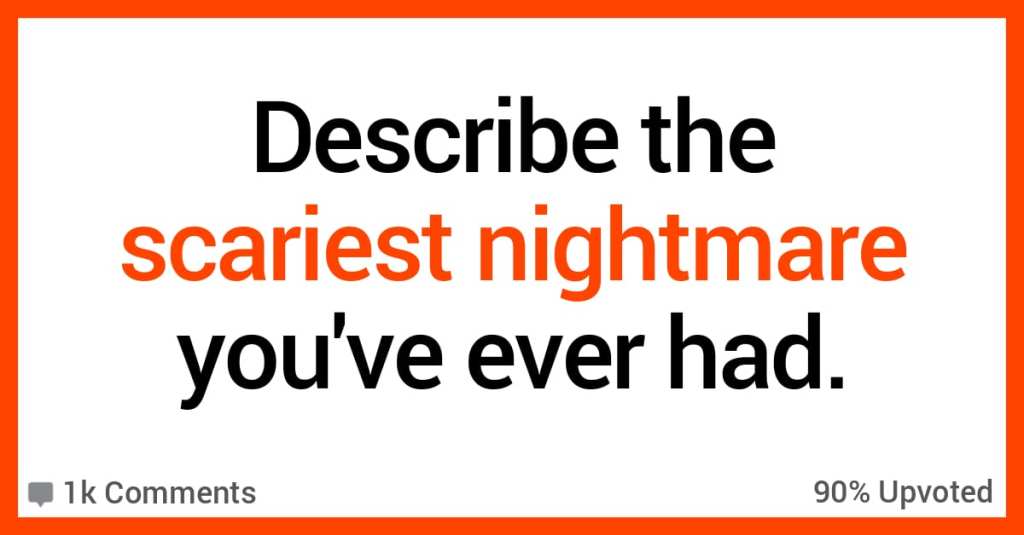 16 People on the Nightmares That Changed Them

Dreams are most often at least a little bit strange, and sometimes that strangeness can take on a darker tone that leaves us, at best, unsettled when we open our eyes.

Then there are the nightmares that make us terrified to go back to sleep – the ones that change us, a little bit, and that we’ll never truly forget.

These 16 are that last type, so be warned before you scroll further!

16. Where the discussion leads…

In real life, it was the anniversary of 9/11, so before bed, me and my parents and siblings discussed 9/11, terrorists, etc. I was 12 or 13. I think that’s what gave me the dream I had that night. In my dream, I was sitting in the backseat of the family van, and my mom was driving.

We were alone on a narrow mountain road. Out of nowhere a guy on a lawnmower (the kind with the two handles you steer with, not a steering wheel) starts following us. He looked like a biker guy (long gray beard, leather jacket. Also no hate to biker ppl or anything) I knew he was a terrorist even though no one said anything.

I told mom that the guy was following us but she didn’t think it was a big deal. I blinked and the car was pretty much gone (just not there anymore), just the floor and seats and wheels, but no walls/sides or doors or anything. I told mom to speed up and she started getting nervous, but the lawnmower terrorist went faster to keep up with us.

Eventually he pulled up next to the car, by this time me and mom were terrified. He pulled out a knife and stabbed me in the thigh and I died and then woke up.

15. Back-to-school nightmares are so strange.

My scariest is a recurring one.

I am out somewhere, and I keep getting hopelessly lost and can’t find my way back. No matter how hard I try, I just can’t figure it out. In real life, it’s terrifying to get lost like that.

Another version is being at school and not being able to find my classroom or my locker. Then I can’t remember the combination. So odd to have these dreams, as I haven’t been in school for about 45 years.

Huh – at nearly sixty, I live on the same street where I grew up – have had the same dream for fifty years. It varies, but basically there’s the growing realization that “they’re going to find the body”.

Got no idea why.

I woke up on a giant cupcake. I tried to climb down but the icing rolled me up and carried me away. It doesn’t sound scary but it was.

I was running down alleys from a man with a gun. He shot my leg and I fell. I was trying to crawl away from him and at some point I turned around to look at him only to find his gun touching my forehead. I couldn’t see his face, but the sound that exploded when he pulled the trigger woke me up instantly.

My entire bed was wet from sweat and I was hyperventilating. The sound that I heard was the thunder outside. Ten years later I was walking to a tutoring job that my university helped me get so I could earn a little cash throughout the semester. I turned off the street into an alleyway and it was the same one from my dream.

I hadn’t even taken a step into it before calling and apologizing to the tutoring group that I would no longer be able to work at this particular location. I’ve avoided that side of the city for four years before graduating.

It might be paranoia, but that nightmare still sits with me today. I’ve had snippets of my dream happen in real life. There is no way in hell I will test the theory on that nightmare.

Mine had to do with Attack on Titan. In the dream I looked out the window and I saw three Titans. My heart literally skipped a beat and I woke up so fast because it felt so real.

I’ve had one really bad nightmare and it involved me at boarding school. I was being tied down in front of the whole school the set ablaze by the headmaster. The worst part was that the flames never burnt out or did my skin burn away which left me in constant blinding agony.
I was untied and forced to wander the school, ablaze and screaming out for mercy to be done and death to take me.

Stuck paralyzed in my bed, strapped down. I heard the faint noise of clattering and something breaking in the kitchen and it was freeezzzinnnggg cold in my room as well. Anyway, fast forward a bit and I am still paralyzed to my bed but suddenly can actually move so I get up and run to my parents room and they have had their throats slit.

I let out a deafening scream and try to remind myself it is not real. I get back into bed and find myself strapped down again and not able to breathe of move. My bookshelf moves and a man with flashlights for eyes creeps around the corner, climbs on my chest and cuts my eyes out and replaces them with flashlights before saying “now you can see the light”.

I woke up screaming and crying needless to say…

A truly horrific one that is terrifying to even think about. I generally have PTSD dreams of being chased & attacked, but this one was worse.

I was going to my house, and there were people working on the power lines behind it. They… fell into the pool with a live wire. Charred skin, dangling, twisted limbs… ugh.

I woke up and barfed, it was too real, too horrid.

7. Unsettling is one word for it.

The other night I dreamt that there was a secret room in my house. When I found a secret door to it, I found the remains of a tribe or something that got stuck in there.

There were a ton of dead bodies and it freaks me out that I wasn’t scared in the dream, or when I woke up. But the fact that that was what I dreamed about is unsettling.

All of my friends from grade school were hiding like they were playing a of hide and seek. I was playing with them. All of a sudden a metal solider (think Legend of Zelda dark night) grabbed my friend and shot them, obviously I ran and somehow I ended up in my childhood house hiding in the linen closet.

As I started to wake up I heard the front door open, saw one of the soldiers walking towards me, and all of my friends from grade school screaming. Then everything went white and I woke up.

So yeah, that scared 8/9 year old me. Kinda scares me now

I became thanatophobic at five. Was at my aunts’ house in Scotland (we live in GB) for the holiday. Had a nightmare about all the people I loved dying. They were just about to rise from the dead and try to kill me when I screamed myself awake.

That dream messed my thought process up big time.

I had a dream where for some reason, when I used the light switch in my room, it didn’t work. I called out to my dad to come fix it. Assuming he was coming by the footsteps I heard, I turned around to tell him what had happened.

Instead of my dad, it was a figure. I knew what it was. It was that… thing… It came up close to my face, its ripped mouth whispering in my ear. “1 19”

I had woken up in a cold sweat. Nothing out of the ordinary. I had this dream about 2 weeks from when I’m typing this. I still don’t know what it means.

Please, if you think you know what this may mean, please tell me.

I am completely terrified of centipedes. Like phobia level totally irrational, complete histrionics.

I had a nightmare where I was lost in a DENSE jungle and a GIANT centipede gets tangled in my hair. I freaked out crying, trying to escape, ripping at my hair, running and running not watching where I was going. Then, I fall over a cliff, centipede still in my hair. As soon as I hit the ground in my dream I woke up with a jolt, sobbing.

My husband had been trying to wake me because apparently I was thrashing in real life, kicking him. I couldn’t be calmed down and couldn’t sleep for a few nights after.

Good Lord I hope I can sleep tonight.

1. When everything familiar disappears.

I dreamed that I was playing cards with some friends of mine. then suddenly everything around us disappears. the only thing I could see were my friends and the floors looking like black water. the walls were gone so it looked like an endless expanse of nothingness.

we looked around and then suddenly something comes out of the darkness. it looked like a big spider but with a longer body going upwards like Slenderman, and with milky white eyes. and with two long arms and long fingers, with a mouth with pointy sharp teeth.

the thing chases us, and usually in my dreams when I’m running from something, I won’t be able to run.. i just kinda feel like im wading through deep water.. I don’t know why.. anyway, then even though I can run, I’m still moving forward and I’m going faster than my friends.

They slow down, and the creature reaches my first friend, and the thing grabs them by their ankles. then it eats my friends leg.. and eats the rest of the body. we all try to run faster but it doesn’t work.

Eventually the thing eats everyone except for me because I’m still running. it catches up to me and then the thing grabs me. then when its about to eat me I woke up..

Not looking forward to my next nightmare, that’s for sure.

What’s the worst nightmare you’ve had, and how did you handle it? Tell us in the comments!