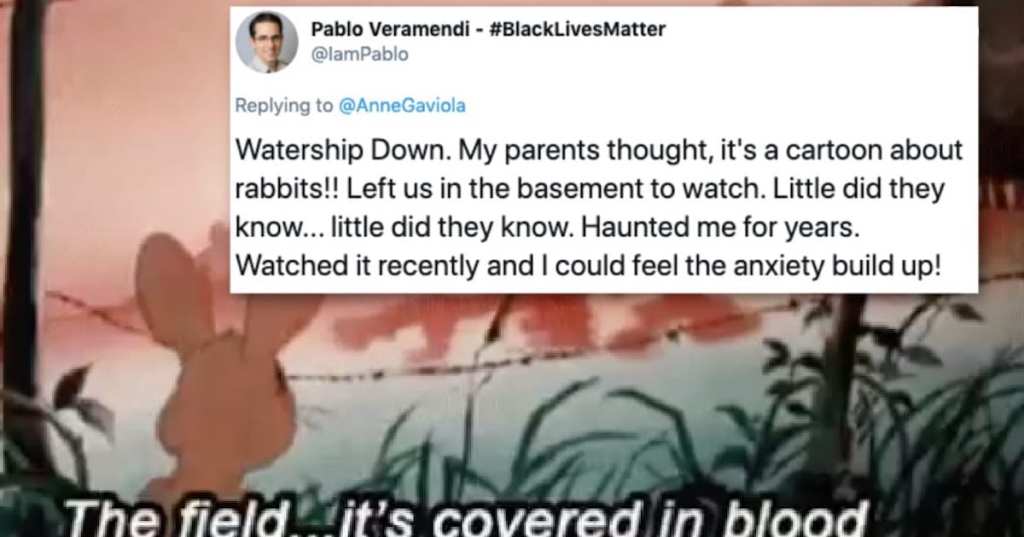 When you’re a kid, you don’t really know what you’re supposed to be afraid of until you see it, or read it – and then you can’t forget it.

Me? I read way too many Dean Koontz novels in high school and still have to pull my curtains the moment it gets dark outside!

For these 13 people, these were the movies that made them realize there were monsters out there…and they’ve never really gotten over it.

If you’re seven, this is some scary stuff.

Original “Night of the Living Dead”..
The ending..this guy😭
(I was 7yrs old) pic.twitter.com/NkU2rKdLoK

12. If you like birds you must not have seen this movie.

Or you’re not right in the head. Only options.

The Thing. I watched that when I was like 10 years old and I was afraid of dogs for a solid month.

wtf were my parents thinking

No one warned me about the book, either.

The original Watership Down. That was some pretty messed up stuff. pic.twitter.com/zqjuI6iRBl

9. Who didn’t watch this at a sleepover?

And have immediate regrets?

8. This must be on most people’s lists.

Unless you’re not human.

Neverending Story. The scene with the horse. 😭 pic.twitter.com/704mV075jt

7. I still don’t like to close my eyes to rinse the shampoo.

And my shower is enclosed by glass.

Psycho. I made sure I always had a clear shower curtain after seeing it. 🔪 pic.twitter.com/tTpZU3yofC

Who thought that was a good idea for kids?

Still struggling to come to terms with the fact The Witches was supposed to be a kids’ film. pic.twitter.com/wyTNeGlsEY

5. Pretty sure this traumatizes adults, too.

I know it gets me.

The Lion King. Mufasa’s death scene had me in bits. I was only a kid and had never really thought about death. It still gets me now. pic.twitter.com/k2tJkNkyXE

I would have needed to be institutionalized.

Maybe that makes it even scarier.

Legit thought there were cameras everywhere and I was the star of the show for a bit thereafter. (~9 years old)

Little did I know the future that would soon be upon us… pic.twitter.com/ikre1RF8AT

2. This just about ruined me in middle school.

I used to think animals were so sweet before that.

Pet sematary, the original. Didn’t help that I was attacked by a barn cat after watching it.

1. If you haven’t seen it, maybe don’t watch it with your kids.

Or in the dark when you’re home alone.

Some of these definitely did a number on me, too!

What was the scariest movie you watched when you were too young? Tell us in the comments!