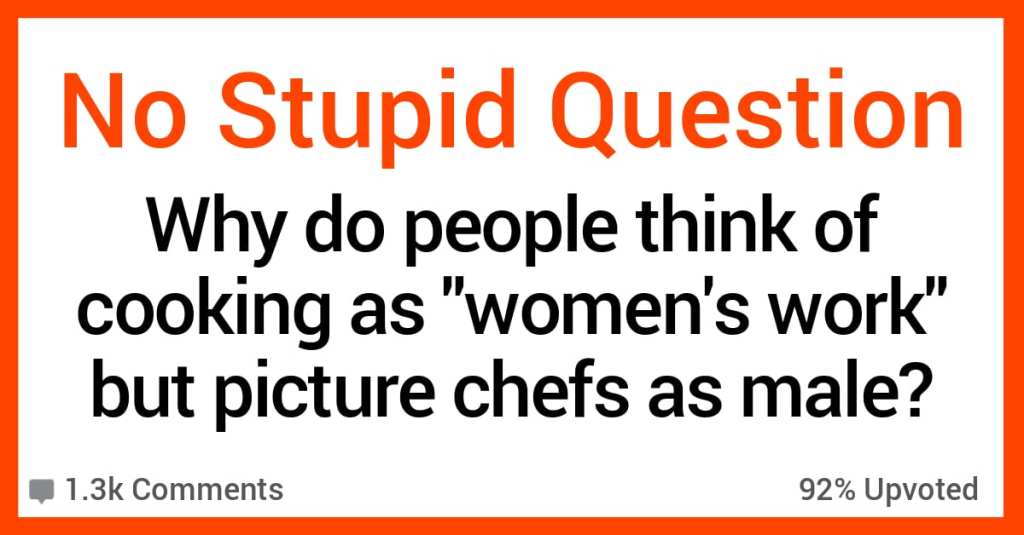 People Answer the Question “If Most People Think of Chef’s as Male, Why Is Cooking at Home Thought of as Woman’s Work?”

Stereotypes are weird things, and misogyny is nothing if not insidious. There’s no reason for people to associate the job of “chef” with “man” these days, but I would venture to say that most people probably do.

There’s less reason for cooking at home to be seen as something women do, but ask the majority of two-person households out there who cooks most nights.

This guy wants to know why those two stereotypes co-exist and honestly, I’m pretty interested in these 15 answers, myself.

Why is it that being a chef is a male stereotype but cooking at home is a female stereotype? I don’t get it? from NoStupidQuestions

If given the chance to have a stay at home husband look after the kids, I’d imagine many more women would go on to have professional careers in the arts.

But that’s more of a cultural shift that would be needed I feel, maybe in the future it will shift more

Because cooking at home doesn’t pay!

For example knitting used to be a sole male profession back then since it was highly paid. As machines were introduced in the industry the pay plummeted and guess what? It became a female craft.

That’s how society traditionally worked for ages. What is profitable is man’s work and women work for nothing or little pay.

13. Time to change the default.

Gardening and flowers are girly but landscaping and top experts in the field are men.

I think it goes back to when women didn’t work so all the professionals in every field were men out of default.

This goes with a lot of professions. Teachers vs professors, nurses vs doctors.

other answers here are pretty simplistic so basically:

women were the primary cooks up until the concept of going to a place specifically to eat a quality meal (i.e., a restaurant) became popular. remember that the concept of restaurants (as we know it today) didn’t really exist until the late 18th century.

once people realized that this was a potentially lucrative business, women were pushed out. and, in many places, women were not allowed to hold property or control their own money (there were exceptions to this but usually only for already upper class women). therefore, there was no real way for women to wrench this business back from men. the label of “chef” helped the men distance themselves from what was otherwise considered domestic work ,or “women’s work”. women were “cooks” in the home, men were “chefs” in business.

this distinction has only recently began to go away.

tl;dr: the advent of the modern restaurant forced women out of their traditional work because of the opportunity for men to make money. those men became “chefs”, and the women stayed “cooks”. only now just starting to shift.

9. The only answer we need, really.

The patriarchy is one hell of a drug.

Cooking at home is associated with caregiving. You care for your kids, partners, etc.

Cooking in a restaurant is associated with making money, and is well known to be a high stress environment.

Caregiving stereotypes are directed at women, while men’s stereotypes surrounding being a breadwinner and dealing better with stress.

Women are expected to be able to cook because it’s their duty to their families.

Chefs are supposed to be artists, something traditionally male oriented. It’s a career.

I assume it’s because home cooking is seen as more of a chore, and being the head of a prestigious restaurant is a respected profession.

Back in the day people used to believe women shouldn’t work, but should instead be taking care of the home while the men went off to work.

It’s a stereotype because it’s true. According to the first Google result I lazily pulled up whole searching “percentage of female chefs”, only 18.7% of chefs and executive chefs were female in 2012. That’s four out of five chefs being male, a huge discrepancy.

Why? That’s more speculative, but being a chef is a very different skill-set to being good at cooking. I love cooking at home (I’m female), but would loathe running a commercial kitchen. Because the cooking’s only part of it, and the rest is managing staff, running a physically demanding, high-pressure, competitive, somewhat physically dangerous job with write an aggressive culture (lots of shouting, swearing and general motivation-by-abuse) with hours that don’t mesh well with having a family life. I imagine it psychologically appeals to men more than women on average, just by the nature of the beast. And that’s OK.

As for cooking at home being a female-dominated activity, 70% of women cooked a home in 2018 as opposed to 46% of men (again, first result of low-effort googling). So the stereotype is less accurate – men cooking at home is on the rise – but still not entirely wrong.

The reason for that is probably historical – throughout history women tended to stay around the house more, taking care of the children, while the men worked inside or outside the home at a more specialised task (being a cobbler, lawyer, blacksmith or what-have you). It just makes sense that the person who was in proximity to the kitchen, and had the time to prepare food, would do it.

And in many cases, historically, it wasn’t a simple as home cook vs chef. Farming women would often earn money though food preparation, making cheeses and preserves to sell, winning prizes for their signature dishes at the county fair, or taking in boarders.

As women entered the workforce the idea that a wife ‘should’ cook has persisted, even when it makes little sense because she’s out of the house as much as her husband. But that’s changing, and fairly rapidly, these days – although it’s worth mentioning that even working women generally work fewer hours than working men, on average.

It pays well for the type of profession it is.

It’s a profession that a lot of people love doing. for example, being a plumber pays better but nobody wakes up in the morning happy to be plumbing, ya know.

Read that somewhere, gist was: because the cooking are different roles here, at home it’s the serving (the family/husband) in a restaurant that role is the server (which is stereotypical the female part in a restaurant) while the chef (cooking) is the leader in a kitchen/restaurant.

This is a pattern across many different art forms.

As others have said, it comes from gendered power structures.

I’m going to replace the word “chef” with “cook” to answer part of this question.

The majority of cooks, myself included, come from rough or self-destructive backgrounds. Addicts, alcoholics, convicts, etc. The majority of these cooks are male; not entirely sure why, but I like to think that its a community that is more welcoming to those who have been through the same shit and are just trying to get through life while females in the same boat tend to have other options. Also, the background check to be a cook is almost non-existent. Statistically there are a lot more men with criminal records than women. A lot of these cooks do fall in love with it and end up going on to become chefs with a good salary instead of living paycheck to paycheck.

That’s just my guess though.

As far as women in the kitchen at home: 1950’s TV and years and years of women being told “you don’t need to work, stay at home and raise the kids and make dinner” is my best guess.

We need to stop all stereotyping! Root it out in yourselves, people – that’s the best place to start.

If you’re a man who likes to cook, tell us in the comments whether anyone in your life thinks it’s strange, or gives you a hard time.