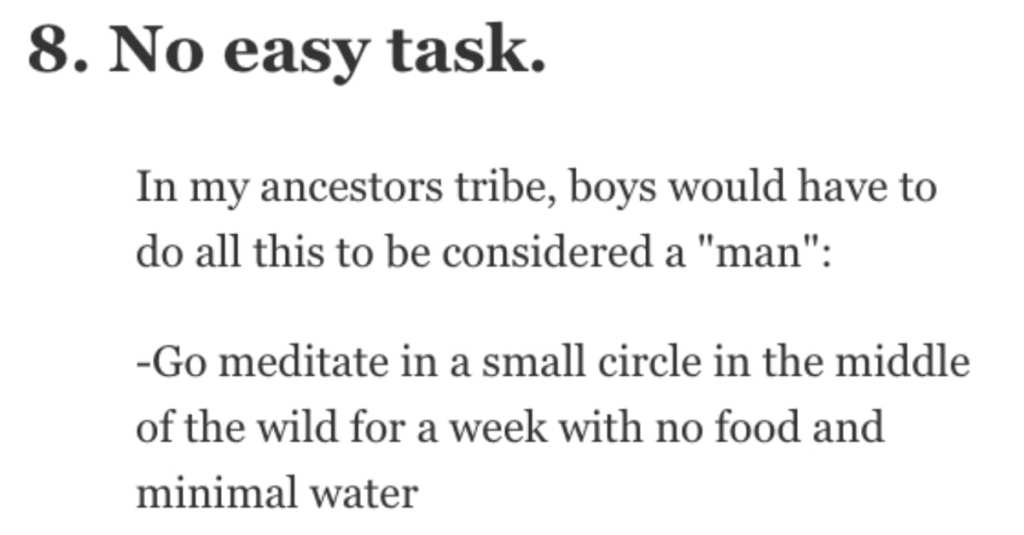 17 People Muse on the Wildest Things Our Human Ancestors Did

It’s pretty weird to think about all of the trials and tribulations that previous iterations of human beings struggled through just to make it from dawn until dusk. Their coping mechanisms seem out of this world to us, but for them, it was just daily business.

If they could watch us for a day, no doubt they would be just as amazed, but here are 17 things our ancestors did that definitely impresses.

17. There were a few intervening steps.

Gave the wolf some scrap pieces of meat for protection.

Now we have pugs.

16. They were engineering geniuses.

The romans with their cement, and the fact that it took so many years for us to realize that when they said water in their recipe.

15. Some unlucky person did the taste-testing.

Pretty much every known edible and poisonous plant was the result of ancient trial and error.

How in the f**k did people draw full continents based solely on sailing the sea?

I can’t fathom the effort it took to map something like Greenland.

Specifically some areas in math and physics.

Like damn, there has existed some really smart people just the last thousand years.

Cut holes in their skulls for fun or to cure headaches.

The Polynesians sailed across the Pacific and settled Hawaii eight hundred years ago.

Somehow they figured that there was land in the middle of nowhere, and figured out how to make it there

10. They spent a lot of time staring up.

Map the movement of stars and planets to a startling degree of accuracy.

9. And thank goodness for that.

Figured out how to use electricity.

As an electrical engineer, and looking at all the “magic” math involved, this also boggles my mind that people went from the transistor, just 80 years ago, to what we have now.

In my ancestors tribe, boys would have to do all this to be considered a “man”:

This is just step one of many

Survive what for most species would be certain extinction.

96% of the population died around 100 thousand years ago in an ice age, and we still managed to live with barely 10,000 people!

6. There were always people who thought outside the box.

A Greek proved that the world was round & even guesstimated the circumference of the Earth to a startling degree 2,500 years ago.

5. Humans have always had great potential.

Feats of architecture, especially those linked to other purposes- like the Mayan hurricane warning buildings (basically giant whistles), chichen itza temple stairs casting a shadow that looks like a slithering snake on the equinox, or the same temple returning a claps echo as a goddamn bird sound. Amphitheaters, nazca lines, easter Island heads, etc.

The absolute SCOPE needed to even conceptualize these things is f**king insane. Like, yeah, maybe building a big ass head and burying it isn’t that impossible, but f**king why was it even thought of as a possibility? How on earth did someone think of lining up holes through buildings to match up perfectly with where the sun will be each solstice? How the f**k did someone manage to navigate from south America to Africa in a boat made of f**king reeds to deliver coca to Egypt?

I guess the common denominator here is that I’m most impressed by our ancestors’ ability to dream. Humans are insane. Always have been.

Discovered that many foods taste better when you add fire.

Settled in some pretty hostile places.

I live in Saskatchewan Canada and have access to modern technology when it comes to heat, cooling, snow removal etc and this place is still kinda miserable to live in sometimes.

The fact that people have lived here having nothing but a wood stove and drafty walls astounds me.

2. They needed something to do.

They willingly hopped on a ship to a far away land without knowing much about their destination.

1. All the rest is window dressing.

And reproduced successfully too! You are only alive because every single one of your ancestors survived long enough to reproduce successfully – literally all the way back to the first living organism in the chain! #showerthoughts

I don’t understand people who don’t love history – all of this is fascinating.