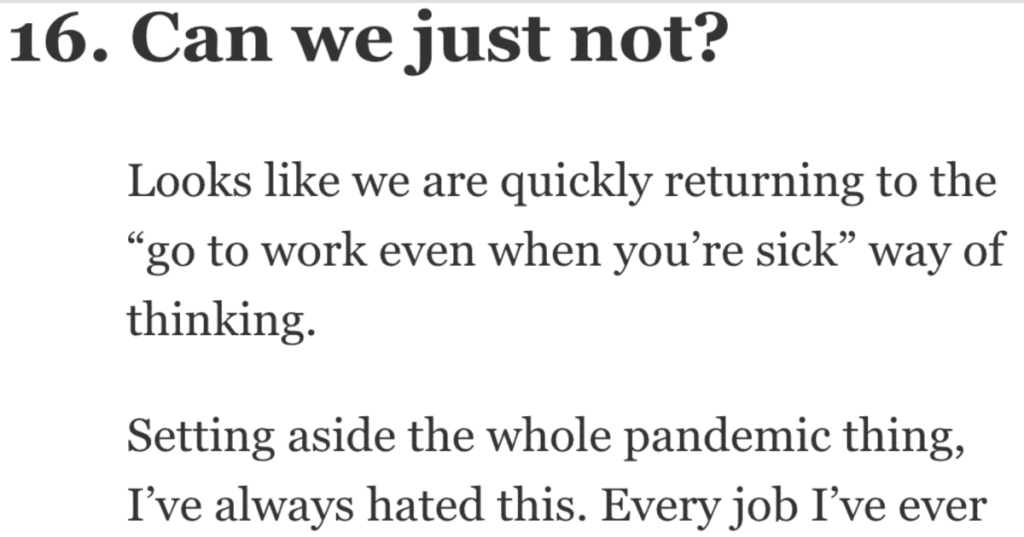 Society has come a long way with recognizing when behaviors are ultimately toxic and unhealthy, but as with a lot of things in this world, it can seem as if it’s two steps forward, one step back.

These 17 behaviors are widely recognized by many as being toxic, but society is still more than willing to let them slide.

White collar crime. And it often appears that the more money involved in the crime and/or fraud, the less likely commensurate repercussions will be brought. The consequences of big money financial fraud are widespread and significant.

It ruins many lives and often leads to the death of innocents.

Looks like we are quickly returning to the “go to work even when you’re sick” way of thinking.

Setting aside the whole pandemic thing, I’ve always hated this. Every job I’ve ever had (aside from my current job, thankfully) is always super chill with the theory of calling out sick. “If you’re sick, we don’t want you here! You need to rest and get better, and we don’t want other people getting sick!”

Overworking and lack of sleep.

Plus missing meals to work more.

That Family is allowed to not respect boundaries.

It’s something I see a lot and often trying to set healthy boundaries with them makes them treat you like the bad guy. And media and society tends to promote this behavior as love, when it’s often actually dysfunction.

There’s a difference between being close and taking care of your loved ones and being expected to give up reasonable rights to personal space or to self sacrifice for them.

Picking on people for liking something.
“Oh lol you’re into Pokemon at 30?”
“LOL He’s a furry!”
“LOL She still collects Barbies! at 45!”
Is any of this hurting you or anyone you know? Likely not. If it’s not hurting someone, you, or a loved one, shut up. Let people enjoy what they do.

My mother hates that I’m a nerd. She can’t stand it but she lowkey supports me. She likes Pokemon from afar but is also not into it. She can identify a few. Sure, I’m 30 and I love Pokemon, but most of my generation loves it too. I stood in line with a bunch of now millennial parents to get Pokemon S/V.

People still outright judge if you enjoy shit. I also have a pair of heeleys, so does my boss, he’s 24. He wears them all the time. I wore them day one and he thought it was awesome that we both had a pair.

That if you agree with a majority of people, you are correct.

Believing that being a parent is about power and control and not guidance.

8. The entitlement is real.

People have gotten absolutely insane when it comes to celebrity culture – between inviting celebs to their wedding/prom/other big life events, bombarding their social media pages, or waiting outside their hotel rooms or houses, it’s nuts.

People feel so entitled to time and attention and it’s just gotten worse with social media making everyone so accessible.

Scorsese crime movies tend to glorify this, and even the inevitable fall of the protagonist is romanticized, perhaps inadvertently. .

The “cute but psycho” mentality.

It’s not cute to be toxic or treat people like crap because you think it’s “cute” or acceptable because of your attractiveness.

One thing that bothers me as a gay man is the idea that there’s a right way to be gay, and a lot of people both within the community and outside it see not conforming as internalised homophobia.

It really bugs me that me liking rock music and not enjoying drag is seen as trying to distance myself from these things or being ashamed of my s*xuality – it’s like I can’t just like what I like, I’m making a statement. I’ve had queer people make a point of humiliating me or act like I’m a shame to the community because I don’t like the right things, and plenty of straight/cis people either question my s*xuality or act confused when I tell them I’m not into Lady Gaga or don’t care about Drag Race.

These things are fine, for the people who like them. I wouldn’t want to tell someone else they can’t enjoy the music they like, but it feels like this is just seen as the default in a way it isn’t for straight/cis people, and it just seems ludicrous to me, but a lot of people seem to genuinely think that me liking rock/metal music is some grand statement about how I’m not one of those gays, or that I need to get over myself and start listening to what they think I should like.

Take drag for example. I totally appreciate the work drag queens have done, and continue to do, for gay rights. They inspire people to live authentically and be themselves, but a lot of people seem to think that because I’m a gay guy who doesn’t generally enjoy it (apart from a few exceptions like Hedwig and the Angry Inch, Divine, Dame Edna, and Lily Savage) I’m not being authentic, or I’m somehow hiding myself.

Excusing bad behavior or toxic people because “they’re your family”

People treat the two party system like teams in a football game.

They excuse bad behavior from the side they support and do everything they can to make the other side look bad. Often they treat the two sides differently for the same behavior.

It gets really bad during elections, where you cant even be critical of your own side when they’re wrong without being accused of supporting the other side. Or some other accusation in the extreme.

I remember a (fake) story going around social media about a woman who ran over her husband for voting for Trump and the responses were overwhelmingly in support of her actions. If that isnt toxic, I dont know what

Filming someone making a mistake (not crimes) and posting them on the Internet, without censoring their names and/or faces, for them to be judged and humiliated.

This weird culture where couples go behind each others backs and snoop through their phones is really weird to me. Especially when they get mad for not finding anything.

Or when asked to see their phone they get defensive. It’s very childish imo, especially when its 30+ year olds doing it.

Yeah, we need to cut this out, don’t you think?

What else belongs on this list? Tell us in the comments!