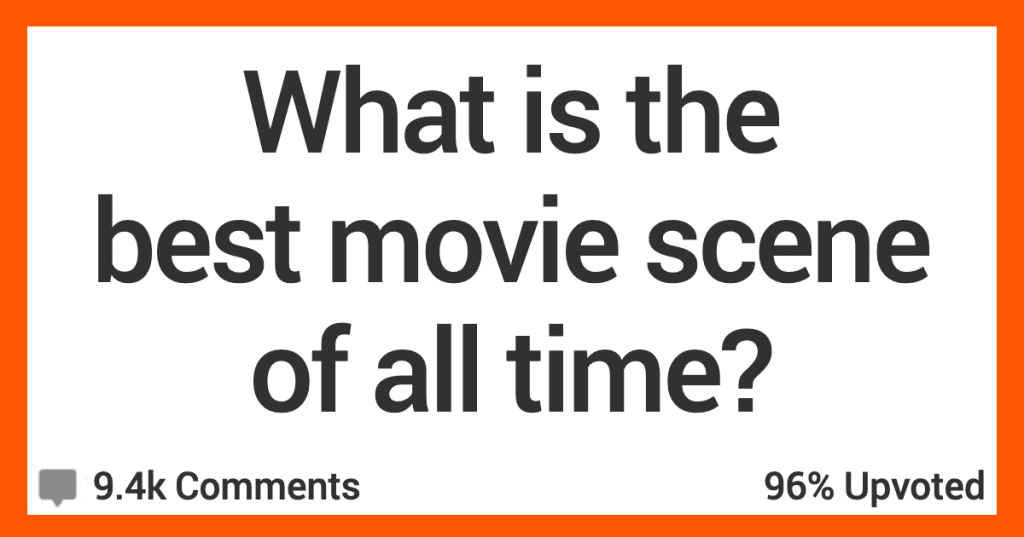 What’s the Greatest Movie Scene of All Time? Here’s What People Said.

I love movies and there are specific movie scenes that will be burned into my brain until the end of time because they are just so memorable.

Or, at least they are to me…

And that’s what’s so special about cinema!

The stuff that sticks with you makes you happy in ways that you can’t describe.

What’s the best movie scene of all time?

“It’s when Dorothy steps out of the house into Technicolor and into a new world. It changed film.

The emotional aspect is unreal. That scene is forever engraved.”

“When the T Rex showed up in Jurassic Park.”

I never noticed until recently but there is no music whatsoever during that scene. 99.9% of films would force in a score to up the tension or pop in a few stingers to make sure the audience is perked up.

Nope, not the JP paddock scene. The rain served as the score and the scene was 1000x better without background music.”

You could cut that tension.

4. Cinema at its finest.

“The baptism scene in The Godfather.

Michael not only renounced Satan but he also settled all the family business that day.”

“The Good, the Bad and the Ugly.

The showdown at the Sad Hill cemetery.”

“The Silence of the Lambs.

The last scene that Lecter and Clarice see each other, when she tells him about living with the rancher after her fathe’rs d**th. How if she could just save one lamb it would be okay.

The acting and the writing are so magnetic that it’s just a 5 minute close up and you are totally compelled the entire time.

I heard they actually filmed flashbacks to cut into the monologue but the director thought the acting was so strong that the flashbacks actually hurt the scene.”

7. You can’t handle the truth!

“No matter how insufferable I find Tom Cruise, watching him question Jack Nicholson in A Few Good Men is mesmerizing every time I watch it.”

And they knew it would be powerful enough that the VA opened a special hotline during opening weekend to counsel vets dealing with PTSD triggered by the film.”

“The scene in Kubricks 2001 A Space Odyssey where the ancient hominid picked up the bone and used it as a weapon (from memory) then threw it spinning into the air.

The shot follows it up as it slowly changes into a space station and we’re bought into the future. In that single sequence we’re taken from the moment of the very first use of a tool to its ultimate conclusion millennia later, it tells the story of our technological evolution in a few frames, it implies the subsequent technological advancement of humanity through history.

“For me its the scene where Forest Gump meets his son. I love that movie.

I was a ’90s kid and for some reason Gump taught me a lot about the world I didn’t understand. He was like this slow witted observer of all the biggest events that changed American history from the ’50s through the ’80s.

All the time we see him as stumbling through life getting constantly lucky, but always driven by his love of friends and family, and Jenny. It never even occurred that he might be self aware. Then in the final act he finds Jenny in her apartment and she tells him they have a son together.

The realization that he understood his place in the world the entire time, and still managed to be the person he is, it wrecked me. That film is deeply sentimental for me for other reasons but when I think about the first time I saw that scene and how deeply it affected me, I haven’t had such an emotional experience from many other scenes. It won best picture that year for a reason. It really is a fantastic bit of story telling.”

“The beginning of There Will Be Blood is up there.

No dialouge, but you’re able to find out so much about the main character. You know Daniel before the story even begins.

The music is great too, Johnny Greenwood from Radiohead did the soundtrack.”

“I will d** on the hill that the ending to Jaws is an example of the perfect climax.

Quint is d**d, Hooper is indisposed. The Orca is sinking rapidly and Brody is trapped in the cabin. A combination of hope, despair, thrill, and terror, all wound together by brilliant cinematography and John Williams’ famous soundtrack leads to the ultimate duel of man vs. beast.

Brody is on the parapet, rifle in his hands, watching the shark circle closer with the oxygen tank jammed in its teeth. Brody goads the shark into attacking. “Come on… Show me the tank.” He growls. “Blow up”

The shark begins its final approach.

Brody fires the first shot. It misses wide right, whizzing through the water as a trail of bubbles. He fires again, missing the tank. Williams’ score escalates, becoming louder than even the bang of Brody’s rifle. He squints down the sights harder. “BLOW UP!” He fires again, missing. Down to the last bullet. The shark’s snout breaches the water, its eyes lock onto Brody’s.

An eruption of sea water, blood, and shark matter. Hunks of flesh rain down. Brody opens his eyes. His expression lights up with triumph. Then he cheers, a release of all his stress, terror, and grief, now a glowing victory.

The shark’s corpse falls to the ocean floor to the melody of a piano. Hooper resurfaces to reveal he’s alive. The two men laugh, mourn the loss of Quint, then paddle home on a makeshift raft.

Hooper chuckles. “I can’t imagine why.””