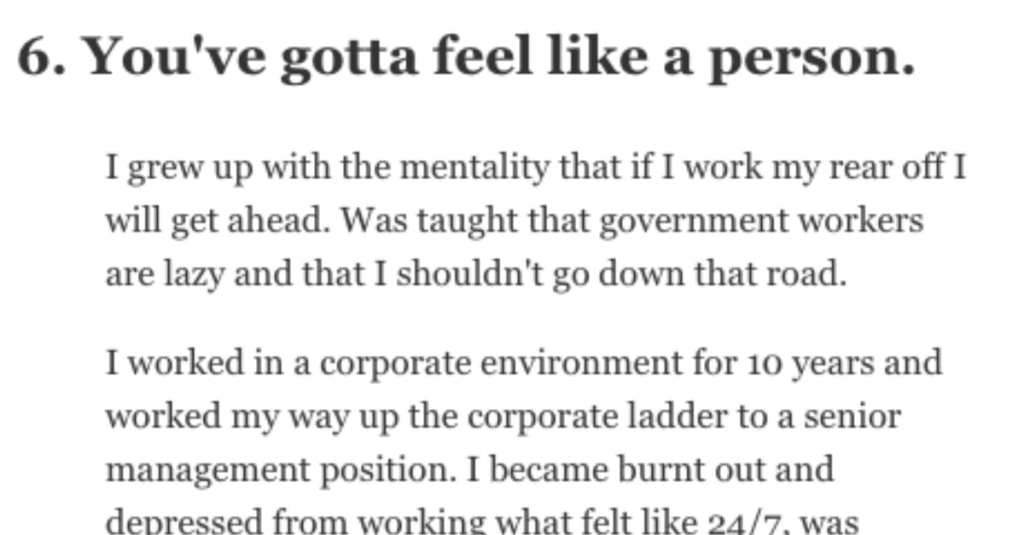 17 People Who Became the Very Thing They Swore to Destroy

When we’re young and brash, we think we know what and who we’re going to be for the rest of our lives.

These 17 people woke up one day and realized they’d become the thing they’d previously sworn to destroy.

I work in retail, once I had to ask to see the manager because a worker was refusing a refund even though I had my receipt, the item was in perfect condition and it was within the warranty.

I was at a different store so no one knew I was an actual employee for the company and the manager realised the worker legit just never got taught how to do a return and was just refusing any returns because he didn’t want to ask a manager.

So technically I helped the guy but hurt my soul to get someone to call the manager over for me.

“No we’re not going to McDonalds, we have food at home.”

I have a similar story to that. I was working at Honda as a design engineer and has a company lease vehicle that was pulling left and the dealership kept making excuses and not fixing it.

I eventually called the customer service line and the person on there was extremely rude and unprofessional and kept saying things that simply weren’t true about the issue and how the company’s warranty works.

Finally I got sick of it and played the “I work for Honda” card and said it was an embarrassing that this is the level of service that normal customers are getting. The person on the phone then doubled down insisting that if I do work for Honda then I am not allowed to say bad things about the products and he is going to report me and get me fired.

I told him literally part of my job is pointing out bad things about our products and then making sure they get fixed and feel free to report me because I was planning on doing the same. I told HR about this the next day and she laughter at the claim that I couldn’t complain because I was an employee.

She said she would let me know if a complaint actually came up against me but she would follow up with that customer service agent as that is not how they should be dealing with the public or other employees.

I was an absolute hell child at school and hated all my teachers… I’m now a teacher.

13. You do have to speak up for yourself.

As a long term server/ bartender/ manager I hate having to send my food back, it has to be like totally messed up.

I like my steak rare, but if it’s overcooked up to like midwell I can still enjoy it (might need some kind of sauce if it’s MW) but I was at a high end restaurant and my rare steak that cost like 50 bucks was burned to shit, I had to speak up…. I was as nice as I possibly could be but still felt like a monster

I’ve always been about the punk life and espousing anti-corporate ideologies. A few years out of college I was working as a job coach for teenagers with disabilities, so I would dress in business casual to model appropriate work attire. My car that was over a decade old driven hard was about to die, so I traded it in. I wanted something with 4 wheel drive and good storage capacity, as I did a lot of camping during the summer, so I bought a used Rav4.

My girlfriend at the time was working at a canteen in a VA hospital that sold Starbucks coffee, and she’d bring some packages of grounds home if it was old.

Anyways this all converged one day as I’m listening Anti-Flag and realize I’m in khakis and a button up shirt, drinking Starbucks while driving my SUV to work.

It took years before I was finally able to build up my confidence after being bullied in High School.

After a couple of years working however, I realized I’d been picking on people at work just for the “fun” of it. I had always dreamt of rubbing my bullies’ faces with my success but I subconsciously turned into a bully while chasing that imagined success.

10. This is my favorite story.

My nephew begged me to play Fortnite with him for a week straight. My sister was on vacation and I let him use my Xbox as much as he wanted to. I absolutely hate this game, but it made him happy and I really didn’t mind watching him play.

After watching him play several matches I understood the building mechanics a little better, so I looked up the controls. His eyes lit up when I finally went to him and said, “Okay, let’s give Fortnite a shot.”

We loaded in, grabbed some weapons, and hugged the wall of the storm. (His go-to strategy, I wasn’t going to argue with a 7 year old.) Made it into the remaining 8 players, finally got some contact, and I scored my first kill. Before I knew it there was just us and one other player. He was clearly skilled, he took me down to the ground. As I’m bleeding out near death, my nephew blasts this guy with an RPG, “Leave my Uncle alone!”

Boom. Victory. In my very first match. I looked over at my nephew and he was just crying his eyes out. He had never won a match before, ever. Playing two years and never won a game. I thought he was upset but it was this just sheer happiness I’ve never seen in him before.

I still really don’t care for the game that much, but we made a great team and now we have something to bond over together.

As a teenager I was a pop punk. Hated the government, loved “anarchy,” did tons of drugs, swore I’d never be one of those mainstream sheep.

Now I work in an office, for the government. I don’t do drugs, I own a house, own stocks, think about my retirement portfolio.

Yeah, I sold out, but of my friends who never did, two died of ODs and one is 40 years old working the night shift in a gas station for minimum wage. If that’s what I had to look forward to, I’m ok with being a sellout.

8. And life has come full circle.

My dad was a huge Neil Young fan. He would always blast his Neil Young tapes and CDs when we were cleaning the house. I despised it. I hated his voice so much. I hated everything about that music.

Except now I love it.

When I started liking mustard on things.

I grew up with the mentality that if I work my rear off I will get ahead. Was taught that government workers are lazy and that I shouldn’t go down that road.

I worked in a corporate environment for 10 years and worked my way up the corporate ladder to a senior management position. I became burnt out and depressed from working what felt like 24/7, was treated like a robot and couldn’t turn my brain off work. I would go to bed and wake up reading and writing emails. On the phone to and from work.

I quit that job and got a management position in government. Work life balance is amazing, I still work hard but only during work hours now haha. I feel like a person again.

I ate an entire box of double stuf oreos in one sitting while playing some games. I like to think of myself as a generally healthy person.

I exercise and have been trying to reduce my meat consumption to have more balanced meals. But man, when I could feel the crumbs of those black oreo cookies and see their smudges was a time when I thought to myself – “I have become a monument to all my greed”.

I’ve become the old man who wants peace and quiet in his home. Also parking in my driveway when you’re not coming to see me is the best way to start a problem with me.

Growing up my family didn’t have the money for luxuries, and my perspective was formed by that experience. I used to scoff at expense and excess as a pointless waste.

But having nice things is pretty sweet, ngl. Wouldn’t go back.

I spent most of my time at the job hating the ease with which people in authority could screw up the lives and careers of their subordinates. I felt that a lot of leaders quickly lost empathy once they gained power.

All of which came flooding back to me my last year once I was in a position of authority and was writing up the paperwork to have my new soldier punished.

When I promised myself I wouldn’t end up like those lazy good for nothing kids that don’t have a job, still live in their parents house and do nothing but sit around all day, guess who does all that?

I mean, man. It happens, right?

Have you had one of these moments? Tell us about it in the comments!