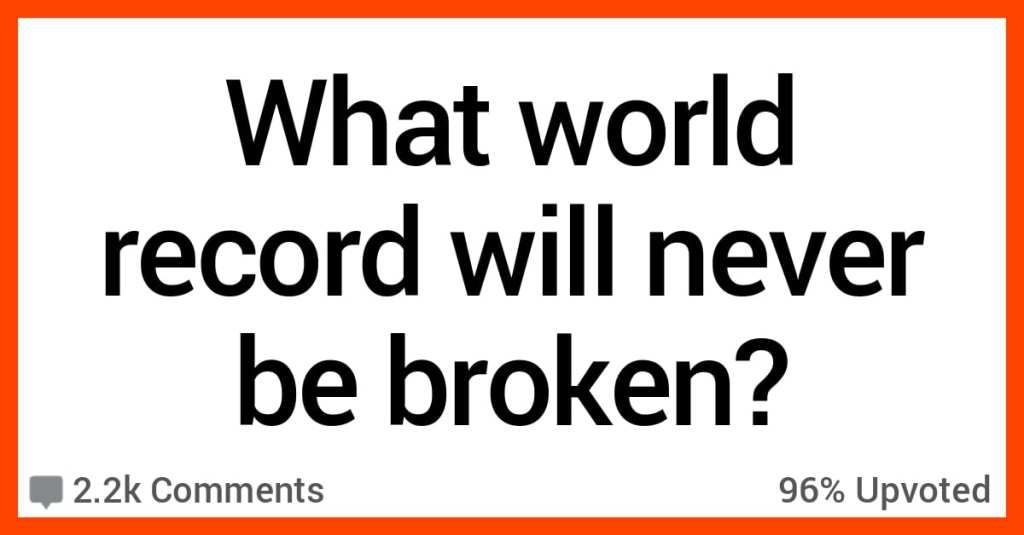 When people break a record, whether it’s sports, something random, or something that’s even out of our control, I think we have to assume that someone, somewhere, someday, is going to break them.

It’s the nature of records, after all – they’re made to be broken and all of that.

Even so, some of them probably never will be, and people say these 17 will probably stand the test of time.

17. Because people cannot be trusted.

They retired all of the “world’s heaviest cat/dog” type records because sh%theads were overfeeding their pets in an attempt to get the record.

The previous winner for cats was a tabby who apparently weighed 46 pounds (generally a healthy range for domestic shorthairs is 8-10 pounds) and I sincerely hope no cat ever gets anywhere near that big again, that kind of animal abuse just breaks my heart

I know I’m late to this but there is an oil well in Pennsylvania that is the world’s “oldest continuously producing oil well”. Its the McClintock #1. Drilled in 1861. It still produces about a barrel of oil a year (31.5 gallons) but most of it is salt water.

It’s off the side of the road and only a small sign marks where the little park is. I just think it’s a cool piece of history.

15. This one will be interesting to watch.

Best selling album ever. Thriller will have that record until the sun burns out.

John Stockton’s all time assists in the NBA. It’s insane, closest is down by 3,715 assists.

The highest horse jump with rider. A thoroughbred jumped with its rider 2,47 meters high. Hopefully this record will never be broken.

Greatest percentage of cars on the road at any one time.

For a hot minute back there, the Model T Ford comprised more than half of all consumer cars on the road.

Lisa Sparks is her name.

How many beers in one sitting. Andre the giant has kept that record at 110-120 beers.

He was a 7ft 4inch tall man weighing in over 500 pounds. This was in a 6 hour period with his manager who drank 56 beers himself. The bar tab itself was at $40k. Record has been there since 1976.

9. So many immortalized baseball players.

I doubt with modern technology anyone would get away with being a cannibalistic serial killer for that long.

7. Are you not entertained?

The record for the movie with the most tickets sold is still Gone with the Wind, which was released in 1939. It has sold an estimated 202,286,200 tickets across all of its releases.

While the records for highest box office earnings get beaten every few years due to inflation (with Avengers: Endgame currently holding the record), it’s unlikely that the record for the number of tickets sold will ever be beaten since people don’t go to the theater in numbers as large as they used to now that we have television, home theaters, streaming services, and other ways to keep us entertained.

Longest siege in the world: Siege of Candia, 1648-1669. Herakleion was sieged for 21 whole years. Modern weaponry guarantees that will never be bested.

Edit: some people in the comments corrected me. It seems that the actual longest siege is the Siege of Ceuta 1694-1720. However, when searching “the longest siege”, Google answers Candia (Crete), something I already knew. Idk guys.

5. And yet people keep trying.

The water speed record. As I understand anyone who’s tried to beat the record has died horribly from losing control of their boat.

Cy Young, with over 500 wins as a major league pitcher.

Active leader is verlander with 226.

Largest percentage of humanity slept with. Probably belongs to Genghis Khan. Unless Adam and Eve are to be considered historical figures lol

John Stockton assists and steals record. John Stockton has 15,806 assists which is 3,715 more assists than the next guy on the list. He also has 3,265 steals which is 581 steals ahead of 2nd place.

The current active steals leader is Chris Paul who has 2,002 steals, he would have to average 100 plus steals a season for the next 12 seasons to come close to breaking that record.

The only way a guy is getting to even 80 points again is if it’s in the flow of the game and the game is undecided. We’ve seen Steve Kerr shut down his players once they reach certain scoring milestones, but mainly because the games are out of reach and he doesn’t want anyone getting hurt intentionally. Even Kobe got shut down for a fourth quarter after scoring 62 through three quarters.

That being said, scoring 100 points in a game is the only realistic record of his that can be matched/broken. Nobody is averaging 50 points per game, 27 rebounds per game, 48.5 minutes per game, etc.

I have to say that I agree with most of these.

What would you add to the list? Do it in the comments!