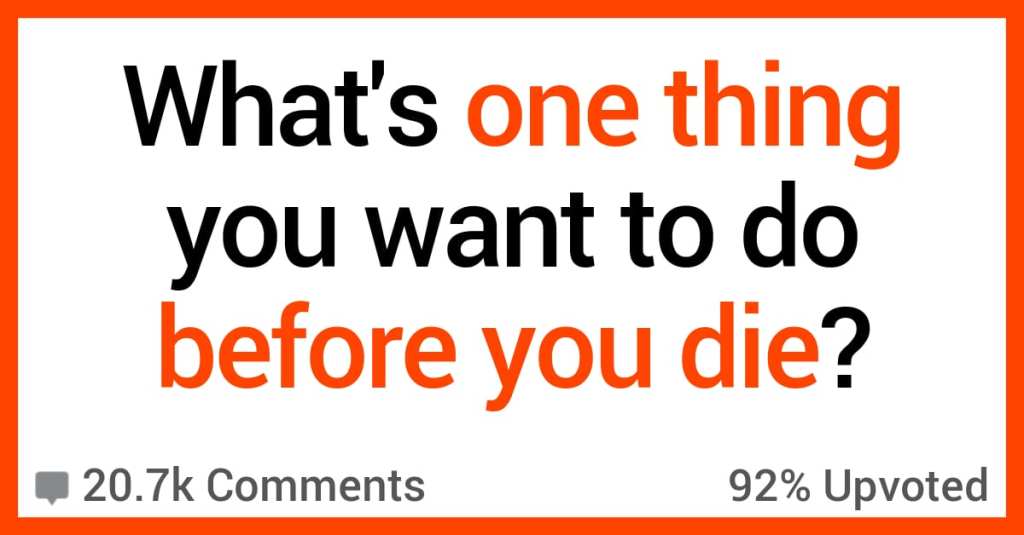 We’ve all got those desires, tucked away in our hearts – those things we hold close and tight, that we hope we’ll be able to do before our lives are over for good.

Sometimes we share them and sometimes we don’t, and today, these 18 people are confessing those things they really want to do before they’re gone.

18. Drinking gets harder with age, so godspeed.

Look, most people in my family live to their late eighties to early nineties and I take pretty good care of myself now so unless something horrible happens I think I’ll still be alive at 80.

Drink gasoline so the cremation will cause a problem.

Have at least one real boyfriend, for me.

See the end of One Piece.

I want to travel to Hungary. It’s where my grandfather is from. He’s 90 now, and came to the US as a young man. I’d love to see the land he grew up in.

I want to go sit in a chair on an empty beach, alone, and spend a few hours drinking my favorite whiskey and watching the sunset.

All by myself, no phone, no one else around. Just watch the tide as the sun fades over the horizon.

This might be stupid, but I really want to make good on childhood me’s dream of becoming a game dev, or at least voice act in a video game.

Leave some sort of positive change in the world.

Tomorrow do a good deed and you’ve completed your wish.

We all strive for greatness but greatness is so hard to achieve, instead start small and see what unveils itself.

Buy someone a coffee next time you go to the drive through, you never know what kind of day they’ve had. Pay a coworker a compliment

Every tiny action has the possibility to snowball into a tremendous act and if we don’t take those tiny chances we will never know the greatness we are capable of. And even if we never achieve greatness in a singular action, the culmination of our small gestures may just amount to greatness.

Swim with a blue whale.

I have this goal of becoming a millionaire so I can help every poor/struggling person I know.

I have family in Yemen now and they’re barely surviving. It gets depressing the more I think of it. I want to change at least one person’s life.

I used to want to set foot on all seven continents but since my husband died I don’t care anymore.

I got three under my belt and the money slated for the two of us going to number four (Africa) went to his cancer treatments.

Number seven was going to be Antarctica and the real crowning achievement.

My dream is to fall in love and get married but it seems like that’s too lofty a goal.

I did it already. I saved my wife’s life over 20 times due to self inflicted wounds and massive overdosing on meds. She eventually overdosed to the point where she had permanent brain damage and was in a persistent vegetative state for three years.

She was extremely afflicted with bipolar disorder and was an alcoholic due to a lot of abuse during life. I took care of her hand and foot for 3 years, 24 hours a day, 7 days a week and never left her side and never left the house.

We were married 26 years and i wanted her to know that she was loved until the day she died.

I accomplished what I was put on this Earth to do and can now pass if need be myself, happy

1. This one surprised me.

I’d like to do heroin on my deathbed tbh.

If people are willing to essentially throw their life away for it I’ll be damned if I don’t give it a shot at the end.

I hope everyone on this list accomplishes every hope they have – silly or big!