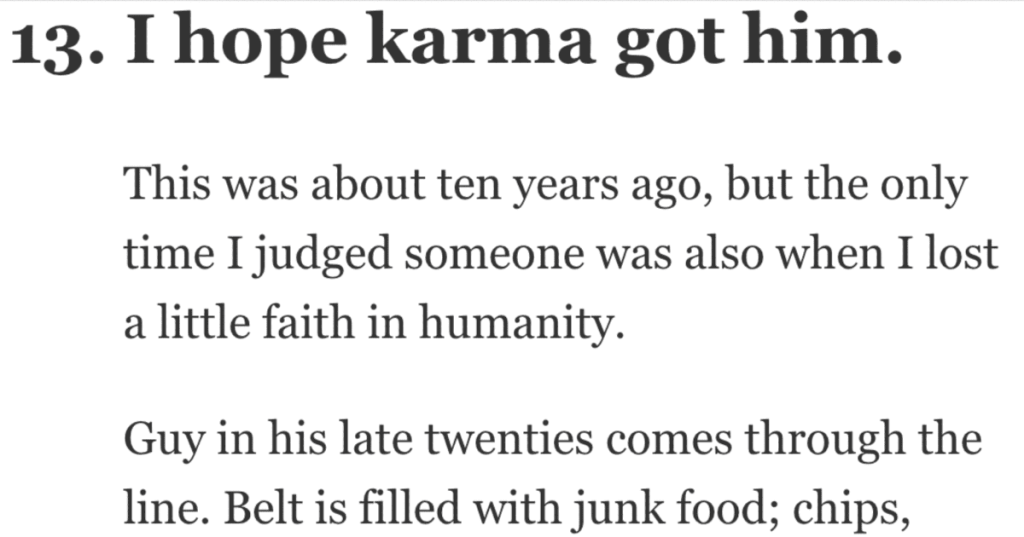 Every job in the world has its upsides and downsides. There are good and bad things about every career and line of work, and depending on your personality, the ability to laugh at others could fall into either category.

If you’ve ever spent all day ringing up people’s purchases, though, you know there are some things that make your eyes roll (if only in your head – and these 18 cashiers are here to confess theirs.

I work in an art supply store. I don’t judge customers for their purchases. I do sometimes judge the over involved parents of college freshmen, the instructors at the local watercolor society who claim their students must buy the single most expensive watercolor brand we sell, and the people who ask if there are any professional artists with degrees who can answer their questions.

17. Part of the job description.

When I worked at the liquor store we only judged people if they came back several times a day.

Edit: I only did this because it was illegal to sell alcohol to drunk people, when you have someone making multiple trips during a shift they may be drunk, whether or not they where an alcoholic wasn’t my concern, but yes I had to judge them.

Not judged as much as hated when people bought dozens of those individually wrapped snack sized cheese slices. At my store we had to scan each one of them.

worked at a grocery store. drunk people sometimes came in trying to buy more beer. one guy was too drunk and the manager had to send him home. he kept rambling about he was a preacher or something.

Currently working as a cashier and I was reading thru these thinking “what was something I really judged people for?”

Then I remembered this one customer I judged wrongly. Every morning this one guy would bolt into the store, go to the drink aisle, and come out with 5-6 energy drinks. He would come everyday so one day, I made a joke and said: “don’t drink them all in one setting.”

He then proceeded to tell me that it’s to help with his ongoing chemo therapy. Stopped judging people based on their items after that one.

This was about ten years ago, but the only time I judged someone was also when I lost a little faith in humanity.

Guy in his late twenties comes through the line. Belt is filled with junk food; chips, chocolate, popcorn, candy, etc. The whole time I’m ringing him up he’s saying how glad he is to be out of the house, that the baby has a flu or something and he’s at his wits end.

I get to the total, tell him, and wouldn’t you know, he’s short a few dollars. So what does he put back? The only non-junk food item: children’s cold and flu medicine.

I still judge that man, and I don’t even remember his face.

I was in a 7-11 at 1:30 in the morning on a Tuesday I had the next day off, and a plan to to hang around my apartment all day and play video games. But in order to avoid going out again, I was gonna need some beer. I headed up to the counter with that beer, and there was someone in line.

The lady in front of me had 3 kids with her. They were all in between about in between about 4 and 7.. And they each had had a single serving box of sugary cereal. Like the little boxes of fruit loops. And the mom was buying a pint of milk. Not a half gallon, or a quart… just a pint.

I’m pretending not to notice her, thinking what are these kids doing up at 1:30 in the morning? And 3 single serving cereals and a pint of milk? You could just get a Box of cereal and a gallon of milk for like an extra couple of bucks. And anyways, that’s not enough milk to fulfil the goal.

What blew me away, is she paid for it all with a crisp new $100 bill. And then told the cashier to give her all the change in scratch tickets. The combination of all of those bad decisions Amazed me.

back when i worked nights at a gas station, i had a lady come in wanting a sale that had ended the previous week. when i refused to give it to her she did the whole “DO YOU KNOW WHO I AM?!” bit, and swore her uncle owned the gas station chain and was going to have me fired.

i really didn’t give a damn. i made $12/hour. i told her go for it. then kicked her out. talked to my boss the next day who was a little peeved i didnt give her the discount but said i did the right thing by kicking her out because she doesn’t tolerate customers being rude to her staff. never did find out if she really was the niece of the gas station owner, and never got fired. quit a year later for a better paying job.

I was a cashier at a pet store. The main thing i’d judge for was buying way to small of a habitat. Whether it was a gold fish bowl, or a critter trail, i’d be upset.

I’d try to use it as a teaching opprotunity when possible but not everyone would listen because “its just a fish/hamster/rabbit/etc”.

Nothing. Absolutely nothing. I barely pay attention to what im scanning most of the time. You could point a loaded gun at me and leave a note saying you’re gonna rob me.

So long as I swipe it through and hear a beep, I won’t even flinch.

Absolutely nothing. Someone could buy garbage bags, paper towels, a chainsaw, and bleach then use a severed head as their coin purse and I would still say “Another scorcher!”

I worked as a grocery store cashier many years ago when I was in college. I saw lots of weird stuff, but never judged what people bought, but did judge them if they were assholes. Even people on wic and foodstamps buying beer or steaks didn’t bother me – sometimes you have to enjoy the little things, and who am I to deny or judge someone wanting a small enjoyment if their life is already rough enough to need welfare?

But there was this one time that was freaking hilarious. Late on a weekend night, a really trashy couple were all over each other as they bought a 12 pack of beer and a box of condoms. Hey, at least they were being responsible. But the funniest part was when they came back not 30 minutes later and bought smokes and a douche. I still laugh thinking about that.

6. Depressing as all get out.

Literally the only thing that ever stood out to me was people late at night buying 6+ bottles of non-mint mouthwash.

Absolutely 100% of the time they were drinking it.

Not in itself, but I always side eye parents who’ll buy my weight in booze and cigarettes, but then scream at their kid to put the bottle of juice back.

4. She’s going through something.

It’s hard for me to judge any item cause most are pretty tame/ fitting for the person however I do have this one regular… this regular lady comes in multiple times a day and always gets a small bottle of alcohol (like Southern Comfort or Fireball) and she ALWAYS tells me, “I’m marinating chicken, I don’t drink” or other times she tells me, “they are for my husband” and then later in the day she tells me, “I’m so lonely without my husband.”

I know she might be going through some stuff but I always think to myself, “I honestly don’t care lady, as long as you pay for it”.

I used to work at an adult toy store. I remember when i first started it was a little weird for EVERYTHING that was brought up to the check out. I got into the habit of picking up every item and looking directly at the code number on the sticker, never actually looking at the item itself.

then one day the store was empty. This guy comes in – looked like a caricature of a nerd/programmer – walked in fast, went through the store like he had studied the layout of every shelf, b-lined to exactly what he wanted, made his way to the counter and plopped it down – it was a butt plug that I swear was as big around as my head.

after that incident I wasn’t bothered by anything brought up to the register.

1. The struggle is real.

I bought toilet paper and laxatives at the same time. Teenage cashier looked at it and got the giggles.

This got the bagger laughing. I just stood there stupidly pretending it wasn’t funny.

I mean, these totally make sense if you think about it.

Are you a cashier? If so, let us know in the comments what else you would put on this list!