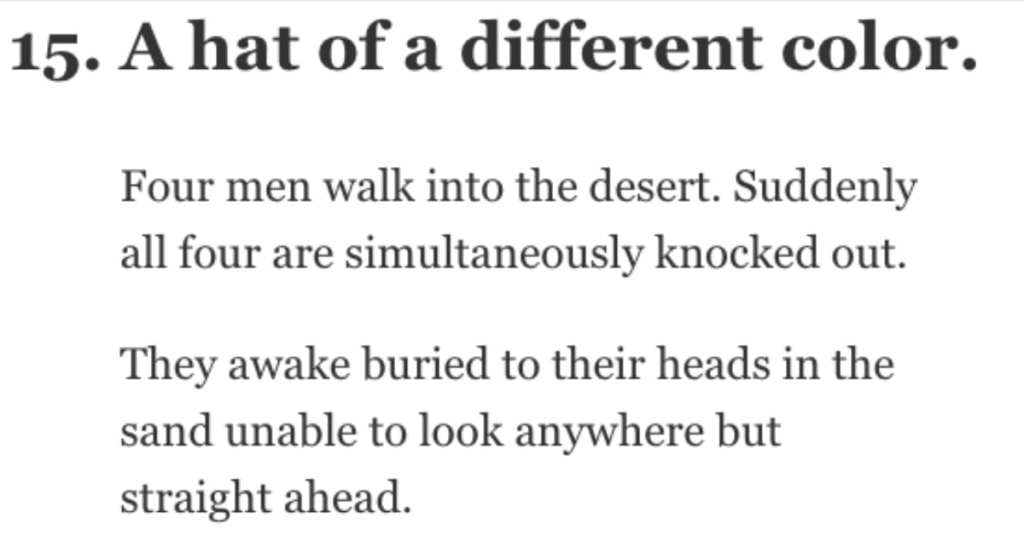 Most people I know love a good riddle, but if you go searching for them on the internet, you don’t always find the cream of the crop on the first try.

There are thousands of riddles out there, of course, and most of them are good for at least a second or two of head-scratching.

If you’re looking for some that could become favorites to tell over and over, though, these 18 people think they have you covered.

I breathe, yet am not alive, My licks are never those of love, The more you feed me, the hungrier I become.

There exists a word with L in the middle, in the beginning, and at the end. Yet the word only has 1 L.

Four men walk into the desert. Suddenly all four are simultaneously knocked out.

They awake buried to their heads in the sand unable to look anywhere but straight ahead.

The third man sees another’s head and a wall.

However, if any of them can guess the color of their cap on the first try they can all go free. The captors tell them that there are two blue caps and two white caps.

After a minute, the third man says his hat correctly and they are all free. How did he know?

Answer: If the last man saw 2 blues or 2 whites, he would know his colour and would have said it immediately. However, since he did not say, he is unsure because he saw 1 blue and 1 white.

The 3rd man now knows about this after sometime. If the 3rd man sees white, then he will know his is blue, and vice versa.

And one that makes one shudder,

Whenever it is heard.

It mayn’t be very wicked;

It must be always bad,

And speaks of sin and suffering,

Enough to make one mad.

They say it is a compound word,

And that is very true;

And then they decompose it,

Which, of course, they’re free to do.

If, of the dozen letters,

We take off the first three,

We have the nine remaining,

As sad as they can be;

For though it seems to make it less,

In fact it makes it more,

For it takes the brute creation in,

Which was left out before.

It’s possible we may,

If only we divide it,

In some new-fashioned way.

Instead of three and nine, then,

Let’s make it four and eight,

You’ll say it makes no difference,

At least not very great;

But only see the consequence!

That’s all that need be done,

To change this mass of sadness,

It clears off swords and pistols,

And all the horrid weapons,

By which men lose their lives.

And now joyfully is heard,

The native sound of gladness,

Compressed into one word!

Yes! Four and eight, my friends!

Let that be yours and mine,

Though all the hosts of demons,

Rejoice in three and nine.

Rich people need it, Poor people have it, And if you eat it you will die.

What has four wheels and flies?

Three guests check into a hotel room. The manager says the bill is $30, so each guest pays $10. Later the manager realizes the bill should only have been $25. To rectify this, he gives the bellhop $5 as five one-dollar bills to return to the guests.

On the way to the guests’ room to refund the money, the bellhop realizes that he cannot equally divide the five one-dollar bills among the three guests. As the guests aren’t aware of the total of the revised bill, the bellhop decides to just give each guest $1 back and keep $2 as a tip for himself, and proceeds to do so.

James went skydiving by his house in Utah and, as a result, saved the life of his brother, Jeff. Strangely, Jeff lived in Delaware, and hadn’t spoken to his brother James in years.

You must get EXACTLY four gallons in one of the buckets, or you will be executed. You have no other way of measuring the water, and no other tools, aside from the two buckets.

How do you achieve precisely 4 gallons?

8. My grandpa’s favorite, too.

One of them is not a Nickel. What are the 2 coins?

Answer: A Quarter and a Nickel. One of them is not a Nickel, the other one is!

A farmer has a stray dog, a chicken, and a bag of grain he’s taking to his farm. He gets to the river he needs to cross to get to the farm, but his canoe will only fit one item other than himself.

How does he get everything across the river?

Go back and bring the dog over.

On the way back take the chicken with you leaving the dog in the right side.

Leave the chicken on the wrong side and take the grain back to the right side.

Then leave the grain with the dog and go back to get the chicken. Or just train your animals

What’s a thing that’s large and round,
Oft mistaken for a hound,
Known distinctly throughout town,
For the the stench emitted from its mound?

What is the smallest amount of helpers you need to safely cross (and have everyone survive) and how do you do it?

Answer: you need 2 helpers. After the first day you send 1 helper back with 1 supply of rations, the other 2 are divided between you and the other helper. Now you both have 4 days worth of rations.

The next day you send the 2nd helper back with 2 days of rations, taking the 3rd one yourself. You now have 4 days worth of rations for the remaining 4 days.

what would you ask them?

Answer: I want to be free, which door would the other person show me? Then pick the other door.

3. Everyone loves to anger their friends.

A group of people with assorted eye colors live on an island. They are all perfect logicians — if a conclusion can be logically deduced, they will do it instantly. No one knows the color of their eyes. Every night at midnight, a ferry stops at the island. Any islanders who have figured out the color of their own eyes then leave the island, and the rest stay. Everyone can see everyone else at all times and keeps a count of the number of people they see with each eye color (excluding themselves), but they cannot otherwise communicate. Everyone on the island knows all the rules in this paragraph.

On this island there are 100 blue-eyed people, 100 brown-eyed people, and the Guru (she happens to have green eyes). So any given blue-eyed person can see 100 people with brown eyes and 99 people with blue eyes (and one with green), but that does not tell him his own eye color; as far as he knows the totals could be 101 brown and 99 blue. Or 100 brown, 99 blue, and he could have red eyes.

The Guru is allowed to speak once (let’s say at noon), on one day in all their endless years on the island. Standing before the islanders, she says the following:
“I can see someone who has blue eyes.”

Who leaves the island, and on what night?

Who leaves the island? All of the blue-eyed islanders

Two fathers and two sons went fishing. They each brought back a fish, but there are only three fish.

How is this possible?

A grandfather, a father and a son.

Father is both a father AND a son. So four titles for three people.

A man who is mute decides to take a train to visit his cousin for the day. At the station, he sees that a round trip ticket is $1 while a one way ticket is 50 cents. Without signing with his hands, nor pointing at the price sign, he gives a dollar to the teller, who gives him a round trip ticket.

How did the teller know he wanted a round trip ticket, and not a one way with 50 cents change?

Answer: He paid with coins such that 50c was a subset of the coins (ie in the UK, it’d be two 50p pieces, maybe he paid in your country with four 20c and two 10c coins).

The teller can see that if he’d wanted one-way, he could have handed over just some fo the coins and no change would be needed.

There are definitely some gems in this heap, don’t you think?

What’s your favorite riddle? Tell it to us in the comments!