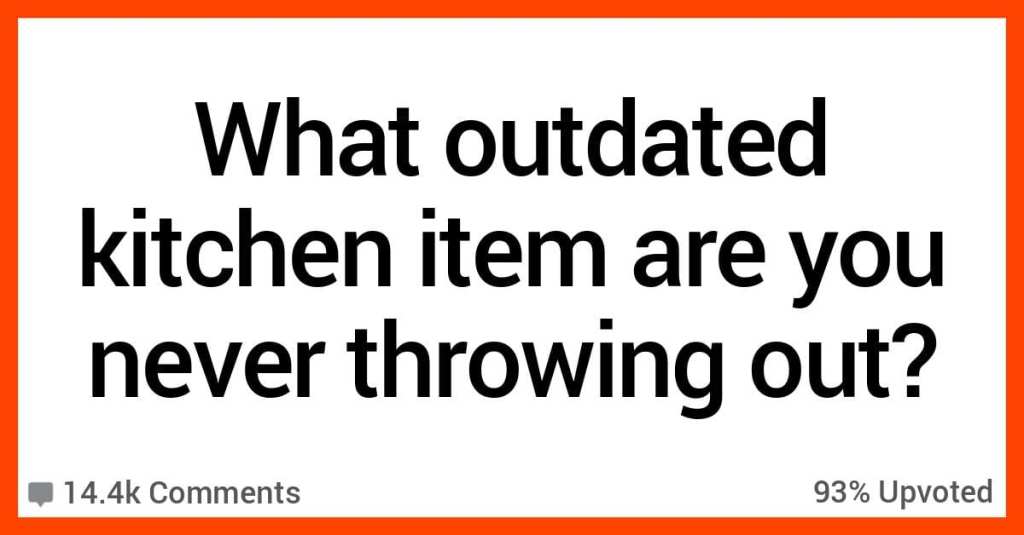 18 Kitchen Items People Are Never, Ever Giving Up

If you’re someone who enjoys baking or cooking – or even if you don’t enjoy it, but the task often falls to you – it’s likely you have some favorite spices, recipes, and implements. When it comes to the latter, they may be new and fancy, or they might be handed down through generations.

These 18 people have things in their kitchen you definitely would have trouble buying in a store, so they’re definitely never throwing them out.

It’s the same age as I am, gets carpet and floors cleaner than any new vac I’ve tried, uses disposable bags that are easy and clean to change, everything important is METAL, not shit plastic, hell I’ve used it to blow leaves off of my deck with the blower opening on it.

Self-retracting cord, heavy, pretty quiet, I’m going to use it until it dies, then have it rebuilt and use it some more.

17. Who doesn’t love the clicking noises?

16. I’m cringing at the thought of that crashing and dying.

I’ve got about 7,000 songs uploaded and about 3,000 of those songs were uploaded from CDS that I’ve owned from with span of about 15 years.

I still use the clock/radio/alarm that my mom got me in 8th grade because I kept sleeping in.

I’m 37 and it’s still the only alarm obnoxious enough to reliably wake me up.

14. Gotta have something to hang on the walls.

Still love printing photos out, especially of my daughter.

I want to hold on to them and treasure them for as long as I’m alive and one day look back on them with her.

A treadle sewing machine from the 50s

It’s the most trustworthy thing I own and so simple in design it’s easy to fix if something happens to it. Electric machines are too complicated for their own good

The PS2 is pretty old now, but I still think it’s brilliant. It had so many games, including one of my personal favourite PS2 games in The Simpsons Hit & Run.

d even go so far as to say that the PS2 is probably the best console ever made. The only one I can think of that can measure up is the SNES.

It also had almost complete backwards compatibility with PS1 stuff, including the ability to read PS1 memory cards. So you could basically play any game from both the PS1 and PS2 eras on the PS2.

Measuring spoons my Mom gave me when I went to college.

Pre-war Singer sewing machine. Got from a flea market, the only modern part is a small electric motor I installed on it.

I’m also pretty sure that thing could survive atmospheric re-entry.

8. It just lands in your brain differently.

I prefer taking notes on a paper pad and a uniball pen.

I can type over 100wps; it just sticks in my head better when I write it. Plus, there’s something cathartic about doodling in the margins when there’s no substance to what’s being said.

Alarm clock. I figure most people just use the alarm on their phone and set it next to their pillow, but I like having one across the room.

I can just look up at night and see the time and I have to physically get up and turn the alarm off, so I never worry about oversleeping.

I write thoughts down as they come to mind, and stick these things on the walls, on my car’s dashboard, on the fridge, on my six year old son, etc.

I use and collect fountain pens since I was younger(25now). , and I never enjoy using other writing utensils.

Something about writing with fountain pens are so enjoyable for me that convenience doesn’t matter.

My Nintendo DS Lite. There’s nothing wrong with the Switch of course.

People have used emulators to play the older Pokemon games but it doesn’t feel the same as holding the console.

3. A physical planner is the only way to go.

An actual calendar / planner…I don’t know why I just don’t feel like typing shit out on my smartphone, I’m just so used to decades of using planners to write down when I work, what I have to do, birthdays, vacations, events, etc.

2. Just your own two hands.

Not using a breadmaker or mixer with a dough hook for bread. The most high tech item I use is a spatula for the first bit then it is all by hand.

I love baking bread and I’ve done 2 batches a week for years now.

I have a few things I would have to hold a funeral for if they were broken, that’s for sure!

What’s your favorite kitchen item that’s the definition of “older is better?” Tell us about it in the comments!