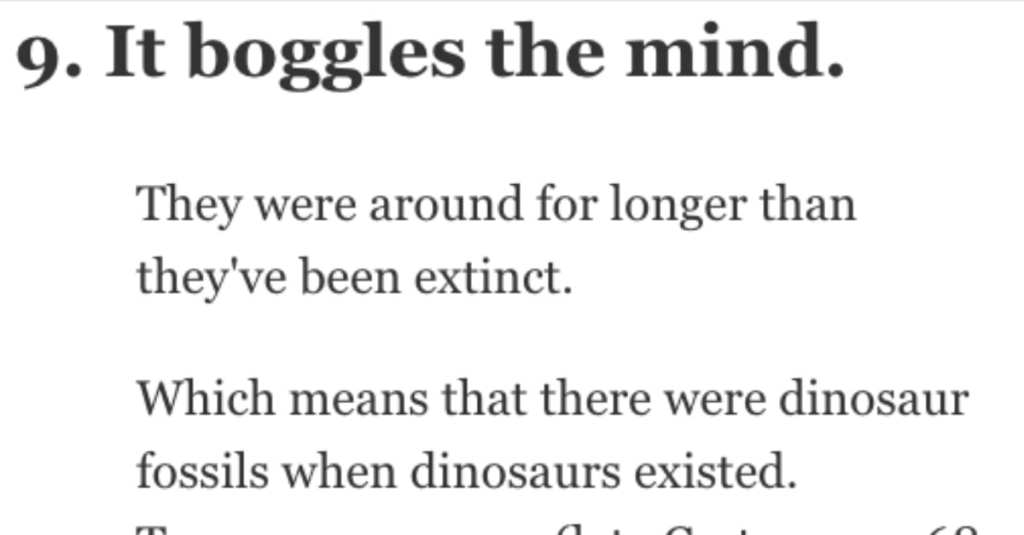 Kids who grow up obsessed with dinosaurs never loser their interest in the far-off past. If you need proof of this statement, just look at the popularity of the enduring (and still going) Jurassic Park franchise!

For some reason it’s not “cool” for adults to love talking about dinosaurs, but I say it’s about time to change all of that – and these 18 people know some amazing facts you’re not going to want to miss.

We have not even begun to scratch the surface of how many dinosaurs there actually were. We are finding new species as often as every 2 weeks (I imagine this is not true at the moment with corona going on right now).

I saw a movie at the Field Museum and I believe it said that we have only discovered 2% of all dinosaurs that have ever walked on earth. This was years ago so I imagine that number is different now but it’s crazy to think about just how long they were actually living on our planet. 165 millions years is a crazy number to wrap your brain around.

Scientists have studied the nasal and throat structure of the tyrannosaurus rex and as it turns out it was completely incapable of vocalizing a roar like those seen in movies, rather they would have made deep growling noises similar to alligators.

16. I actually love how dorky this is.

Since the coining of the name it has been determined that they are not lizards.

The name still fits though, because they make for terrible lizards.

Raptors couldn’t walk around with its hands hanging palm down like most toys and movies show, their bone structure wouldn’t allow it. They had to keep their palms facing each other.

Velociraptors are a lot smaller than depicted in movies.

An actual velociraptor was more like a turkey with attitude: around the size of a Thanksgiving roaster with feathers, teeth, and claws.

In one of his strips, a caveman scientist described the spikes on a stegosaurus tail as “the thagomizer, named after the late Thag Simmons”.

Real life paleontologists realized this part had no name… so they started calling it the thagomizer.

Many know dinosaurs likely had feathers also known as dino fuzz. However, now many scientists are discovering that the feathers on many dinosaurs have likely been overdone as a result of the feather craze. View the video below on the most up-to-date version of a T-rex. 🙂

11. I’m picturing a tiny tail but I’m sure that’s not right.

Recently spinosaurus was discovered to have a tadpole-like tail. It has been known for a while that it was mostly an aquatic animal, even Jurassic Park III showed that, but it was always depicted with the standard lizard-like dinosaur tail.

Recently new fossils have emerged that show that the creature had a tail like that of a tad pole, suggesting that it spend much more time in water than previously thought.

It is in fact more evident that spinosaurus was incapable of pursuing animals underwater as do crocodiles, and more evidence based on their morphology points towards it being a wader, like a heron, sitting and waiting for fish to pass by and snapping at them. This “tappole” tail could therefore be attributed to sexual displays or something we don’t know of yet.

There is a Dinosaur named Yi Qi from the limestone deposits in China that has the exact same body plan as a Wyvern Dragon, complete with bat-like Wings and proves that flight evolved more than once in dinosaurs

They were around for longer than they’ve been extinct.

Which means that there were dinosaur fossils when dinosaurs existed. Tyrannosaurus rex (late Cretaceous, 68 mya) lived closer in time to us than to Stegosaurus (late Jurassic, 150 mya)

There was an ultra rare skeleton of a dinosaur called spinosaurus that was the only one of its kind (not complete, but only evidence of it) and it got destroyed during ww2 when bombs fell on the museum in Germany.

Only recently another intact skeleton has been found in North Africa. Which was more complete and gave some clues about where it lived and how it got so big( it was bigger than a T. rex )

There was a study done a few years ago where scientists grew chicken embryos that had dinosaur faces – a rounded snout and teeth instead of a beak. They did this by altering gene expression in the developing embryos, so the snouts came out looking more like an alligator’s than a traditional bird’s.

Also, birds actually existed at the same time as non-avian dinosaurs. Archaeopteryx was a Jurassic dinosaur, so the evolution of birds began long before velociraptors and T. Rex were walking the earth. Edit for clarification: they may not have been true birds as we know them today, but the avian dinosaurs branched off from non-avian dinosaurs well before the K-T extinxtion event that killed the non-avian dinosaurs, and continued their evolution into what we know as modern birds.

Finally, there’s a weird bird in the Amazon called the Hoatzin, and it’s notable because the chicks have 2 claws on their wings. These allow the chicks to climb trees until their wings are strong enough for actual flight; by adulthood the claws disappear. These birds are the last surviving members of a bird line that branched off from other avian species 64 million years ago, just after the non-avian dinosaurs were wiped out. They’re basically just really weird dinosaur birds that are very stinky and have gross tasting meat because they have a weird digestive tract.

6. It’s going to take a minute to process this.

In fact, Dimetrodon is a synapsid and is more closely related to humans than to dinosaurs.

The Amish don’t believe in dinosaurs.

There are other christian cults that believe that the world was only created about 4000 years ago. They believe that there never were dinosaurs, just fossils created by god.

4. Where are the babies?

It’s thought that they died suddenly while in combat due to getting buried in a landslide of sand, caused by a rare torrential downpour. Real-life Velociraptors may be small, but they’re still metal as hell.

Dinosaurs such as T. Rex could produce infrasonic waves.

You’d basically feel in your spine.

T. Rex was actually really tough. Some skeletons have been found with major injuries that show evidence of years worth of healing.

A skeleton named Stan in particular had a hole in his skull, and he may have lived up to a decade after having his skull punctured if the bone healing is any indication.

Like Sue, one of the largest female T. Rex skeletons we have. One of her femurs is gigantic and misshapen due to an infection, she had a dead, hanging arm due to a torn bicep, had broken ribs on both sides of her chest, broken at 2 different times based on research how they healed, and had holes in her jaw due to germs. Her skeleton was difficult to put up because her tail bones were fused together due to arthritis.

These animals ran on pure hatred which undoubtedly fueled their survival drive. However, the severity of T. Rex injuries which they survived hints that they could’ve lived in pairs or small groups and they actually cared for each other ensuring their survival.

They were long considered to be solitary hunters that would rather feast on dead carcasses than hunt, but their injuries seem to point to the fact that they were active hunters. 15 years ago a family of 6 tyrannosaurids ranging from juvenile to adult was found in a mass grave suggesting they died together as a family.

I’m so happy all of these live in my head now.