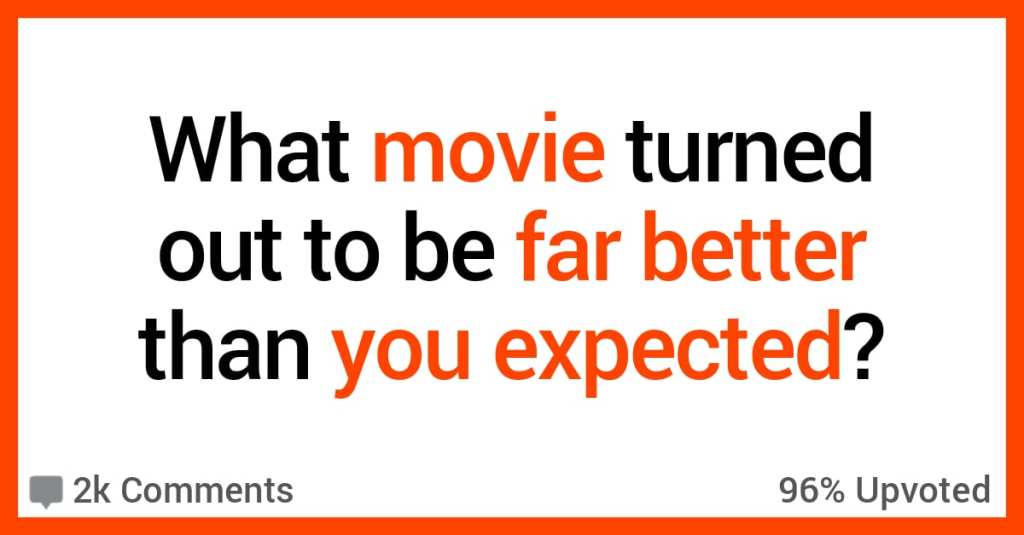 Here are 18 times people clicked on a movie thinking it was going to be somewhere between bad and laughably awful, only to be surprised when the flick turned out to be great, instead.

18. If you want to get your heartrate up.

It’s not gonna win any Academy Awards, but that movie is a masterpiece of over the top action and you will not be bored the entire time.

Also features Dwight Yoakam and a score by Mike Patton.

I thought it was gonna be the normal cringe superhero movie but it was actually just super funny! actually funny, not cringe funny!

16. This movie is a masterpiece.

For some reason, I thought Knives Out was gonna be just another lame movie with famous ensemble cast but I liked it way more than I expected.

I thought this movie was targeted to old, boring people. Turns out to be a great movie that lots of people can enjoy.

Clue. A movie about a board game? What? And it’s a comedy?

14. Epic is an excellent way to describe it.

Cabin In the Woods.

Expected a lame cookie-cutter slasher flick. Got something way more epic and fun.

I saw this movie without seeing any trailers for the film, I had no idea it was going to be satirical and genuinely thought that was the moment I lost touch with modern Hollywood antics.

13. And you’ll never get that song out of your head.

I thought “Oh this is just one of those movies for a product. I mean Batman and Superman on the poster, this screams paid product. I just hope the marketing isn’t crazy”. My god was I wrong.

The Lego Movie is now in my top 20 animated movies and I did not expect that movie to be that amazing. It proved to me that all those paid product movies don’t have any excuses to be as bad as they are.

Alexander and the Terrible, Horrible, No Good, Very Bad Day – my kids picked this for movie night recently on Disney+.

I was expecting your standard, non-reboot, modern Disney movie, kids think it’s hilarious and everyone else cringes the entire time.

In reality, it was f*cking hysterical from beginning to end and I’m looking forward to watching it again.

11. Southerners are people too.

Tucker and Dale Versus Evil.

As a southerner with a lot of Appalachian hillbilly friends/family, I love this movie for how it finally treats southerners as normal people, as opposed to the crazy, malformed, cannibalistic and/or r*pist hermits that are usually in horror films.

Cause, y’know, poor/uneducated folk are scary.

Spiderman: Into the Spiderverse.

I was expecting a corny kids version of a marvel movie. Entertaining but no substance.

Well I was blown away, probably had the most fun in a movie that I can remember with that one. And I think that’s a movie meant to be watched on a big screen.

The Edge of Tomorrow.

I thought it was going to be a stupid explosion movie since I’d never heard of it, turned out to be the one of the cleverest takes on the Sci-fi action genre I’ve seen.

But it’s actually a very nuanced, well-meaning movie that reaches out to any and everyone.

I didn’t expect that a film of such a great book could ever live up to it. I fully expected to be very disappointed. And then there was Robert DeNiro as a pirate.

Honestly ended up like the movie more than the book. They’re very different variations on the same story, and I like that the movie stayed true while also doing some of its own thing.

Michelle Pfeiffer as a wicked witch is f*cking amazing.

DeNiro is incredible, and Claire Danes took a character that could have been very one note and managed to fully invest me into a character whose not from this world and is very Fish out of Water.

Hunt for the Wilderpeople

I was not expecting it at all. I liked the trailer but I wasn’t feeling it to be honest.

I still decided to go watch it and I came out feeling like I enjoyed it thoroughly.

I had a good laugh and I actually thought it was well balanced with the actual plot.

5. He is a national treasure.

It has so many running gags, such as Po being blissfully unaware he’s adopted and every other character questioning why his Dad is a goose. Wonderful movies.

Po: I found out that my dad… isn’t really my dad.

Tigress: Your dad, the goose?

Tigress: [deadpan] That must have been quite a shock.

I saw it on TV at least 5 years after it was first released. I remembered rolling my eyes at the previews and being all cynical about it.

Turned out it was a magical musical journey full of laughter and learning. ~~~*

Keanu as a retired hitman getting revenge on the people who killed his dog? I mean, that sounds like the synopsis for a Ranier Wolfcastle movie.

Put it on during a hangover Sunday thinking it would be background noise while I napped.

There was no napping that day.

When I first saw the trailer, my friends and I just thought it was going to be along the lines of a Transformers movie (meaning well-below average in terms of quality) but it would be giant robots punching giant monsters.

And that was what the movie was, but the action is just done so well that it doesn’t matter that the premise of the movie is kind of stupid. You have a giant mech use a ship as a baseball bat to beat up a giant monster.

I’ve shown it to people who aren’t into sci-fi and took a lot of persuading.

They love it, every time.

Well, I guess I’m adding a few more movies to my to-watch list!

Have you seen any of these? Were they good? What other movie would you put on a list like this? Tell us down in the comments!