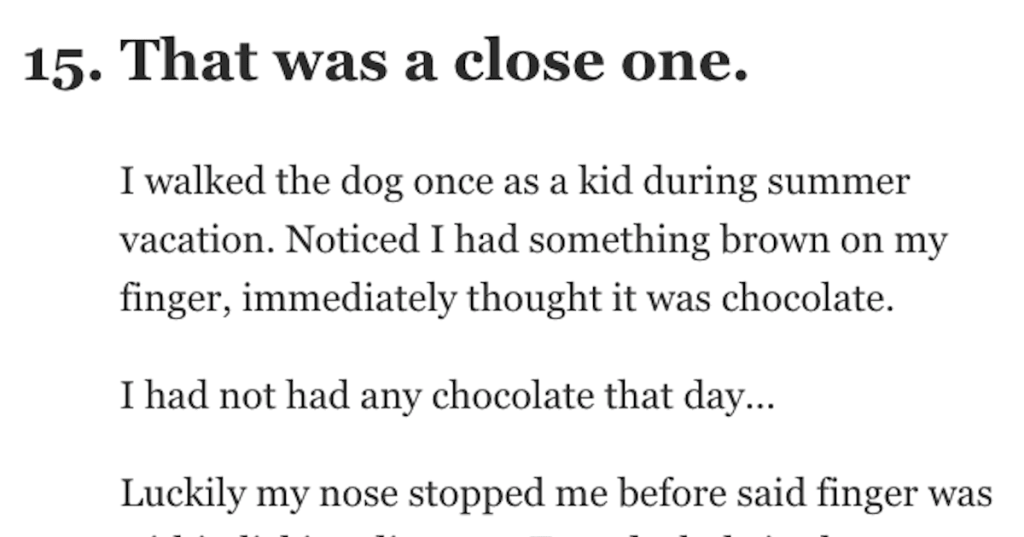 Have you ever put something in your mouth and immediately regretted it? Have you ever tried to spit it out, scrape your tongue, anything to make it stop?

These 20 people have, so take heed – they’re here to tell you what not to try yourself, no matter what!

A properly ripened persimmon, in my opinion, is really good – but one year around Christmas I got one that must have been under ripe or something because it tasted good for 0.02 seconds before the texture turned into literal sand and sucked every particle of moisture out of your mouth.

Literally the worst thing ever.

The glue they use on temporary dental crowns is extremely rude.

Couldn’t stop tasting that for days.

A BIRD S**T IN MY F*CKING MOUTH

I was lying on my back in a field and the thing flew by. It was a hit job. IT TASTED LIKE WARM BERRIES, I HATE THESE SKY RATS!

Some of you are picturing a nice berry dinner and don’t think it sounds too bad…these weren’t raspberries they were a**berries.

17. Sometimes you don’t want to know.

When I was super young—probably way too young to be going down to the lake near our house on my own—I came across this black thing on the ground. I couldn’t figure out what it was, but it looked like a delicious chestnut like the ones my mom would bring home in huge bags to both snack on and feed squirrels with.

So I did what any sensible pre-kindergartener would do, and took a bite. … It was not a chestnut.

To this day I can’t imagine what it was, but it was the absolute worst tasting thing I’ve ever put in my mouth.

I still remember crying as I was walking all the way back home, sure I’d been poisoned and was going to die.

One time I chewed on a gel advil.

It had some kind of liquid inside that numbed my mouth and my throat and I thought I was gonna die.

It was so bitter too.

I walked the dog once as a kid during summer vacation. Noticed I had something brown on my finger, immediately thought it was chocolate.

I had not had any chocolate that day…

Luckily my nose stopped me before said finger was within licking distance. Found a hole in the corner of the poop bag I was holding and swiftly realized that yes, I am in fact a f**king moron.

I don’t even remember how I got it in my mouth.

It got there. I vomited. And I tasted it for three days.

I made spaghetti once a few months back in the early fall, and I guess after the initial plates, I left it to cool uncovered so I could put the leftovers away.

So the next day my husband is enjoying some spaghetti for lunch when CRUNCH he bit into a stink bug that had landed in it. If you know how badly a stink bug smells, you can only imagine how bad it tastes.

My husband was projectile vomiting within five minutes and it’s been months and he won’t let me make spaghetti anymore because it reminds him of it. I cannot fathom how bad that must have tasted

This clear liquid medicine I had to take as a kid when I was diagnosed with a polio like disease called coxsackie.

The name is funny, I don’t even remember the effects, but that medicine legit tasted like battery acid or something.

From the holiday pack about 15 years ago.

When I was young my grandparents on my dads side spent every Christmas Eve at our house. It was great.

Except my Grandma’s contribution to the dinner. Which was an awful dish called Tomato Aspic. It is basically tomato juice Jello, and is every bit as awful as it sounds. The whole family hated it, but my grandma couldn’t cook, and did the best she could.

I remember being 10, and tried sneaking some to my dog that would eat everything from socks to dog poop.

He growled at me and bared his teeth.

If a dog that eats poop and licks his own butthole tells you to get that crap away from him, you dont eat it either.

Did not know about that one, but came here to say my worst was ranch dressing flavored soda.

Horrible. Smelled like moldy socks and tasted even worse.

It turns into this blob of horror that I cannot believe someone thought would be good. There are several videos where people make it and can’t even finish one bite.

7. Are you a powerful wizard now though?

Umbilical cord blood from a complete stranger. Not even lying, I use to be a paramedic and had to deliver a baby in the field once. I did everything exactly how I was taught in school and clamped the cord down and proceeded to cut it with my scalpel.

They neglected to teach us in school that the clamped part of the cord is still under pressure.

Blood squirted in my mouth, on my shirt and on my pants, so I basically had to suction a newborn baby and stimulate her while savoring the taste of the same nutrients that kept her alive the past 9 months.

To make matters worse, the mom wouldn’t name the baby after me.

6. Straight down the drain.

It was a drink I ordered from a bar in Singapore.

A shot of warm bourbon poured into a warm half pint of Murphy’s.

The temperature in Singapore as you can imagine is something akin to being in a hot oven all day all night all year round. Even breathing is difficult. As a tourist you get hot and thirsty.

I think that’s the only drink in my life I just said f**k it after one sip.. I ordered it, I’ll pay for it but bring me a cold water to get that s**t out of my mouth please. God damn

Once I popped some electrolyte/mineral pills in my mouth and started chomping away on my way to the gym.

I thought I had grabbed my almonds.

They began foaming and tasted extremely bitter and sour at the same time.

I thought I was getting poisoned.

Also once tried an olive straight off a tree. Also tasted like poison. Don’t recommend

4. I’m sure some people rave about it.

Don’t get me wrong – I love lemonade, and turmeric goes great in a lot of things.

A cheese ball at this church lady’s house (one of my grandma’s friends). It tasted like dirty socks that a cat had been playing with for months. But I have never laughed as hard as I did that day…

I (stupidly) asked my then 11-year-old sister (who is on the spectrum and thus has problems modulating her voice) if she had had a cheese ball. She proceeds to effectively yell:

The look of death we got from that old lady…

A guy puked in my mouth while I was intubating him.

A lightning bug (firefly). I was running through the garden at dusk and one flew into my mouth.

Well, I think I learned a few things today, how about you?

What’s the worst thing you’ve ever eaten? Share it with us in the comments!