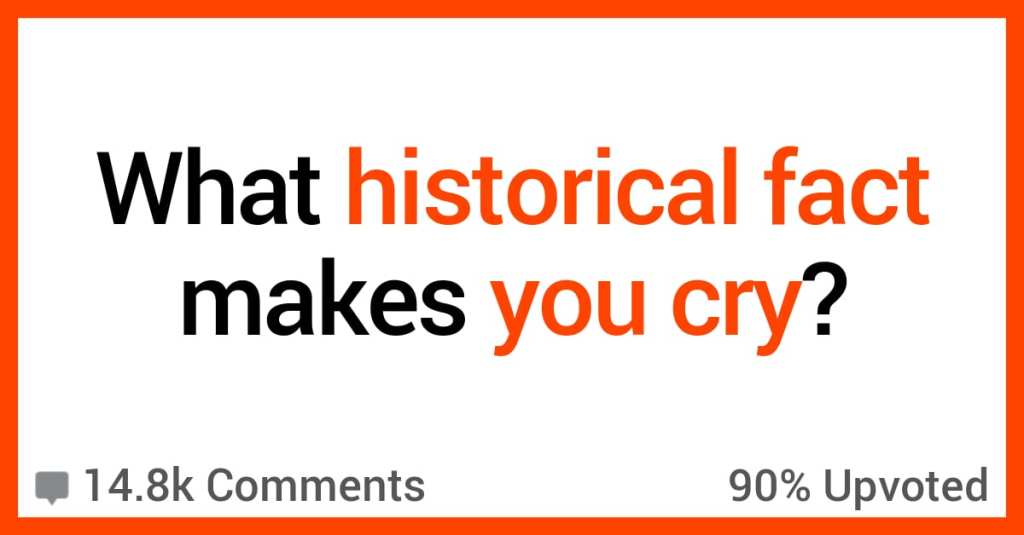 People Share the Historical Facts That Make Them Choke Up

History is full of great stories, and like all great stories, they can run the entire gamut from joyful and lovely, to completely devastating and sad.

Because human beings are complicated, you know?

These 14 facts, though, are of the variety that make people break down and weep, so gird your loins!

I am in tears, while carrying you to your last resting place as much as I rejoiced when bringing you home in my own hands fifteen years ago

My eyes were wet with tears, our little dog, when I bore thee (to the grave)… So, Patricus, never again shall thou give me a thousand kisses. Never canst thou be contentedly in my lap. In sadness have I buried thee, and thou deservist. In a resting place of marble, I have put thee for all time by the side of my shade. In thy qualities, sagacious thou wert like a human being. Ah, me! What a loved companion have we lost!

To Helena, foster child, soul without comparison and deserving of praise.

Three epitaphs written years ago in ancient rome by men and their dogs.

WW1- Mercy dogs, they would go out into no mans land and find wounded soldiers.

They would bring medical supplies for the soldiers to patch themselves up. Or if the soldier was to mortally wounded, stay and comfort them in their final moments.

Through genealogy, I found an old newspaper reporting an accident that happened:

That tugged at my heart. I cannot imagine the devastation he and his children felt as they were moving.

It’s quite a sad journey at times.

The end of a sappho poem:

Beyond all hope, I prayed those timeless days we spent might be made twice as long.

I prayed one word: I want.

Someone, I tell you, will remember us, even in another time.

That quote always make me tear up.

10. The worst time in history.

Dangerfield Newby, one of the free black men who died in the raid on Harper’s Ferry, had a letter from his enslaved wife on his person.

He had been working to buy her and his children, but her owner kept raising the price.

9. Do not Google this unless you truly want to know.

The torture and murder of Junko Furuta.

What they did to her would make the cartels cringe, but the worst part of her sordid case is that all of the people involved in her death were given slaps on the wrist and are roaming the streets of Japan today.

The Sand Creek massacre is particularly bad. They had so much faith in the peace treaties that had been signed, the signs of good faith from American settlers. Only to be massacred.

The leader of the camp, Black Kettle, desperately holding up the American flag he’d been given with a white flag underneath it, encouraging his people to gather around it- thinking that the settlers would realize they were allies and stop the killings. Only to be shot down.

The descriptions of the massacre are brutal- children tortured and slaughtered, pregnant women with their children torn out of their stomachs. Genitals torn from corpses and taken for trophies. It really made me realize you can never underestimate the cruelty of mankind.

Especially considering most of the murdered in this massacre were defenseless women, children, and elderly.

The oldest recorded name for a cat was from Ancient Egypt.

The cat’s name was “Nedjem” which means “Sweetie”.

6. He probably should have.

My grandfather was Kalispell, he was taken from his family, sent to “white” school and eventually adopted by a German family. He was about eight, his exact age was not known.

Breaks my heart every day. He was such a good and loving grandfather, and never held a grudge.

There’s no more wolves in Ireland.

They are coming back to Germany.

And there are already groups which want to kill them all again. And they are spreading panic:

There was a news story were a woman reported to be “attacked” by a “wolf wearing a collar”. It was a lost dog looking for help, which sniffed and licked her hand.

The story of Hachikō, the dog who waited patiently for his owner 9 years after his death.

I’m sure many are familiar with this story because of the movies and the episode of Futurama (Jurassic Bark) which was inspired by this story.

3. Because they had no choice of their own.

There were approximately 300 infants and children that were murdered in Jonestown, being forcibly fed or injected with cyanide.

I feel so much pain for all the victims but the kids in particular make me ache with despair.

In WWII an American pilot named Charles Brown was flying a B-17 in a bomb raid over Germany where his aircraft was severely shot up and entered a free fall when Brown passed out.

When Brown awoke, he was only a few thousand feet above the ground and barely was able to recover the aircraft. When the Luftwaffe spotted a limping B-17 far below the formation, they dispatched a pilot named Franz Stigler, a soon to be ace just 1 kill away, with 2 Downed B-17s earlier that day.

As he approached from the rear, Stigler noticed that the B-17s tail gunner didn’t move and after further inspection, realized he and several other gunners were dead. Stigler saw this and remembered what his flight instructor had said years ago,” if you shoot a man in a parachute, ill shoot you myself”.

Stigler saw this limping B-17 as no different from a downed pilot in a parachute. To prevent german flak cannons from taking it out, Stigler flew in formation with the B-17 all the way until the English Channel where it landed safely. Stigler never mentioned the incident, and could’ve been court martialled for it.

Decades later, Charles went looking for the enemy pilot that saved his life that fateful day, and eventually met him face to face, becoming close friends and dying just a few months apart from each other in 2008.

No one knew of his story until 50 years later when his wife found notebooks detailing the 669 kids he helped escape the Nazi’s.

Is anyone else choking up here?

Do you have a fact to add to this list? Share it with us in the comments!