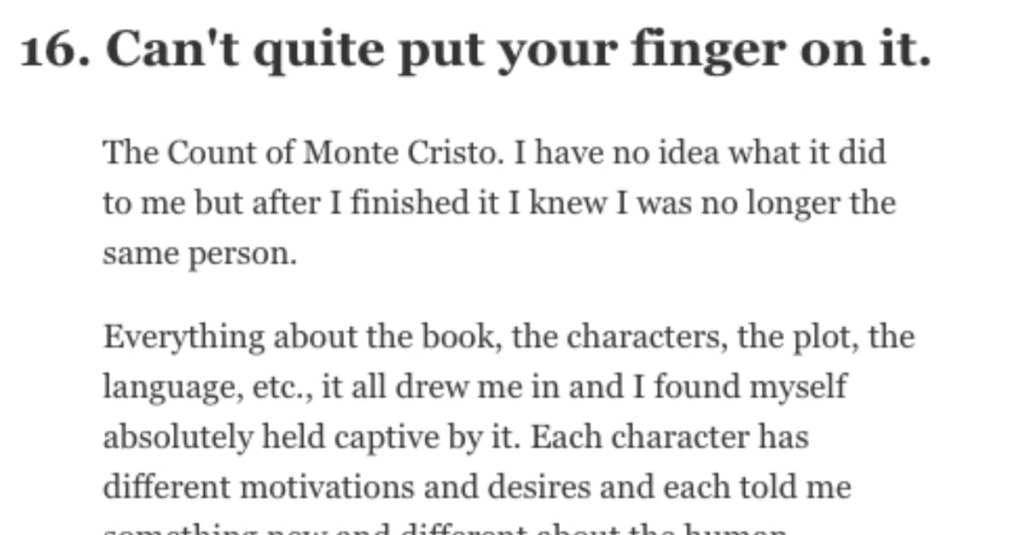 21 Books That Have Changed People’s Lives

If you’re a reader, there’s no doubt you have a short list of books that have completely changed your life.

A book that, after you read the final page, you knew you were never going to be quite the same person you had been before you read it.

Here’s a list of 21 reads that were that book for people, so get ready to add some more titles to your must read lists!

21. So many people love this book.

The pragmatism is real. It cuts through politics and religion like a hot knife through butter.

It’s like reading The Prince but applied to a very cool and original sci-fi world.

20. This book was fundamental for so many.

I read The Phantom Tollbooth at a young age & it changed the way I viewed the world.

One of my favorite quotes from the book: “So many things are possible just as long as you don’t know they’re impossible.”

That book left me feeling so incredibly icky. It made me realize I should probably be medicated.

I related way too hard to her frame of mind.

18. Anything that makes you think.

Crime and Punishment by Dostoevsky. Jeez, it’s such a weird-but-in-a-good-way book that really makes you reflect on morality.

Crime and Punishment was the book that made me really think, and realize that the difference between good and bad people largely comes down to circumstance.

If I had to choose one story specifically “The Cask of Amontillado”. It’s an unbelievable journey into vengeance and patience. Be good to people cause they hold grudges.

Another really fitting one for these times would be “The Pit and The Pendulum”. It shows the suffering an individual can endure merely because they are a member of a certain group.

The Count of Monte Cristo. I have no idea what it did to me but after I finished it I knew I was no longer the same person.

Everything about the book, the characters, the plot, the language, etc., it all drew me in and I found myself absolutely held captive by it. Each character has different motivations and desires and each told me something new and different about the human condition. They felt like real people to me in a way that I’ve never before experienced from any book (and I read A Lot) because it all just seemed so genuine.

I felt that not only could I deeply relate to many of them, but I could also envision versions of each of them in people who appear in my life and that I now understood those people better as a result. Almost before I knew it, I had read the whole thing and hungered for more which I knew would never come and could never come, not only because the author has been dead for a long, long time, but because the ending was so immensely perfect and well suited to the circumstances that I knew it was over.

And it has such a sense of rightness to it that I wasn’t even mad that I couldn’t read more tales of these characters. Somehow I just knew when I had finished the book that I wasn’t the same person because never before had so many different aspects of life been presented to me so clearly and endearingly. I feel I have a better understanding of human nature now as a result, as strange as that may seem.

In short, it’s a long ass book but so incredibly worth it, particularly if you have little to no knowledge of the plot and the characters. It’s simply a delight to read unawares and I truly wish that I had read it earlier in my life. But who knows, maybe it came at the time I needed it most.

Yo this year ruined all dystopia fiction for me. I used to love the genre but now it’s just reading fictionalized depictions of current events.

Still love me some aliens though…

until they show up next month probably.

The Shining made me realize I need to do something about my alcoholism.

The self sabotaging; the shitty marriage; the excuses…

Jack Torrence is a massive piece of shit and I was identifying with him.

Hitchhikers guide to the galaxy, made me completely perceive time and perspective differently.

After the first chapter, I decided I was going to law school.

11. Sometimes it catches you off guard.

The characters suffer from many many issues, physically, mentally, and emotionally, but they push through because their entire world is at stake, everything they know, love, and cherish could just vanish in an instant if they don’t fight for the right to live.

The quotes from the characters are also extremely good but there is just one sequence that just breaks me entirely.

Where The Red Fern Grows.

This was my favorite book as a kid. I remember reading it ten times one year.

Later on in 8th grade, we had to read it for class. On day one the teacher tells everyone the ending, robbing it of the impact. I couldn’t believe it.

The Lord of the Rings.

Tolkien really has a way of showing how it’s the little people that suffer at the hands of war. Frodo and Sam were ordinary farm folk that didn’t belong beside kings or fighting for great deeds but the world drug them into it anyway.

Just like Tolkien and his friends. But there is always a hope that never goes away and carries them through and shows that great evil isn’t held at bay by great deeds or kings. It’s in the small every day lives of the little people.

Of Mice and Men… seriously scarring but effective.

The poverty Frank McCourt grew up in was similar to my dads early life. The book made me understand my dads personality and belief systems better.

6. An impactful quote, for sure.

“…everything can be taken from a man but one thing: the last of the human freedoms – to choose one’s attitude in any given set of circumstances, to choose one’s own way.” -Viktor E. Frankl

In my opinion, it is a must read.

5. It really is timeless.

It’s just such a great story of redemption and duty and the letter of the law vs. the spirit of the law.

Javert and Jean Valjean are great character juxtaposition about what it means to really do the right thing.

4. A philosophy to live by.

Ender’s game. Summed up, it’s not about winning, it’s the way we win.

What affected me the most about it was Ender’s incredible empathy. The connection between understanding and love. The cost of winning – destroying a part of yourself each time you destroy your enemies. There’s a quote that just stuck with me for all these years:

It just spoke to my heart. I think about it a lot.

“She was the book thief without the words.

Trust me, though, the words were on their way, and when they arrived, Liesel would hold them in her hands like the clouds, and she would wring them out like rain.”

It is my favorite book and it is so haunting. It really pushed me at a very young age to learn more about the Holocaust and what people went through.

I went so far as to travel to Auschwitz myself two years ago. Powerful and painful but so important for all to educate themselves on what really happened.

1. There’s something for everyone.

Not until my senior year in High School. I picked up Dean Koontz “The Key to Midnight “, and actually read it cover to cover.

Made me realize what Ive been missing, and trying to make up for it.

My to-read list is just never going to get smaller, y’all!

What’s a book that changed you? Tell us about it in the comments!