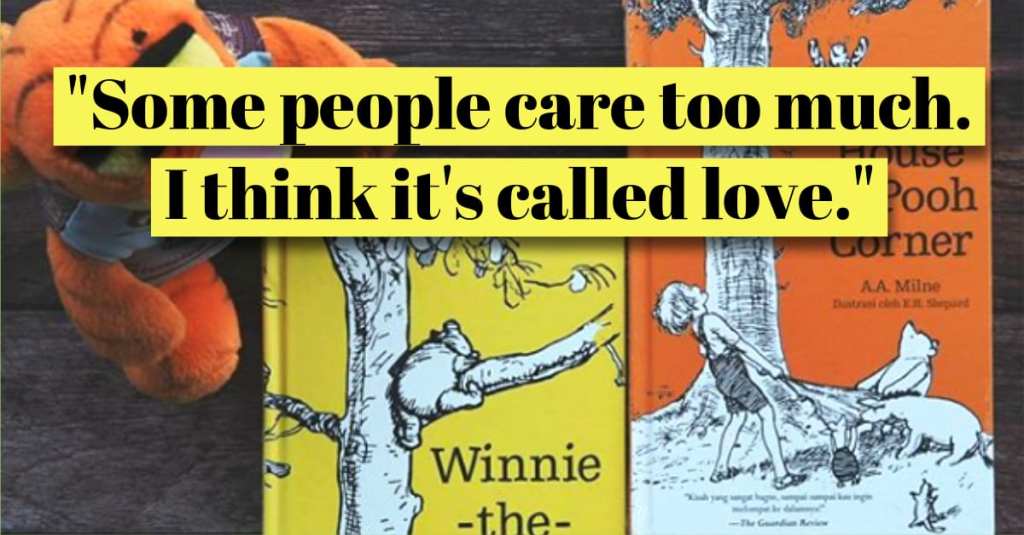 As an author, I can tell you that we spend as much time coming up with the perfect opening line as we do with the right last one – although for me, final lines are easier. I think it’s because the story is told, the characters are well-loved (or hated) friends, and how it ends all comes out in one big whoosh.

I think the final lines of these 14 popular books are spot-on perfection – take a look and see if you agree.

14. The Color Purple by Alice Walker

…..THE COLOR PURPLE…… . When you don't feel like putting down a book because you are too worried about the characters..probably that is when you realise that you are completely in love with a book..This was one such read for me.. . The book starts with Celie's letters to God,in which she narrates her heartwretching story of being raped by her father ,her 2 children being taken away,her sister Netti being separated from her.. . Celie lives in a very sexist and misogynistic society which makes women believe that submission to men's brutalities from abuse to beating to forced marriage to marital rape is what is expected from them.. . Then she meets shug avery and Sofie,2 free spirited and bold women in her life who showed the audacity to live their lives according to their terms…and then her life changes….she eventually learns to think, react,fight,survive and become empowered and liberated. It is always a delight to read about women, who don't lose hope,who keep fighting, women loving, supporting,uplifting and inspiring other women..so that they all live a life of dignity and freedom..and men around them finally changing and accepting them the way they are… . #alicewalker #thecolorpurplebook #womanempowerment #booklove #bookstagram #lovetoread #bookstagramofindia #booksofinsta #bookphotography #bookphoto #fictionlove #fictionlover #books #booklover #bookishlove #bookcoverlove #bookcoverlover #bookstagramindia #bookstagramofindia

“But I don’t think us feel old at all. And us so happy. Matter of fact, I think this the youngest us ever felt.”

You can buy this Pulitzer Prize and National Book Award winner here.

13. The Bell Jar by Sylvia Plath

"I took a deep breath and listened to the old brag of my heart. I am, I am, I am." – Sylvia Plath #thebelljar #sylviaplath #mondaymood

A post shared by The Quaintrelle Book Society (@thequaintrellebooksociety) on Aug 24, 2020 at 9:14am PDT

“The eyes and faces all turned themselves towards me, and guiding myself by them, as by a magical thread, I stepped into the room.”

This is a fictional account of Plath’s experience as a “guest editor” at Mademoiselle.

12. The Old Man and the Sea by Ernest Hemingway

“Up the road, in his shack, the old man was sleeping again. He was still sleeping on his face and the boy was sitting by him watching him. The old man was dreaming about the lions.”

This novel, meant to prove Hemingway wasn’t washed up, is available here.

“But wherever they go, and whatever happens to them on the way, in that enchanted place on the top of the Forest a little boy and his Bear will always be playing.”

Grab this iconic book and share the magic with your own kiddos.

10. In Cold Blood by Truman Capote

“Then starting home, he walked toward the trees, and under them, leaving behind the big sky, the whisper of wind voices in the wind-bent wheat.”

Fun fact: Capote was joined by friend Harper Lee when he traveled to Kansas to investigate the Clutter family murders.

9. A Tale of Two Cities by Charles Dickens

#BookReview 🏰 A Tale of Two Cities by Charles Dickens 🏰 Read this book for #midyearreadathon organized by @codingbiblio and @thebibliophilemommy (Book 2 for Prompt 7) 🏰 This is a famous historical fiction by the great author set in the times of the French Revolution. The two cities are Paris and London, hence it's a tale of these two. 🏰 A man, imprisoned for a major part of his life in Paris, tries to cope with his newly found dream-like reality in which he lives in London with his young daughter and practises his medical occupation. The daughter is loved by three men, all different in temperament and one of them ultimately marries her. She finds her life turned upside down when the revolution picks up pace. 🏰 Definitely, it's a difficult read with long sentences and tough language. It is light and dark, it is warm and heart-rending. It demands focus and serves you with a memorable story. 🏰 In his satirical tone, the author shows a picture of that time when the lives of poor had no value in the eyes of the high-handed and corrupt nobility. He has painted unforgettable scenes like the wine spilling scene and when a monsieur drives over a poor lad. 🏰 The moving end being the best, the second best part about the book is that it doesn't stop at the overthrow of the King and Queen but tells how the old destructors are now destructed by the new ones in the name of justice. 🏰 Final verdict: If you are not afriad of attention-demanding language and lingering pace, pick it ASAP. Certainly recommended to the fans of classics. ⭐⭐⭐⭐ . . . . . . . P.S.: HP fans! It has a Snape-like character. I have lost my heart to him 🥺❤ . . . . . . #qotd- The toughest book you've ever read? . . . . . . . . . . . #ataleoftwocities #charlesdickens #ataleoftwocitiesbook #bookstagram #indianbookstagrammer #booknerd #bookrec #2020reads #classics #classicreads #bookishflatlay #bookaholic #bookaddict #rupapublicationsbooks #bookworm #deeksharecommends #2020fav #bookrecs2020 #whattoread #weekendreads #pickingclassics #charlesdickenslove #charlesdickenbooks #snapelikecharacter #toughreads #readathonreads #bibliophile

Almost as iconic as the opening line, “It was the best of times, it was the worst of times …”

If you need a refresher, you can buy the book here.

8. On the Road by Jack Kerouac

*On the road* by Jack Kerouack In times when we can’t travel, this book will take you to beautiful places. Apart from being a beatnik generation written anthem, it’s mostly a book of the self quest. It’s a story of a young man discovering his path, his voice, experiencing love and friendship but also disappointment. The descriptions were so vivid I felt like I was there, I could smell and feel it all. One quote stayed with me for almost 10 years since I read it : “I suddenly realized I was in California. Warm, palmy air – air you can kiss – and palms.” One of my all time favorite ❤️ #bookstagram#book#books#booklover#booknerd#bookaddict#bookstagrammer#polishbookstagram#polishbooklover#bookreview#bookrecommendations#polishbookstagramer#ontheroadbook#kerouack#beatniks

You can re-read the favorite book of college boys everywhere and see if it holds up as an adult.

Excited to do a minimal amount of traveling this summer and be in Missouri (birth place of Mark Twain 😉) for a little bit! Are you able to travel anywhere this summer? ☀️ 📚 . . . #marktwain #adventuresofhuckleberryfinn #missouri #stlouis #read #readclassics #readmore #reading #nowreading #sundaystack #bookstagram #bibliophile #bookish #booklove #book #books

“I got to light out for the Territory ahead of the rest, because Aunt Sally she’s going to adopt me and sivilize me, and I can’t stand it. I been there before.”

It is kind of sad, if you think about it.

6. To Kill a Mockingbird by Harper Lee

Scouts neighbor, Dill, is based on Truman Capote.

Buy a copy for yourself here.

5. The Grapes of Wrath by John Steinbeck

“She looked up and across the barn, and her lips came together and smiled mysteriously.”

It kind of seems like a cliffhanger, but if you’ve ever read this depressing novel, you’ll recall being glad that it wasn’t.

See how you feel about it now, and read the book again.

“So we beat on, boats against the current, borne back ceaselessly into the past.”

Poetic, right? Nab a copy and read the whole, sad tale all over again.

3. Little Women by Louisa May Alcott

My shop has just been updated with lots of lovely old books. Including this beautiful illustrated edition of Little Women 💜 I have a slight confession to make though – I’ve never actually read Little Women! Are there any books on your ‘to be read’ list which you can’t believe you haven’t read yet? This is definitely mine! X . #books #book #oldbooks #vintage #vintagelove #vintagebookillustration #vintagebooks #vintagebook #readmorebooks #littlewomen #louisamayalcott #bookshop #bookseller #bookworm #bookaholic #bookaddict #booknerd #booklovergift #booklover #booklove #booksofinstagram #bookstagram #illustrations #littlewomenbook #booktherapy #chronicillness #invisibleillness

“Oh, my girls, however long you may live, I never can wish you a greater happiness than this.”

And no, she never considered putting Jo and Laurie together.

You can buy it (and shove your copy in the freezer) here.

"I gave him my heart, and he took and pinched it to death; and flung it back to me. People feel with their hearts and since he has destroyed mine, I have not power to feel for him." Wuthering heights is a classic which is a must and should be in everyone's list. Like any other story, this will leave you in deep thoughts. Although it took me few attempts to understand the depth of the story. In the end I could understand why people loved it so much. #bookblogger #booklover #booknerd #bookstagram #bookstagrammer #bookandteatime #books #bookish #book #bibliophile #bookaddict #bookphotography #booksofinstagram #reading #bookaholic #booklove #bookblog #readersofinstagram #emilybronte #bookcommunity #bookshelf #reader #bookobsessed #instabooks #thebookhop #wutheringheights #lovestory #treesandbooksgotogether #communityofbookstagrammersandauthors #communityofbooks

“I lingered round them, under that benign sky; watched the moths fluttering among the heath, and hare-bells; listened to the soft wind breathing through the grass; and wondered how any one could ever imagine unquiet slumbers for the sleepers in that quiet earth.”

If you haven’t read this in a while, may I recommend buying your copy now, and reading it in the dreary days of winter.

1. Memoirs of a Geisha by Arthur Golden

“But now I know that our world is no more permanent than a wave rising on the ocean. Whatever our struggles and triumphs, however we may suffer them, all too soon they bleed into a wash, just like watery ink on paper.”

Read it again – or for the first time – with a pretty new copy.

If you would change any of these I would love to know how in the comments!

You know what they say – don’t come with a problem if you don’t have the solution!