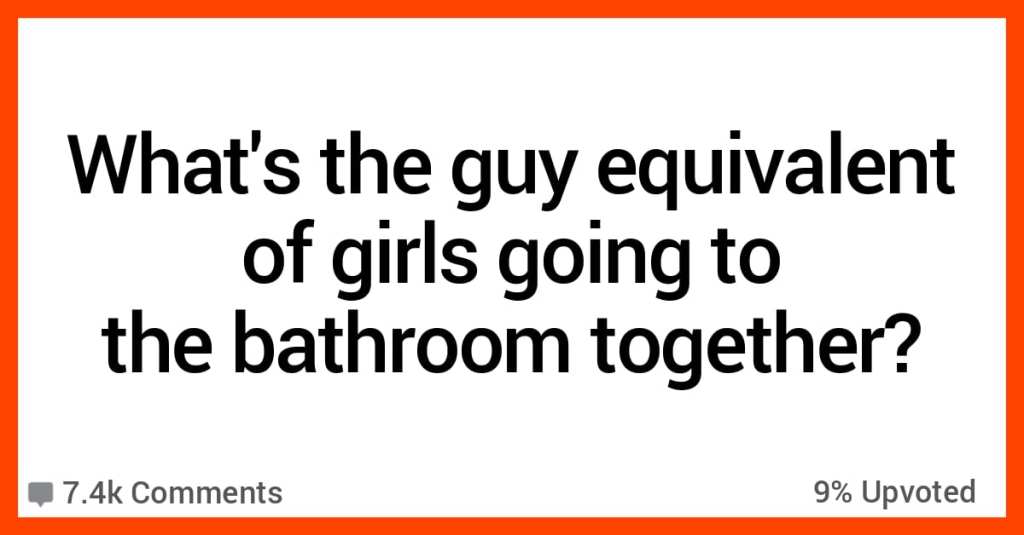 There are things we think of as “guy things” or “girl things” even though we recognize that there are people in both groups who don’t identify strongly with the stereotypes.

One of those “things girls do” is go to the bathroom together – and I would submit to you that it has more to do with safety than wanting to gossip or check each other’s makeup.

What is that “thing guys do” that’s the same sort of practice?

Stay tuned, because these 21 people are going to tell you what they think!

This reminds me, once I was at a place with unisex bathrooms. I went to the loo and realized some of the women in my group were going at the same time as me! Next I was introduced to the female custom of (dun, dun, DUN!) continuing the previous conversation when we entered the toilets!

With guys, in the small amount of times that we do need the loo at the same time, we always abruptly stop and continue the conversation after we’ve left the toilets (unless we’re really drunk then talking or singing is acceptable). Having a conversation while going to the toilet always seems awkward to me.

19. Women drink together, too?

My wife was recently curious about what me and my friends talk about in our group chat. She was wondering if there was any gossip or talk about wives or whatever.

Nope, just a bunch of recorded farts and completely unintelligible conversation going back at least 3 years.

Don’t know what it’s called but we have 3 men and 1 woman who have to go together.

I asked what she does. They said she stands guard

15. Everyone has their role.

Have three people involved in a project that takes one.

From assembling furniture to barbecuing food, for some reason guys need one person to do the task and +2 people to stand around providing commentary/advice.

Standing around the grill.

Going out to the garage to look at the car, new tools, etc.

I just want to remind all men that we took an oath of secrecy.

Answering with the true answer will destroy the very fabric of our way of life.

10. Even though no one knows how it works.

Standing around the open hood of a car.

Oh, now I see other guys beat me to it. Any of you guys need a beer?

9. As a woman, I am happy to never assemble the furniture.

Stand around a grill, a car with the hood open, or some unassembled furniture, all with some beer.

Its all just there for the atmosphere.

Saying, “well, thats not going anywhere” after putting tow straps on something, this must be done every time a man straps something down to a car, and any other male in the vicinity must agree with him.

7. The phrase that can be heard for miles.

Not so much anymore, but in my twenties and thirties all you had to say was, “Gonna burn one” and like five or six of my friends would materialize and follow me out to the deck to get in the rotation. It could be 2° outside and we still form a circle and talk about random shit while we smoked.

When 1 guy is bbq-ing, he needs other men around with beers in hand for technical support

4. You’ve gotta have that guy.

Watching the one guy dig the hole.

Whats up with the whole girls going to the bathroom together?

In our school it was boys always going together and it turned out there was a fight Club going on in there and they were bidding on kids to see if they’d win.

Guy 1: yo, guy 2 is gonna do something crazy stupid

1. The garage is the male bathroom. Or something.

Going to the garage to drink beer and look at the car and/or tools.

I guess I agree with these, though men don’t do any of these things together to stay safe.

Is there something they missed? Tell us about it in the comments.