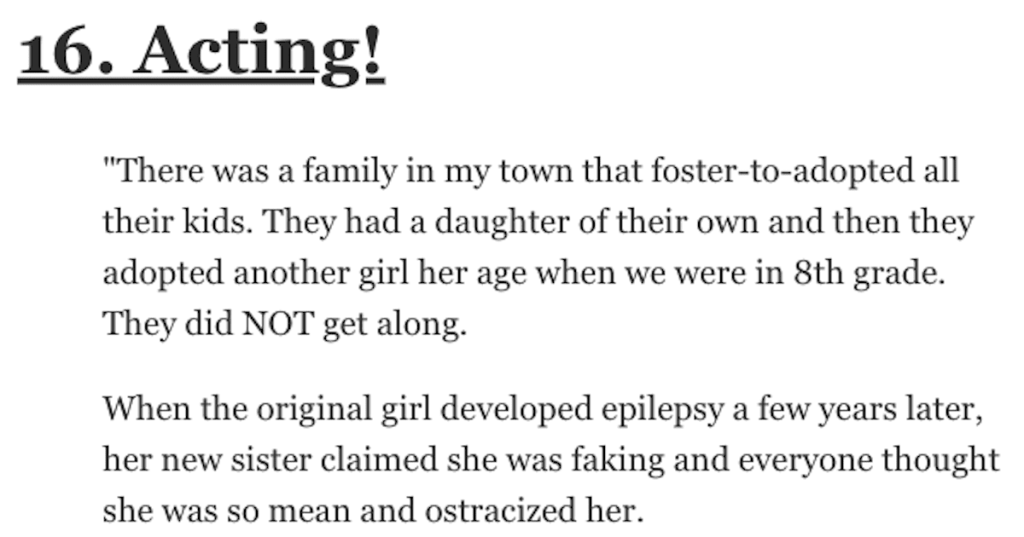 I’m having a hard time pinpointing one BIG rumor that captured everyone’s attention when I was in school, but I think it had something to do with a girl in my class getting pregnant and having to leave school due to her parents’ shame.

And I honestly can’t remember if that was true or maybe that poor girl just moved schools for another reason and had to deal with all that gossip.

Schools are total rumor mills, in case you forgot.

Folks on AskReddit shared stories about big rumors at their schools that turned out to be true.

“That a 12-year-old 6th grader had gotten pregnant over summer break.

Our Los Angeles county suburb (it was a small and far-separated from LA itself, see how large that county actually is on Google if you are unawares) was so scandalized by this “rumor” that a newspaper article came out with a cartoon drawing of a pregnant girl in a pretty little girl dress and ribbon in her hair — playing with dolls and kneeling next to a doll-house — accompanied the story about the “little girl who got pregnant and planned to keep the baby.”

She was interviewed. I remember her name but it’s unnecessary— the whole town knew who it was.

What’s wild is that the kids in Jr. High actually had a baby shower for this 7th grader as she got close to full-term, and all brought in packs of diapers and formula for her on a designated day. With the teachers, principal, and probably the school district in support of this.

“In high school: that the biology teacher was growing weed in the environmental lab. Supposedly he did it for 30 years without anyone noticing. No one could ever prove it though.

Later on, I was assigned to be the agent taking care of some of his financial matters, so I went to his house to have him sign some paperwork. He had a hydroponic setup there, so I asked him about the environmental lab. It was like Han Solo in The Force Awakens.

“There was a rumor that a teacher had s** with whole basketball team.

Well, turns out it was half of the team.

Worst part is her son was on the team.

Her husband ended up divorcing her and her son left with his dad.”

That rumor started on Day 1.

Four years, two divorces, and two very quick departures later it was confirmed and what was left behind was a technicians daughter in my year whose life had fallen apart.”

“In middle school, we had a “cool” Social Studies teacher. He loved the popular boys, especially the athletes, and not only ignored bullying in his classes of unpopular kids, he often took part in it.

He also offered up his services for tutoring to these boys. Everyone always thought he was a kiddie toucher, except the popular boys who would threaten you if they heard you talk bad about him. When we came back to school at the beginning of 8th grade, he was gone. As was one of the more popular boys in school. He transferred to an insanely expensive private school.

Turns out, sure enough, he was assaulted by the teacher several times during tutoring sessions at the teacher’s house. The school district agreed to pay to send the kid to private school as part of a settlement.”

“That this girl at my school who was maybe 16 was banging all the older kids who never left for college.

Well she definitely was and everyone found out when she banged one of the cooler guys still in high school and there ended up being a herpes outbreak at my school.

“There was a family in my town that foster-to-adopted all their kids. They had a daughter of their own and then they adopted another girl her age when we were in 8th grade. They did NOT get along.

When the original girl developed epilepsy a few years later, her new sister claimed she was faking and everyone thought she was so mean and ostracized her.

Eventually, she had to fess up to faking the seizures all along when she signed up for basic training, which she never even completed. Unfortunately this was after we all graduated, so we never got to apologize to her sister.”

“That one of the students was actually a cop.

Turns out he was a cop and busted one of the actual students for selling handg**s in school.

If you thought 21 Jump Street was unrealistic, think again. The cop was a 33 year old male and undercover for like half the semester.”

“In Elementary (about 15 years ago), our favorite school teacher didn’t come back after a summer break. He was awesome: funny, sporty, cool, down to earth, never shouted. Just a great role model to have around when you are a kid.

Then I went to the local grocery store with my Mom a little while after school had started again. I saw my old teacher. He was a shell, a wreck. I was only 8 but even then you can tell when someone isn’t there anymore. I asked parents of my friends, and they confirmed the rumors.

I felt so bad that something as awful as that could happen to one of the best guys I ever knew and always looked up to. Turns out he committed suicide a couple of years ago. Same bridge that his wife and daughter d**d on all those years ago.”

“There was always a rumor that the head janitor was a huge pothead and would smoke with students in one of the storage sheds away from the main building.

I always figured it was bulls**t until my friend CJ sent me a pic of him and the janitor smoking weed while surrounded by folding chairs.”

“In my Catholic (Jesuit) high school, one of the priests and one of the nuns were very close friends.

We all loved them, and we could see that they were quite fond of one another (and they made a really nice looking couple). We used to affectionately kid them about “meeting in the tunnel” between the convent and the rectory.

A few years after my class graduated, they both left their Orders, got married, and had kids. We’re all happy for them.”

“We had a dean who “retired” one summer.

Turns out, he was busted in a huge sting by cops. He had 2 ladies of the night and coke in his apartment when he got rolled up; ended up pleading guilty to felony drug possession (a few others I can’t remember), and sentenced to 5 years of probation.

He was an advisor for the school’s Drug/Alcohol Task Force.

Nice enough guy. Really cool with all of his students, maybe too cool.

“That one of the kids hung himself on a swing set in a local park.

They didn’t say who it was, and just thought it was a vicious rumor about the same guy.

Then four girls who were close to him came down the stairwell crying and ran out the front door and started heading in the direction of the park.

It was confirmed around noon, we were sent home after lunch.”

“Our freshman science teacher was a massive jerk to any girl, and would frequently throw the dress code book at girls for the slightest issue.

Everyone said it was because he was p**sed his daughter became a str**per… that ended up being true.”

“Some girl had s** with her half brother.

We all thought it was rumor until she got drunk at a party and told everyone.”

“I had a science teacher that was rumored to get a bo**r whenever he started shouting.

We thought it was a myth until we noticed it for real, he would always try put one leg up on a chair to hide it”

“At our school this one kid was rumored to be a son of one of the local gyms amateur boxer teacher.

None of us had no real reason to think twice about it. Once we got to high school this kid started teasing that kid. I had a couple of mutal friends with the bully so I warned the guy he might want to let up on teasing him. A couple days go by the dude didn’t stop. And the boxer’s kid proceeded to give this guy one of the worst one sided fights I have ever seen.

The bully learned his lesson and never bullied anyone else for the rest of our high school years. So it turned out to be true.”

“In middle school, there was a rumor my 7th-8th grade Social Studies teacher owned a pet donkey.

Turned out to be true.

The donkey’s name was Pedro the Donkey.”

“Paige WAS pregnant….none of us believed her.

We were 13 and we were just about to start S** Ed classes in a few weeks to learn about s** so we all thought she was making it up. Then she started to gain weight but she had always been kind of overweight and so no one really believed her then either.

Then she brought sonogram pictures in because she was sick of people not believing her. Most people believed her after that. Then she got taken out of school and this was back when FB was super popular and everyone was talking about her baby a few months later she had posted all these pictures.

Sorry I didn’t believe you Paige….I looked her back up when I was 15. She had a second kid.”

“There were rumors that there was a network of underground tunnels that connected every building on my college campus.

Didn’t believe it til I walked through them myself.”

“We had heard an underclassman (she was 15-ish) was sleeping with a local army guy, but nobody really believed it until the day our school got locked down bc her boyfriend showed up with a knife.

The boyfriend (in his thirties) was intending to force her go get an D&E, but our principal was a bada** who locked her in his office, then took the boyfriend DOWN and held him in a headlock until the cops arrived.”

“That the Biology teacher decided to use the scientific method to personally prove or disprove to himself that humans could photosynthesize.

He did this by laying bare a** nak** on his front lawn, landing him a public indecency charge.”

Were there any big rumors in your school that turned out to be true?