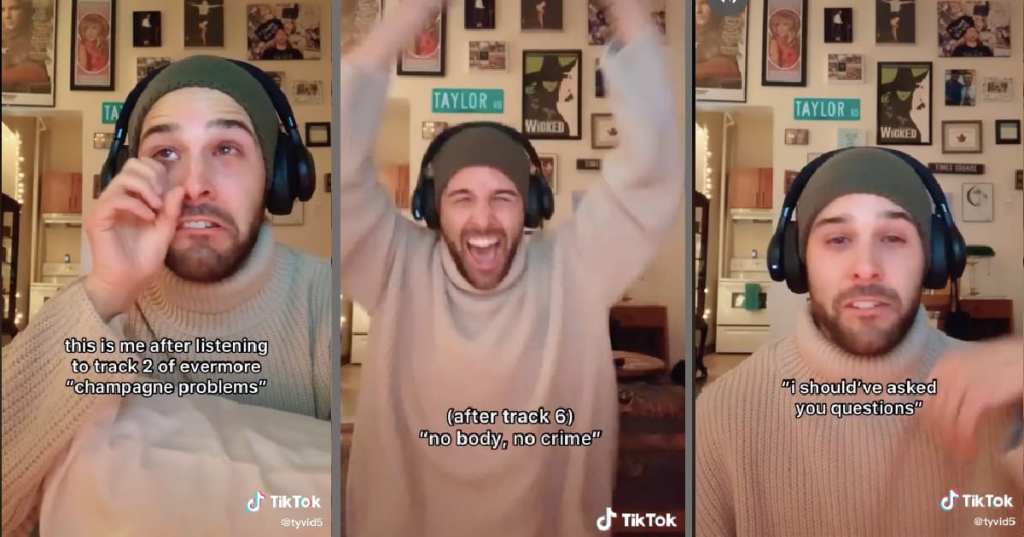 I know that not everyone is a Taylor Swift fan, but it would be hard to argue against the fact that she’s totally killing it lately.

She released not one, but two albums in one year to critical and popular acclaim, and the first one was nominated for several awards.

So, please don’t take us sharing these jokes as any comment on her or her success, which is deserved…but that doesn’t mean they’re not funny!

We thought we were ready but we weren’t.

You have to admire that.

23. I know she’s not TRYING to make us feel bad about ourselves.

22. Insane in the best possible way.

this woman keeps showing up and dropping albums at my door she’s insane pic.twitter.com/l3j157yCDG

I’m sure you’re being handsomely rewarded.

She could have just gotten fat and drunk like the rest of us.

I don’t think there’s enough to go around.

17. Why is this so accurate though.

I feel oddly called out.

And you can never have too much Dan Levy.

He picked the perfect listening spot.

#evermore #taylorswift #heck #ya #sorry #if #your #finals #are #not #over

14. Why is this the perfect mashup?

We just can’t get enough.

13. I’m not saying there’s going to be breadsticks, but…

There will be breadsticks.

There's an Olive Garden in the Gillette Stadium parking lot. The next tour is going to be wild.

And I am here for it.

And Jake is always right.

9. Just in time for the holidays.

Our dream of singing on a COUNTRY FOLK SONG with the one and only queen of storytelling, miss TAYLOR SWIFT is our second Hanukkah present to you!

7. They don’t even compete with each other, either.

evermore and folklore sitting at the top of my list of favorite albums pic.twitter.com/cjiUekheDe

It’s probably not “fine,” though.

That joke has just been there waiting all of this time.

But also bring it on.

And this TikTok is life.

1. We needed at least the morning off work.

Is “Evermore hangover” a reason to call in?

I’m such a fan, I think it makes me enjoy these jokes even more.

Which one made you snort-laugh? There had to be at least one!