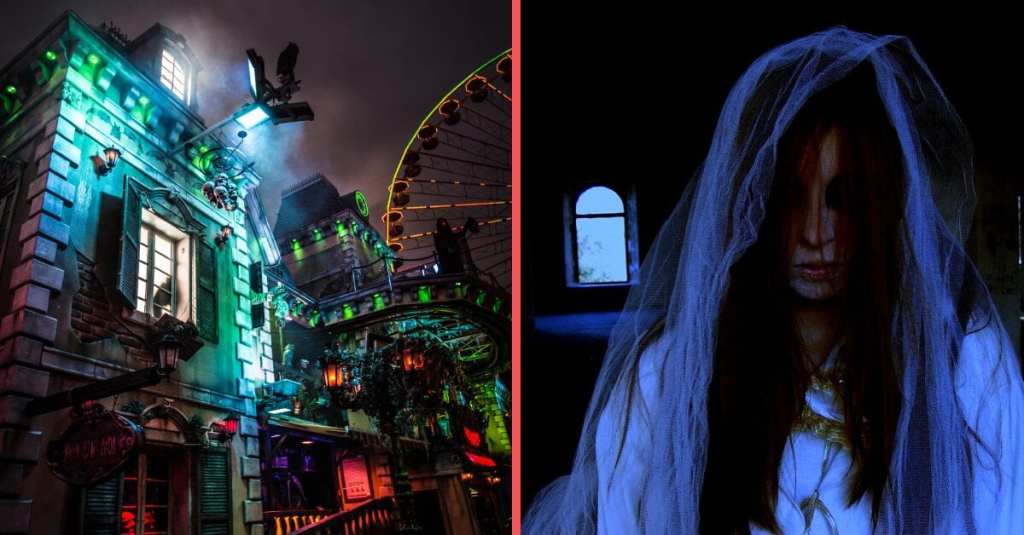 I don’t know what this says about me, but  as a teenager, going to haunted houses was about the only thing I enjoyed about Halloween.

This, even though they were in a terrible part of town where people actually got shot at least once, so my dad insisted he drive my friends and me in his minivan.

There’s just something so fun about being terrified, and if you happen to go with your crush? That’s a built in reason to grab their hand, my friends.

What goes on behind the scenes, though? I’m dying to find out, and Margee Kerr – a sociology professor at the University of Pittsburgh who moonlights as a consultant for ScareHouse (a local haunted house) – is ready to share!

8. You’re not imagining the smell.

There are entire companies out there helping design the smells inside of a haunted house – something, you know, that smells sort of like a rotting corpse but won’t actually make you vomit.

Kerr says Scare House uses several different scents, but one of them is boar urine. She says it’s “awful, but in a way that isn’t completely repulsive.”

There’s a fine balance, she says, and it’s important to get it right.

“Something like bad breath is just going to make people disengage and move away. But there’s other smells that are weird and gross, yet that don’t take you out of the experience.”

Other haunted houses shy away from using strong scents, since they’re not something you can easily adapt if it’s not working for a particular group or evening. 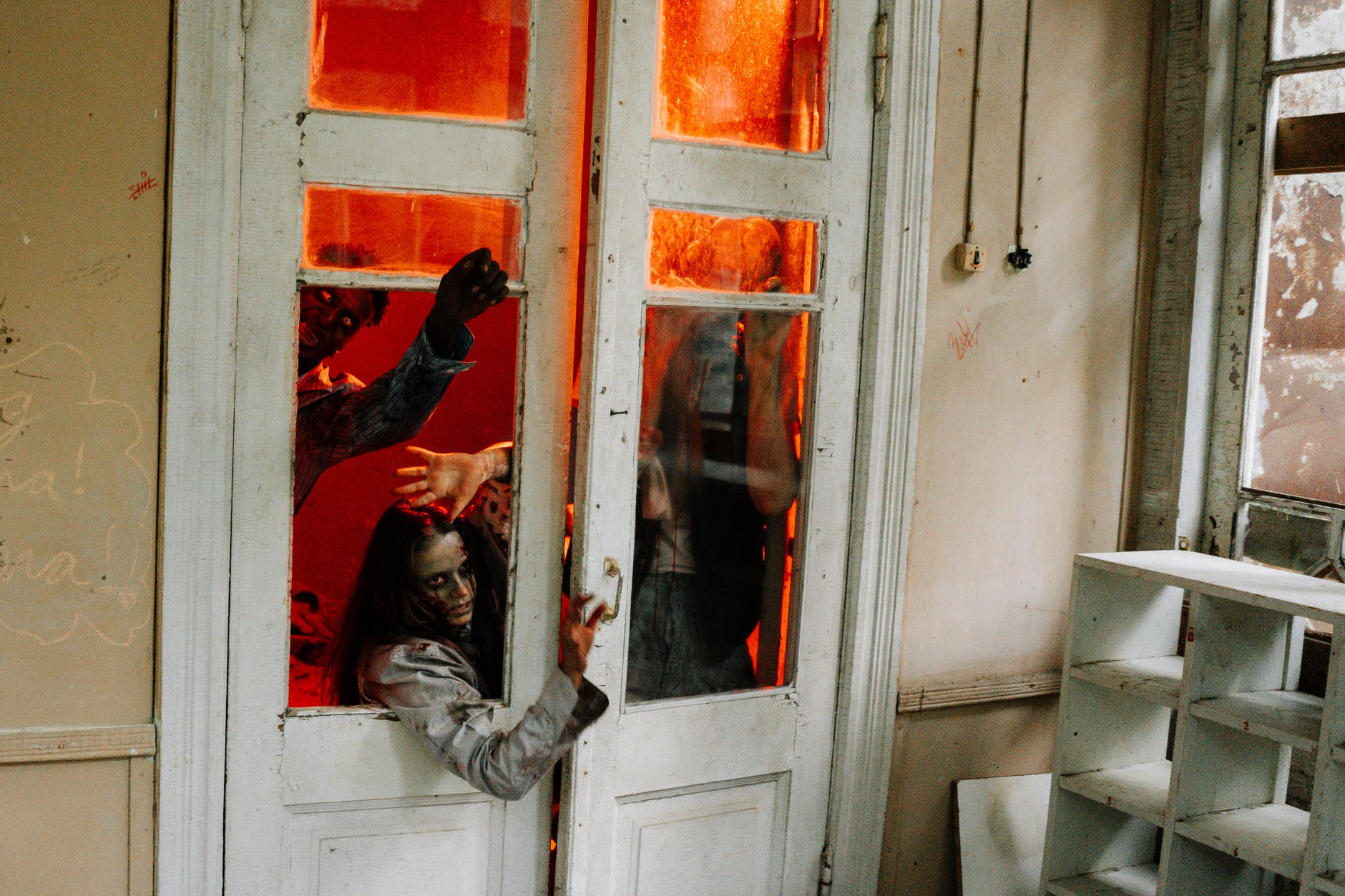 Kerr and others like her have been polling haunted house visitors regularly for years, to make sure that the scariest thing they can imagine in any given year is featured during their scares.

Zombies, ghosts, demons, witches, serial killers…everything is on the table, they just want to keep up with the times.

Kerr says that zombies are still high on people’s lists, and so are popular movie serial killers like Jason and Freddy, but that sideshow, clown-type freaks have also enjoyed a rise with the remake of It and the popularity American Horror Story.

6. Employees are trained to adapt.

Day 2 of auditions and interviews for ScareHouse 2020. The scare is still there!

Employees keep an eye on groups as they go through the house, and if they’re not scared or jumping enough, they’ll abandon the plot or progression and go straight for physiological jump-scares.

The opposite is also true, and “if someone is too scared we train our actors to back off …We want them to have nightmares for a week, not the rest of their lives!”

D. Brandon LeJeune, who manages the House of Torment in Austin, TX, says the goal is “to scare first and foremost, but when that doesn’t work out, we fall back to entertaining.”

He also agrees that guests are told to “inform a monster” if they are too scared to go on, and they will be escorted out – something that happens “on a very regular basis,” he admits.

Aside from these instances, though, staff largely stick to the script.

5. Cheap tricks can be super effective.

Oldies but goodies, like black-out rooms and strobe lights, are as effective as any high-dollar scares as far as getting the reactions haunted houses want.

Kerr also says that subtle movements, like walls that move slightly when you lean against them, and floors that are a bit too creaky or too rigid, all work to just throw people off their expectations.

Those, combined with good, old-fashioned startles, remain the fundamentals of every successful haunted house.

4. And sometimes simple is better.

Kerr says ScareHouse tried a scene in 2009 where there was a battle between good and evil, but the idea was too complex – it wouldn’t allow people to access their primal fear.

“That was a lesson in how simple is better – narrative thread good, narrative cobwebs bad…a little bit of narrative goes a long way.”

3. You should never let your guard down.

UPDATE: All ScareHouse tickets must now be purchased in advance. No tickets will be sold at the door. We have decreased the number of tickets sold each night to help with wait time and social distancing on the property. Tickets WILL sell out. Purchase online and early to reserve your date from scarehouse.com With capacity so limited many dates and timeslots will sell out. So if you’d like to visit on a certain date or time, no joke, get ‘em before they’re gone. There are many people out there who can sadly attest to being turned away because tickets were Sold Out on our opening weekend. Due to necessary Covid regulations set by local health officials our haunt feels a bit different and a bit shorter this year due to social distancing of our creatures, the temporary elimination of all touchpoints & tight spaces, and mandatory reduced occupancy for both guests and cast. But because of this limited capacity, haunt fans will enjoy shorter wait times and be able to enter the haunts with no one other than those in their personal bubble – it's just you and your friends alone in Pittsburgh's favorite haunted house. Just don’t forget your mask!

If you’re feeling like you have a moment to breathe, it’s probably because something is about to scare the bejeesus out of you, says Elizabeth Harper, an LA-based lighting designer.

“If you subvert the patter, the audience has a moment of relief where they feel like they’ve escaped unscathed – and that’s your opportunity to really scare them.”

One employee describes how they manage this within one of their scenes:

“In the morgue, visitors see a rib cage slowly lifting up.

While they’re turned and looking at that, it allows the actors to slowly creep out of their scare pockets and slide right to the middle of the group.”

And that, my friends, is when the real scare happens.

2. They produce a natural high.

Virtual rides are fun – but the real ride is even better! ScareHouse's new version of the classic Old Mill @kennywoodpark is PACKED with details, gags, and references to Kennywood and Pittsburgh! Take the family for a ride this summer and let us know what you think! . . . #oldmill #kennywood #darkride #amusementpark #scarehouse #hauntlife

Some people have linked those feel-good feelings with being scared, others enjoy the feeling of accomplishment at conquering something that scares them, and other people just love horror, but either way, there’s a good chance you’ll get a mood boost from your night at the haunted houses.

“The adrenaline, the dopamine, the endorphins that course through your body – the scary material is just a trigger for that kind of response with some people.”

1. They may be a way to connect with more primal humans.

We’re happy about that, of course, but Kerr says those facts can make it hard to imagine exactly what it felt like to be a primitive human.

“For many Americans, their emotional expressions on a day-to-day basis are very narrow.

We’re not having many highs or lows. We’re living a more restricted emotional life.

I think that’s why we go out to scary movies and haunted houses – we evolve to have this massive range of emotional experiences, and we still want them.”

So, go and feed your primitive, dark side, is what she’s saying – it’s only human, after all!