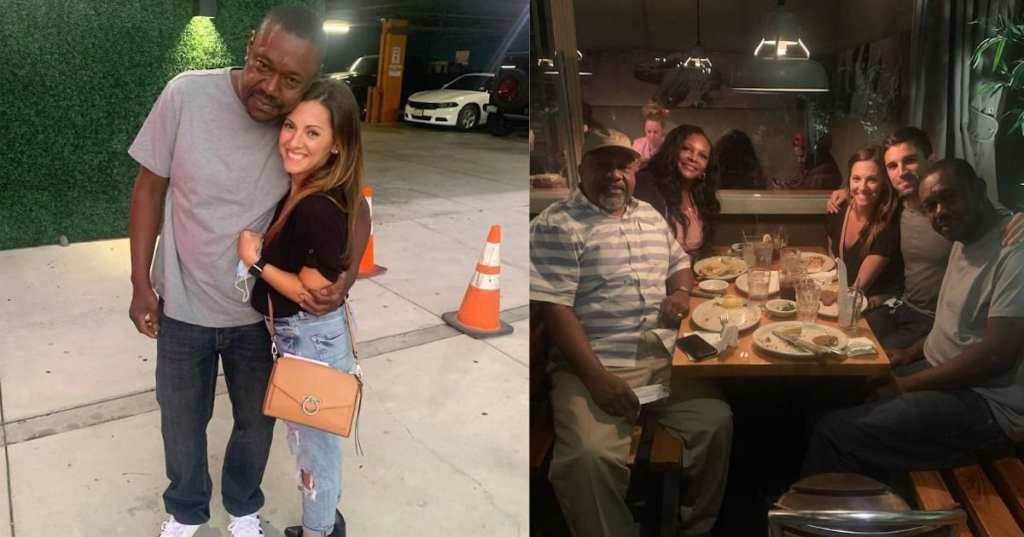 Randi Emmans-Bailyn and her boyfriend, John Suazo, always help people in need, but they went above and beyond by helping a homeless man reunite with his estranged family.

Randi had met Pedro (aka Franklin) in a random occurrence:

I had been outside walking my dog when I overheard Pedro saying, ‘Why do people just stand and look at me or laugh at me? I’m an extremely educated man. Say hello to me. Do not ignore me and give me these looks.’ I was so touched by what he was saying, and it absolutely broke my heart.

I run a program for those experiencing homelessness during the holidays and knew I wanted to help Pedro in some way. I came upstairs to my boyfriend, John, and told him how touched I was by what Pedro was saying.

The duo decided to go back out and bring Pedro a backpack full of food, water, and socks from their charity, Project Backpacks. He relayed his story of homelessness and how tired of it he was—all he longed to do was go home.

Thank you @goodnews_movement for sharing the story of our journey with Pedro “Franklin” ❤️ #Repost @goodnews_movement with @get_repost ・・・ (Los Angeles, Ca): Randi and John got to talking with Pedro, who lived outside their building. Pedro, who was experiencing homelessness, hadn’t seen his family in 20 years— with his permission, the couple researched and tracked down his family and raised funds not only for a reunion but to help get him back on his feet. This incredible story comes from amazing GNM followers @randiemmansbailyn @suazozulu and @projectbackpacks

He had no information about his family, but he did remember his grandmother’s address. With their help, he finally found his Uncle Pierre, who was ecstatic to talk to his nephew. He vowed to fly out to where Pedro was and bring him home to his cousins, his mother, and multiple aunts.

In the meantime, Randi and John put Pedro in a hotel and raised $6500 to get him home. When the day came, it was emotional for everyone, including Randi and her boyfriend.

For everyone who followed along with us on Franklin’s (real name Pedro) journey and to everyone who donated… thank you! We were able to help reunite him with his family last night. His cousin and uncle flew in last evening and will be headed back to Charleston, SC today to start this new chapter in his life. For anyone who is new to this story, Franklin was a homeless man outside of our building who we got to know in the past couple of weeks. He is so smart and kind and all he wanted was to be reunited with his family. John and I searched the internet and John was able to find a phone number to a family member. He and his family hadn’t spoken in over 20 years. As soon as we told them we had found him they said they would get on a plane because they too had been searching for him for the last 20 years. We raised money and got him into a hotel, got him fresh clothes and shoes, food and other essentials. Please when you see someone on the street don’t look away if they say hello. It’s what he said made the difference to him every day- the people that acknowledged him kept him going and made him feel like someday he wouldn’t be so lonely. He touched our hearts forever and we’re going to miss him. We cannot wait to see what this chapter holds for him. #giveback #homeless #LA #Helpothers #projectbackpacks

Pedro, his family, and his newfound friends had dinner together.

The couple witnessed the family’s close interaction with him, and it looked like the decades apart just melted away.

I cried reading the words that Pedro said about us. He will forever be family now. Please let this be a reminder to be kind to one another. You never know what someone else is going through or what a small act of kindness can do to brighten someone’s day. #giveback #helpthoseinneed #homeless #losangeles #bekind Link in bio

Pedro is now home and happy. Randi and John have vowed to visit him, and have made a friend for life.

Have you helped someone in need?