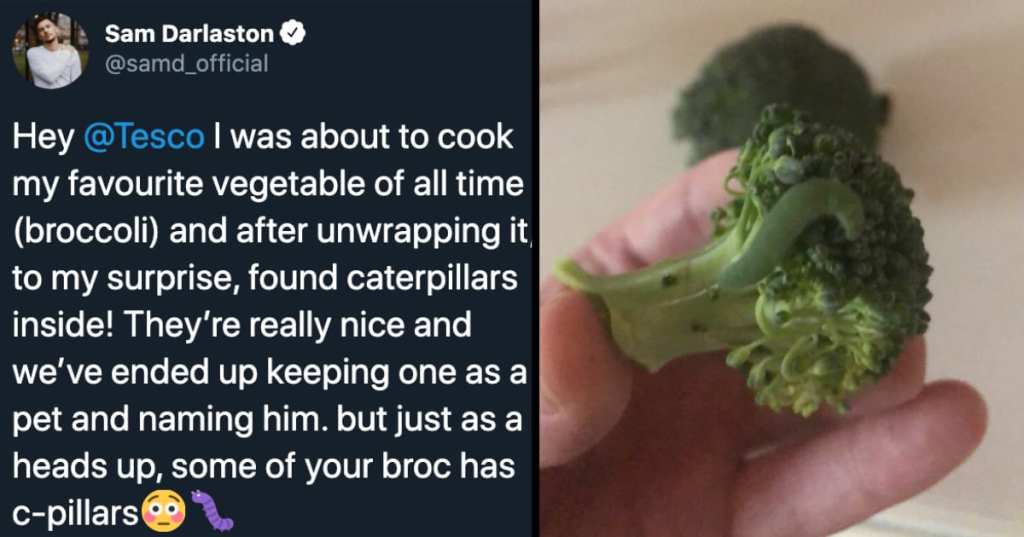 At one point or another, we’ve all found insects in our fruits and veggies. But how many of us decided to raise them as pets?

According to the USDA, some bugs are allowed in our food (meaning that if you swallow some in your lifetime, you won’t get sick). We just can’t get rid of them all.

Broccoli, for example, sometimes has caterpillars crawling on it. After finding them on his groceries, a British man named Sam Darlaston decided to give them a home.

Hey @Tesco I was about to cook my favourite vegetable of all time (broccoli) and after unwrapping it, to my surprise, found caterpillars inside! They’re really nice and we’ve ended up keeping one as a pet and naming him. but just as a heads up, some of your broc has c-pillars😳🐛 pic.twitter.com/3VLIQAEogG

When he bought more broccoli, he found more caterpillars.

OH MY CHRIST. Just bought another broc and before I’ve even opened it I can see caterpillars 😭🐛 pic.twitter.com/xUBFmuiT5B

He set them up in their own home and starting posting their journey.

The OG caterpillar Cedric has begun evolving… is Caterpie is about to become Metapod 😮 pic.twitter.com/sRRXnrR3qs

Two had become the best of friends.

Day 3, and we’ve got our first caterpillar romance story. Janine and Slim Eric nap together, eat together, and occasionally dance together 🐛 pic.twitter.com/t883KOVgi0

They began to develop individual personalities.

Croc needs to learn not to play with his food tbh 🐛🐛🐛 pic.twitter.com/9dqPyRUcxK

Then they started to evolve. This didn’t happen all at once—some took a little longer than others.

Final update of the day… we’ve now got 3 cocoon / chrysalis, they grow up so fast 😭🐛 pic.twitter.com/AZIJMvOYnI

And then, one day—a pretty butterfly emerged. Cedric was the first.

Broc then became a chrysalis on Friday night… But then on SUNDAY MORNING I WAS GREETED BY CEDRIC!!!! he’s changed a bit 🦋🦋🦋 pic.twitter.com/KvqorlRFKh

Sam gave them life and in doing so, it was time to set them free.

3/7 of the Tesco broccoli caterpillars are now wild butterflies 😭, this morning Janine joined Cedric and Slim Eric for her new life ✌️🥦🦋 (thought she’d at least say bye but she just bolted) pic.twitter.com/ZxggmWc6VP

And he released one on the air live with the BBC audience listening.

AN HONOUR to be on @BBCRadio2 with the legend @theJeremyVine discussing my caterpillars and releasing Broc and Olly live on air 🥦🐛 this is it, life’s peaked really pic.twitter.com/KLFp1rDg1d

His story even reached the US.

WE GOING INTERNATIONAL NOW CATERPILLARS 🐛 🐛🐛🐛🐛🐛🐛🐛 the confusion on his face 😭 Slim Eric is taking America 🦋 pic.twitter.com/ofJqSNUlG8

All in all, Sam raised seven caterpillars who all matured as expected. They became butterflies and went out on an adventure that they probably wouldn’t have had were it not for him.

Sam said that their release was bittersweet, and he misses watching them grow. But he shouldn’t worry—there’s always more broccoli.

Have you ever seen a caterpillar become a butterfly? Let us know in the comments below!