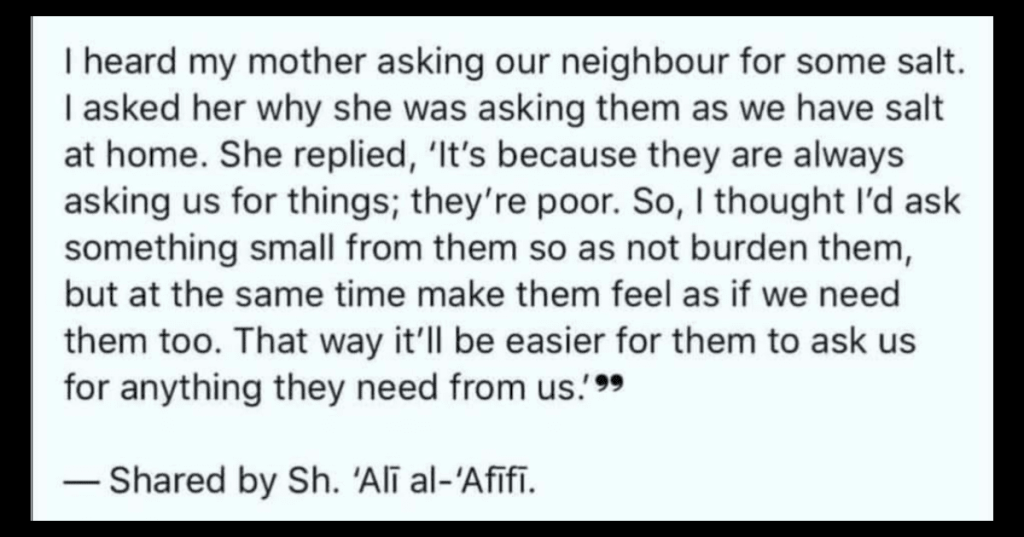 A Simple Lesson On Why Favors Should Always Go Both Ways

If you’re lucky enough to have spent your life in relative financial security, you might not realize that one of the toughest things about hard times is feeling as if your dignity is tied to your bank account.

We know that we all need help sometimes, but asking can still be a difficult thing to do.

This woman (and good mother and neighbor) has a simple solution that allows people who need help to feel better about asking for it – and it’s taking the internet by storm. 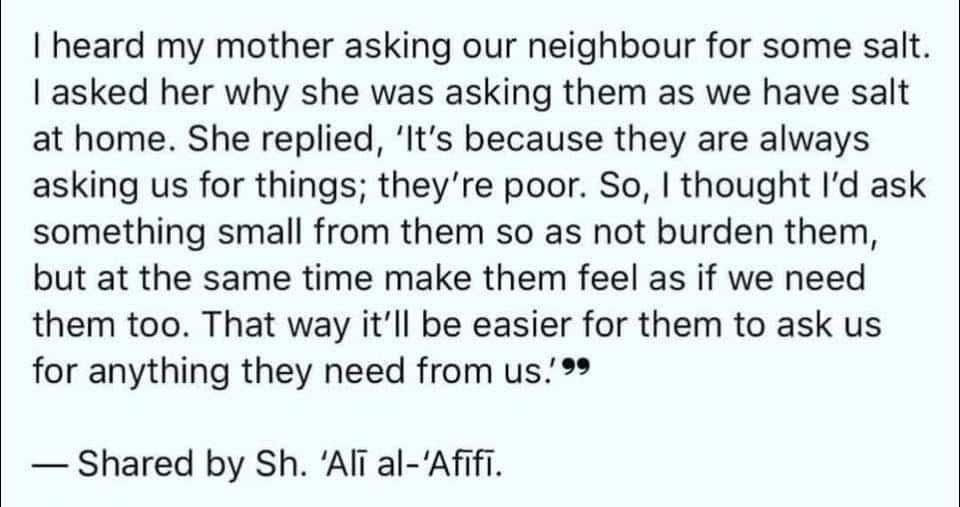 “I heard my mother asking our neighbor for some salt. I asked her why she was asking them as we had salt at home. She replied: ‘It’s because they’re always asking us for things; they’re poor. So I thought I’d ask something small from them so as not to burden them but at the same time make them feel as if we need them, too.”

Many commenters who grew up on the poor end of this story confirmed that a small, unseen kindness like this would go a long way. 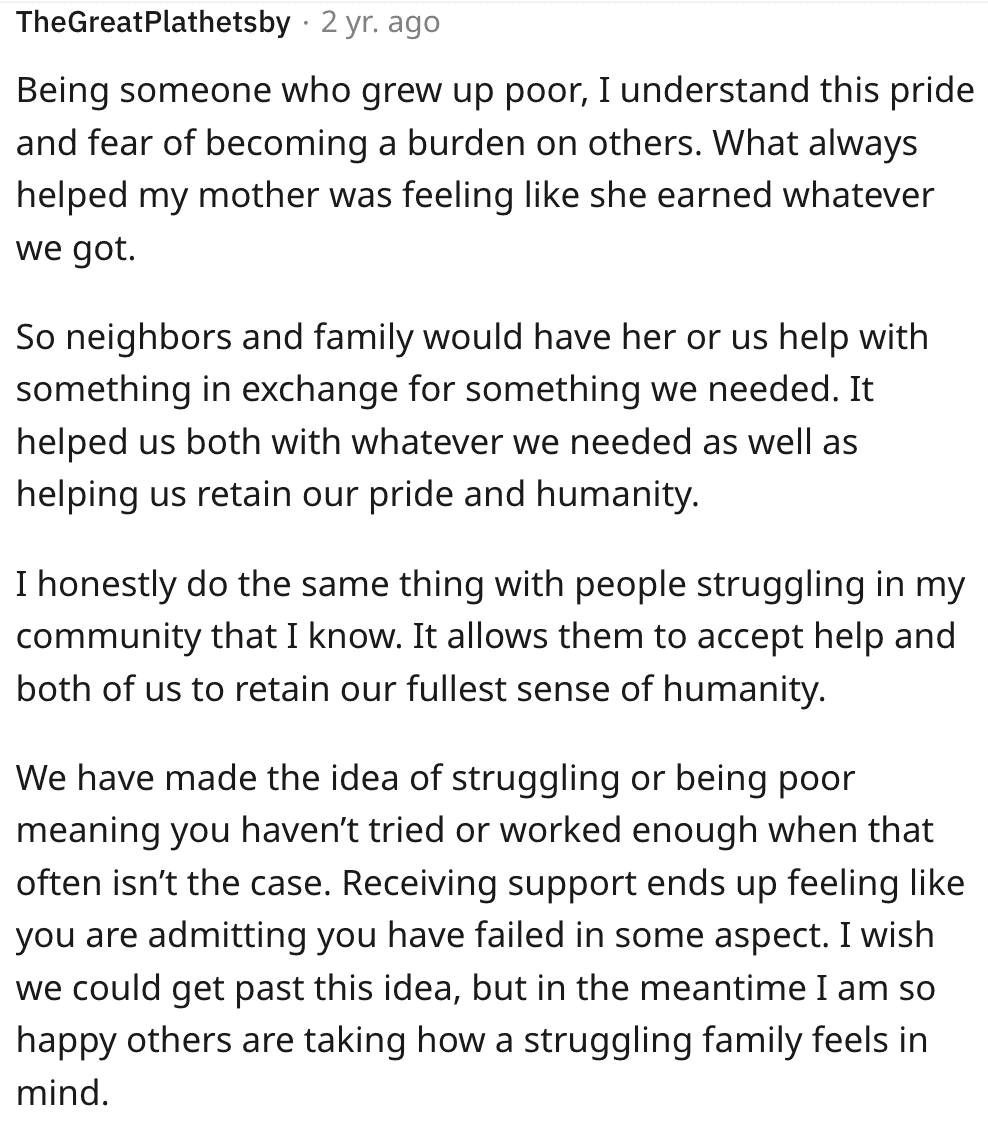 “Being someone who grew up poor, I understand this pride and fear of becoming a burden on others. What always helped my mother was feeling like she earned whatever we got. So neighbors and family would have her or us help with something in exchange for something we needed. It helped us both with whatever we needed as well as helping us retain our pride and humanity.

I honestly do the same thing with people struggling in my community that I know. It allows them to accept help and both of us to retain our fullest sense of humanity. We have made the idea of struggling or being poor meaning you haven’t tried or worked enough when that often isn’t the case.”

Many others, like this commenter, said this is a lesson they will take with them.

“That is such a decent thing to do. I need to remember this and try to live up to this example. Good stuff.” 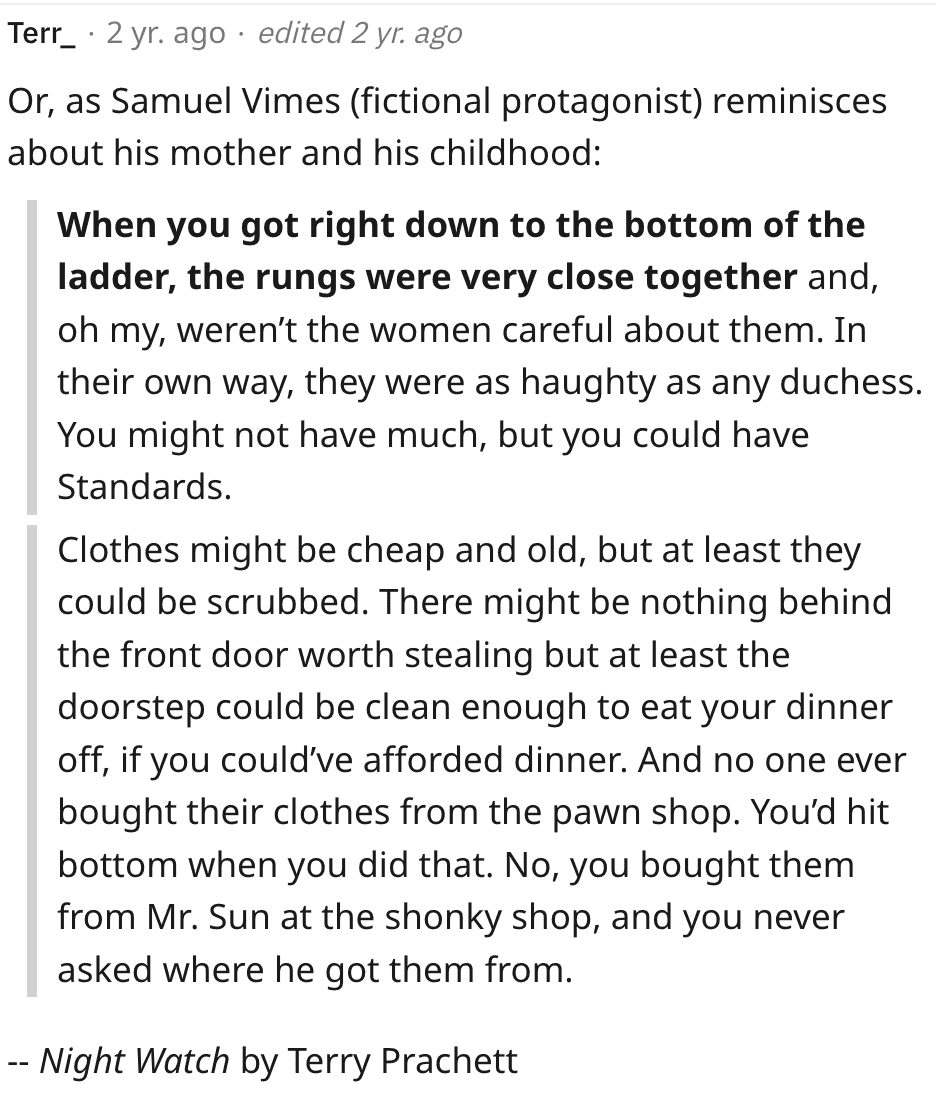 If you’re curious why a simple act like this struck a chord for so many, Redditor Aerron tried their best to explain.

“It feels good to help others. So maybe if we can let others help us more, we can help others feel good. This is a good plan. I never thought of it like that, but I think you’re absolutely right. Amazing how one sentence can change how you perceive something that has been cemented in your mind for years.”

Not only is a simple offering like this an act of kindness, science has also proven that doing nice things for others has a positive physical effect on our own bodies – a “helper’s high,” if you will.

Did you know that giving can actually give your brain a ‘Helper’s High?’ #GivingTuesday https://t.co/0v30QyUIhK pic.twitter.com/qfRNiLVMNS

So pay attention to those around you and go out of your way to make sure everyone can feel their best every single day.

Not because there’s something in it for you, too, but I mean…that’s a nice perk.

If you have something to add to this conversation, drop it on us in the comments!