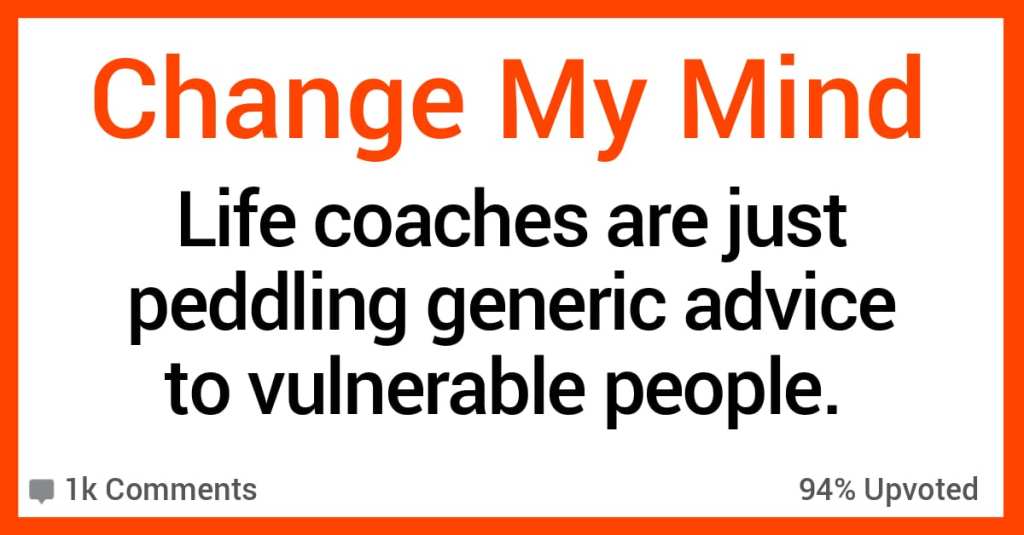 Are Life Coaches Useful, or Are They Just Pandering to Vulnerable Folks? People Discuss This Interesting Topic.

When people are down and out, depressed, lost, or otherwise searching for answers, that can make them vulnerable to others who prey on folks like that, looking to earn a few bucks off their uncertainty and doubt.

And while some people find life coaches helpful or even call them lifesavers, from the outside, the industry can look and feel like a bit of a grift.

This person is asking Reddit to change his mind on that subject, and as always, Reddit has more than a few thoughts on the subject.

"Life coaches" are predators preying off of weak and lost people with feigned kindness and generic advice that is available for free pretty much everywhere online. from unpopularopinion

Let’s see what they have to say!

16. The results justify the means?

My work paid for 3 “life coach sessions” I actually lost 50lbs and got a huge promotion.

I don’t know why it worked, but it did.

Most life coaches haven’t even got their own s*%t together. Same as the ones who tell people how to become millionaires.

14. Some people just need a friend.

However, you’d be surprised how many people hire you just to give them an honest-to-god third party opinion (evaluation) of their lives without the fear of being judges like in professional therapy

These people usually have a strong, perspective career path in STEM which is a major plus

However, many of them have 0 fashion sense, have the same haircut for decades, don’t do basic grooming, never went to the gym in their lives, are socially awkward, you get the gist

Now, can you find advice on all these things online? Yes you can…but most people genuinely don’t know where to start in life and need that pat on the back and someone to tell them “well done”

In a slightly sad but realistic way, life coaches are “best friends” for hire

For some reason Youtube ads are full of these and many of them are outright scammers – I don’t understand how they allow them to run these ads.

Some of them even start out so scammy you can tell it’s a scam in the first 2 seconds, like one started off as “This is NOT a get-rich quick scheme” (which is true cause you won’t get rich, but that’s exactly what a get-rich quick scheme is about – not getting rich) or “You see this stack of money? You don’t need that to get started”.

So it’s the industry that scams people, not the actual coaches. Just like the education system.

Education is only a scam because it is a positional good with limited intrinsic value.

Imagine if everyone could get a Harvard degree via virtual learning.

Would we all make Harvard money? Would the GDP grow massively because we were all so much more productive now?

Right. “Life coach” is not a protected term as anyone can call themselves a life coach.

Basically you could become one of those internet “instructors” that builds a “course” and gives a certificate upon completion stating that you approve of them becoming a life coach.

Just include the fine print disclaimer that nobody certified you and you’re just a guy claiming to know about life coaching and nobody has legally made you stop.

A woman I know who is a life coach in Arizona said she teaches professional psychologists how to speak to their clients.

Is that a thing?

I cant find the answer on the old google search myself. As far as I am aware psychologists are already trained and educated in that area themselves. Why would they seek out a life coach? Should mention she is a very defensive “react rather than respond” type person.

I am assuming she said this to be “right” and “win” the argument we were having. I didn’t question her, didn’t want to keep engaging. But now I’m honestly curious.

I’ve always thought it would be a good racket to have to certify something that hopefully becomes the industry standard.

There’s actually a huge underserved demand for this.

See, if there is a widely accepted certification for something, businesses can use it to use it to shut out completion in the name of health, safety, sustainability and thinking of the children.

The fact that almost every industry doesn’t have some kind of Byzantine certification process astounds me.

8. Some people don’t even know how they got there.

At first, I started as a part-time writer for their blog, then they transitioned me into coaching calls and about 6 months later I was offered an “assistant” position and there I was…

7. That’s all you really need to know how to do.

I had a coworker once who was a life coach on the side. He was homeless, smoked heavily, was very disrespectful, over all had a lot to work on himself.

He was great at talking out of his a$$ though.

6. They could have a place.

I don’t know a thing about life coaches, but the idea that “because something is online for free” doesn’t make anything less valuable. There are information rich guides for repairing your car, doing your taxes, exercise routines, cooking, etc, yet it’s is perfectly acceptable to pay for similar services.

Not everyone has the time to invest in research, and not everyone knows what to look out for and the skills that they are overlooking. Some people never learned the things that seem obvious to everyone else.
I don’t fault a profession that makes information easy and holds people accountable because a lot of people really want that.

Enjoy this upvote to pair with your unpopular opinion

In the work I’ve done for website builder software companies I’ve run into a LOT of life coach type people. And man oh man the hellscape lives some of them have is hilarious to know about.

I remember one guy in particular several years ago who had all his pages set up for his life coach seminars and whatnot but if you went and looked his business up on places like Yelp or other review sites every single one was a scathing review about how he ruined their life, coupled with replies from the guy himself cussing them out and going on tirades.

It was an amazing dumpster fire to watch.

4. Maybe it could be beneficial.

I’ve never used a life coach, but I could imagine a life coach being useful for the same reason a personal trainer or dietician is useful. It’s not because they have special knowledge but because they provide structure and accountability. We all know that the resources to get in shape and eat healthy are readily available on the internet.

And yet a lot of us are bad at following through. If you’re paying someone good money to have a weekly meeting with you about your fitness and diet, it’s probably a lot easier to stay on track, even though you could just do it totally on your own.

Just like how plenty of psychologists are total nut jobs themselves.

A train wreck of a human being can still be a decent psychologist. Just because I can make you a healthy eating plan that works doesn’t mean I could stop myself from getting Wendys for lunch and CPK for dinner 🙂

2. Are they different from a mentor?

When I was in law school we had to have a mentor for one of my courses. And the one I got, he was this professional life coach who started his own business that people pay thousands of dollars to see. I thought he was a quack, a hack, and a bitch. I hated him and he didn’t know what the f**k he was doing. He sounded like a machine that was programed to say random s**t.

I had to meet with him twice a week and talk about my future goals. He was talking out of his a$$ saying s**t I already knew or s**t I had already decided I wasn’t going to do. It was so weird.

But yeah, I agree

I couldn’t give two sh*%s if they’re a hypocrite as long as the advice they’re giving me is sound.

Jordon Peterson is perhaps the only self-help author I would recommend based off the fact he’s a clinical psychologist. But even then…. I don’t know, I feel like self-help books are kind of the ‘easy way out’

On the one hand, I can see how it could be a grift. On the other hand, if people feel like it helps, what’s wrong with that?

Where do you come down on this issue? Tell us in the comments!