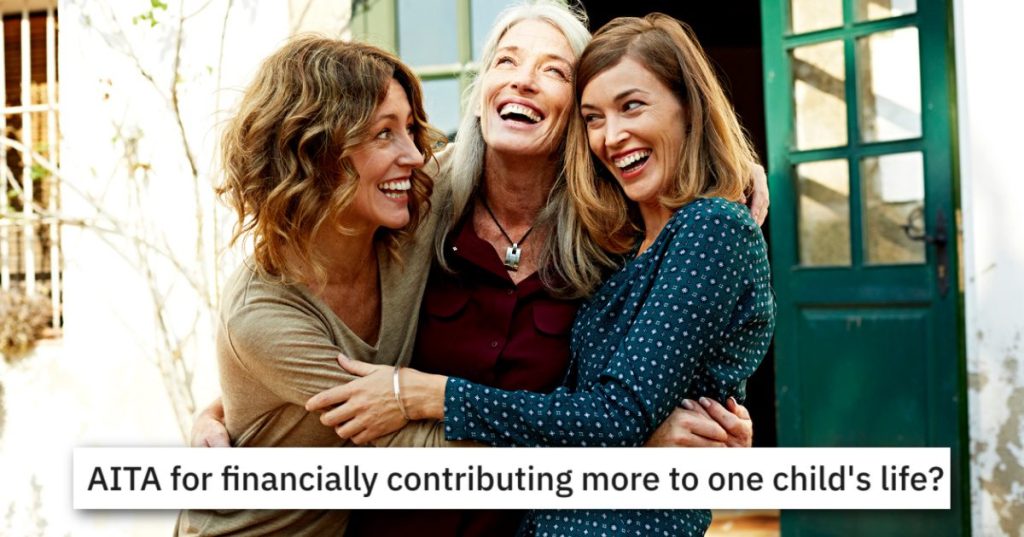 Are Parents Expected To Financially Contribute Equally To Their Children’s Lives?

This is such a hard question, I think, because while parents want to be fair and ensure all of their children they are loved equally, kids grow up into adults who are all unique.

Their individual situations, life choices, medical issues, and on and on might necessitate one needing more help money-wise than the others – but then do parents have to make sure the others get compensated, too?

That’s what this woman is wondering. She has two grown daughters and has gifted the elder quite a bit of money in the form of an expensive wedding, a whole house, and assistance with medical bills for their grandchildren.

We have two kids, Ava (35f) and Heather (33f). We have a great relationship with both kids.

About 12 years ago, Ava got engaged to her now husband. We bought them a house in our neighborhood and then the next year paid for their wedding.

The younger is still exploring the world and her options, and though they bought her a nearby plot of land (that she didn’t want), and helped out with less expensive things here and there, everyone is aware the older sister has gotten more money.

Heather has lived in a few different cities, taken different college programs, etc. She seems content to keep exploring where her happy is, and I think that’s great.

About 10 years ago, different plots of land came for sale in our neighborhood, We asked Heather which she wanted. She thanked us for the thought, but said that she didn’t know where she wanted to be and that we shouldn’t buy land for her.

We ended up buying a plot of land near us. We told her, she again thanked us but never made use of the land.

Now, the younger has asked for help with a down payment on a house where she lives (not building on the plot of land), and OP isn’t sure they have the money.

Fast forward to now, Heather approaches us, clearly nervous, and respectfully asked if we would be able to help her with a down payment for a house in the city where she lives. She was clear she understood if that was not possible.

Their savings haven’t held up like they expected, but even so, OP’s wife thinks they need to help her, given that they helped her older sister even more.

This has caused an argument between myself (56f) and my wife (60f). I would love to help Heather, but honestly we are in very different financial circumstances now then we were before. We are hoping to retire soon, and do not have a lot of excess money.

My wife thinks that Heather does not ask for much and that we have clearly helped one child significantly more than the other. (Ava’s wedding cost tens of thousands of dollars and the house was obviously hundreds of thousands). She thinks we should sacrifice whatever we can to help Heather.

To be clear, we have financially helped Heather over the years, helped with decorations when she’s moved, with furniture, etc. (I know it’s not the same, but I want to be clear we are involved in both kids lives). I also know that Heather would be uncomfortable if she knew us contributing to her house was impacting our retirement.

I think if we talk to Heather openly about the difference in our financial circumstances now and then, she would understand.

The wife suggests selling the plot of land but OP is loathe to do it, given how much it has increased in value over the years and the fact that their youngest “might” want to move back home one day.

My wife wants to sell the piece of land in our neighborhood to give Heather the money. I really don’t want to do that. For a few reasons.

Including that I think Heather would regret that in the future because she has mentioned once or twice over the years that she will want to move back home when she’s older. Prices for land here have gone up significantly. To be frank, nobody in our family could ever afford to buy here now or in future.

AITA for not being able to give Heather the down payment?

Reddit is going to have some thoughts here, I just know it!

The top commenter thinks that they should have automatically put the same amount into savings for the younger that they gave the older for her wedding and house so the “we don’t have the money now” issue would not have come up. 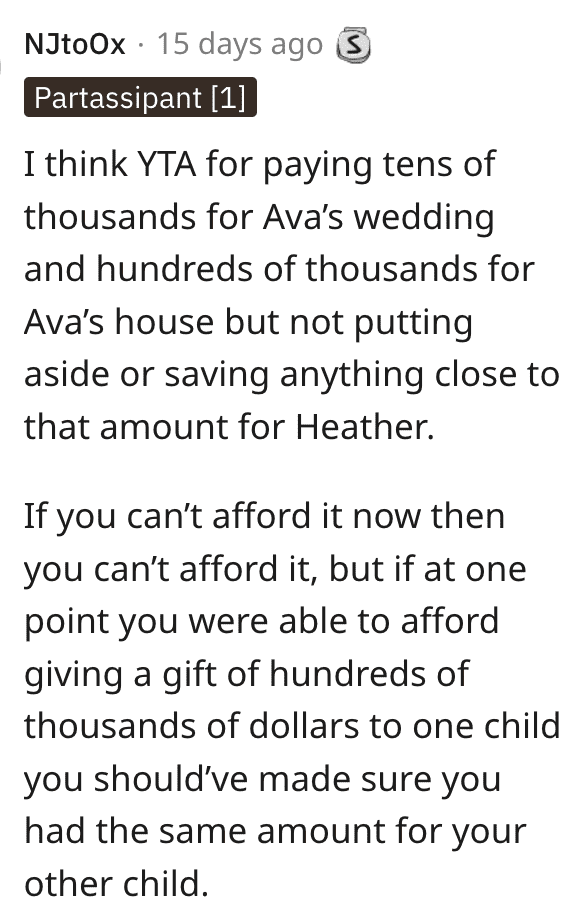 Some people handed down some pretty harsh judgments. 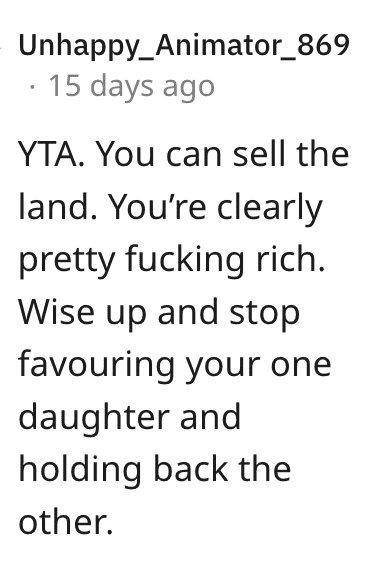 While others think OP and her wife are clearly trying to do the right thing, whatever that might be. 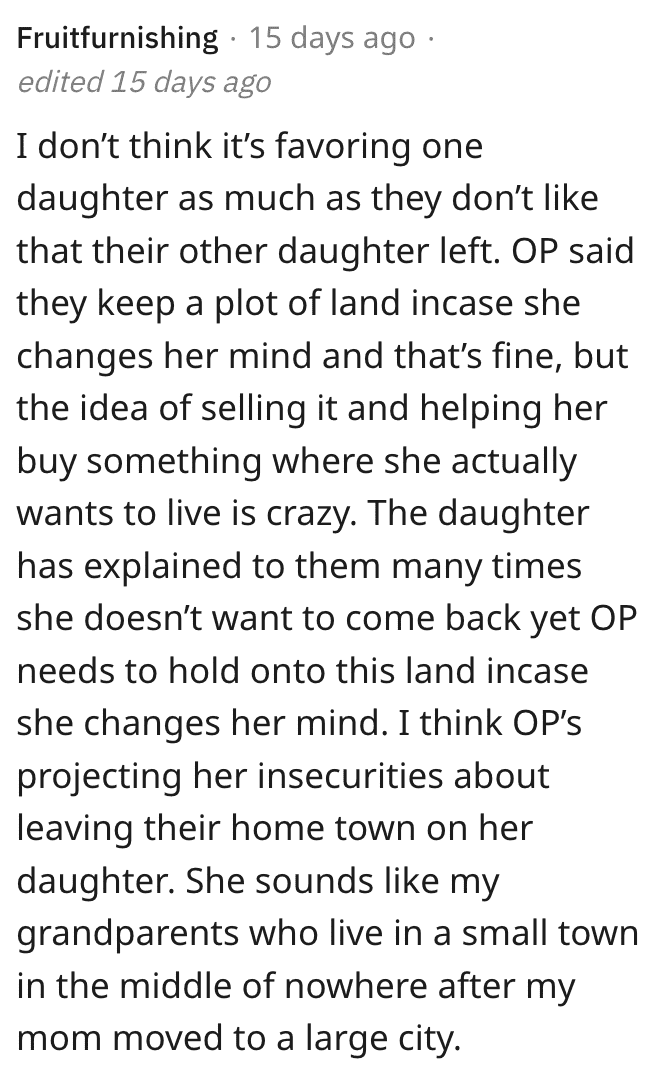 Most people see the plot of land as the answer. 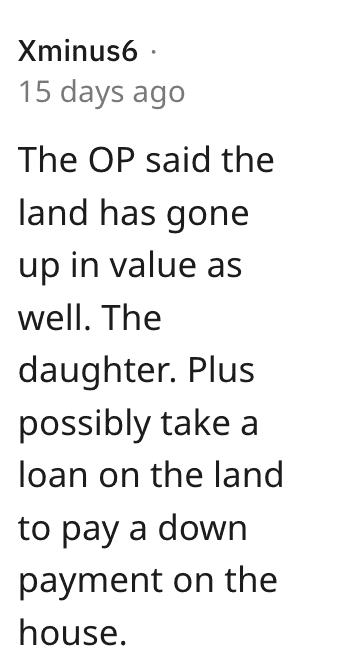 Many also believe that their will should be written to reflect the previous financial imbalance. 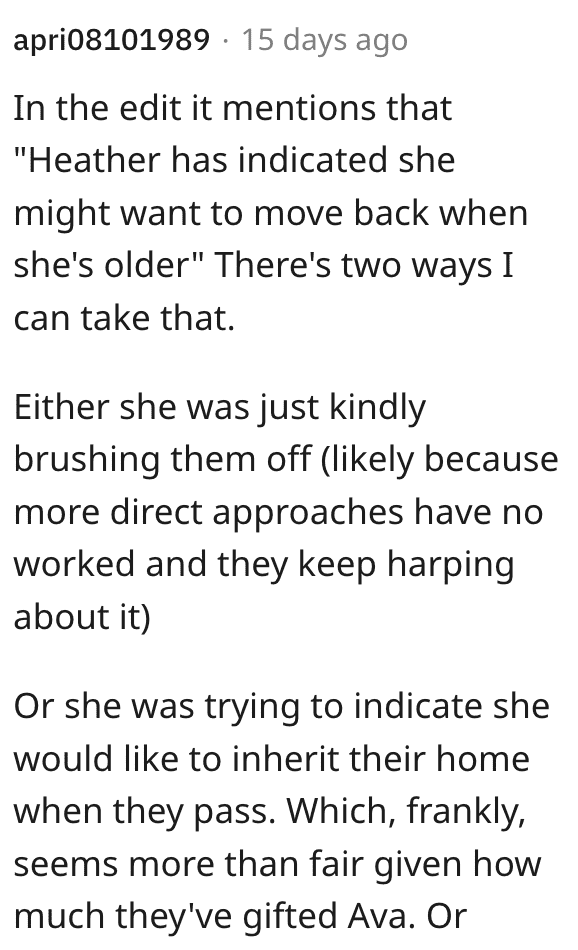 This edit makes it clear that OP read these replies thoughtfully and is working on setting things right with both of their daughters. Huzzah.

I just want to say that Mel and I love both girls more than we can say. We didn’t plan, and the fact that there are so many of you saying that Heather will think we value her less is our biggest fear here. Heather is a wonderful independent, kind and loving person. She deserved and deserves better from us. Obviously.

I am not comfortable getting too specific but over the years there have been some unexpected health issues arise, with my parents and then Ava’s kids that have depleted our funds more than we expected. But bottom line, that’s something we should have taken into account when giving Ava so much.

There have been many suggestions here that have been helpful so I thank you for that, and for the reality check about selling the land and letting Heather make her own choices.

Heather is a person who is incredibly sensitive and kind. Most often to her own detriment. To a point where I think she knows we would prefer her to live near us and may not accept the sale of the land because of it. To be clear I am absolutely open to the sale of the land or transferring it to Heather now, it’s just how to best approach it so that Heather doesn’t feel guilt going forward.

You’ve given us a lot to think about and we’re going to try to move forward as best we can to make sure Heather knows she is loved and valued (some suggestions regarding our will were helpful in this regard).

I’m not sure what else to say other than thank you for taking the time to comment. We are going to do our best to improve going forward.

I think this is the best possible outcome, and refreshing to read an s/amithea$$hole post where parents truly love and value their children!

How would you have handled this? Do you worry about playing completely fair between kids?

Let’s talk about it in the comments!