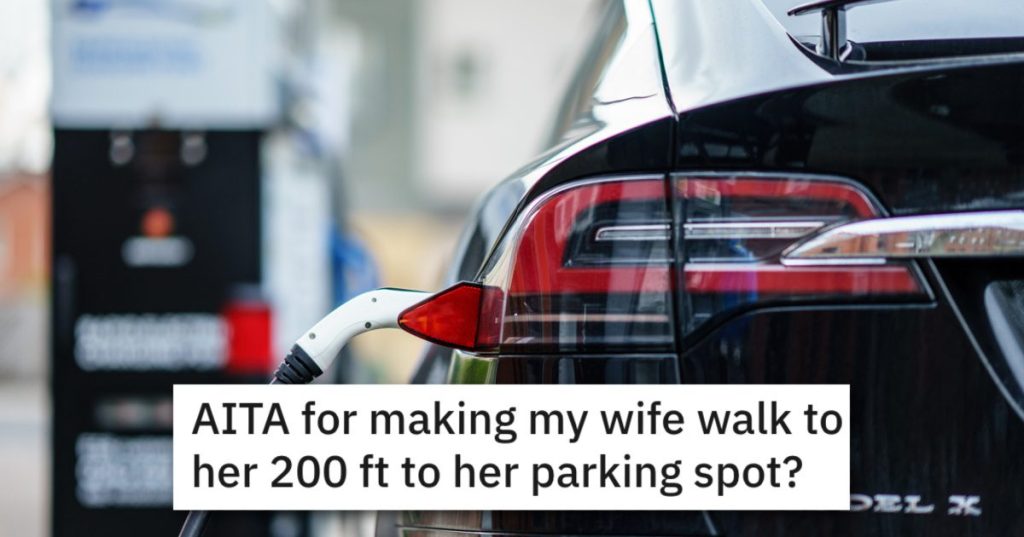 Does Hoarding The Garage Space Make You A Bad Spouse?

If you’re someone who lives in a climate where poor weather happens regularly (or even on occasion), then there’s a good chance your garage space is precious to you.

Not having to warm up a car or get drenched or scrape snow or burn the backs of your thighs is pretty awesome, and that’s to say nothing about the safety features of being able to park indoors.

OP has an electric vehicle that needs to be charged and his wife drives an older Prius, so when it came time to decide who gets to park in the garage, it seemed like a no-brainer.

His car goes in the garage and she parks a few hundred feet away outdoors.

We live in a townhouse with one garage parking spot. I park my EV in the garage so I can charge it overnight and keep it out of the elements.

There are guest parking spots right next to the garage, but when those are unavailable, I request that my wife parks her car (a beat-up 2006 Prius) on the street, which is 200 feet from the garage down an asphalt driveway.

She leaves for work at 6 am, while I don’t work until 8 am. AITA for not letting her park in the garage?

He made these edits in an attempt to ward off some of the negativity in the comments.

My wife has broken the side mirror and scraped the Prius backing out of the garage on two separate occasions.

She agreed to the parking arrangement before the car was ordered.

I’m not trying to flex nor trying to be a “Tesla Bro”. Figured you all wanted more specificity.

The driveway is shared amongst my neighbors and no one is allowed to park there.

I’ve driven the Prius for 11 years before passing it on to my wife, who drove an even crappier 90s car before then. She’s sentimentally attached to the Prius and won’t trade it in until it kicks the can.

I refer to the Prius as “beat-up” because it has dents, chipping paint on the roof and hood, and paint transfer from previous run-ins.

I walk her out to her car when the distance is not within view of our bedroom.

Her commute is 10 minutes inner streets vs. my 40-minute highway commute.

Let’s see if it worked!

The top comment suggests that it definitely did not, but they also think it’s silly to think walking 200 feet is really what his wife might be upset about. 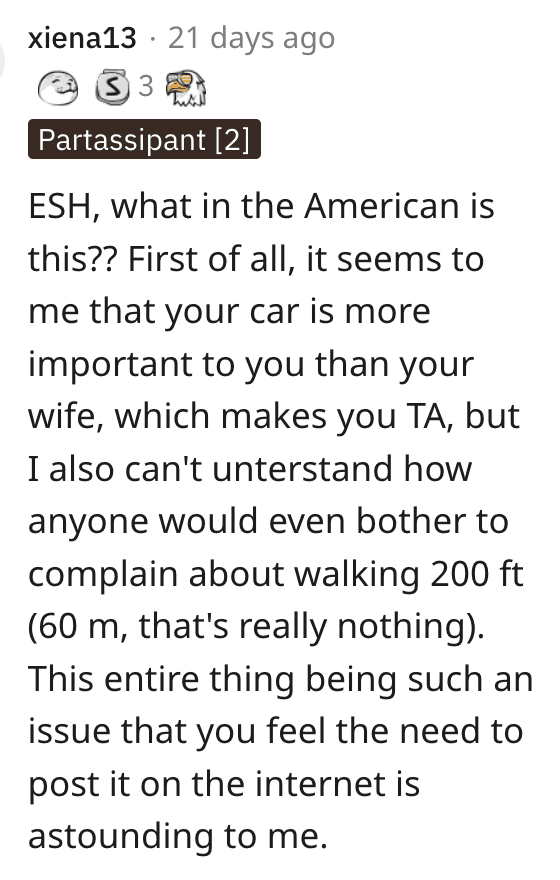 Plenty of people think she’s actually upset about being valued less than a car. 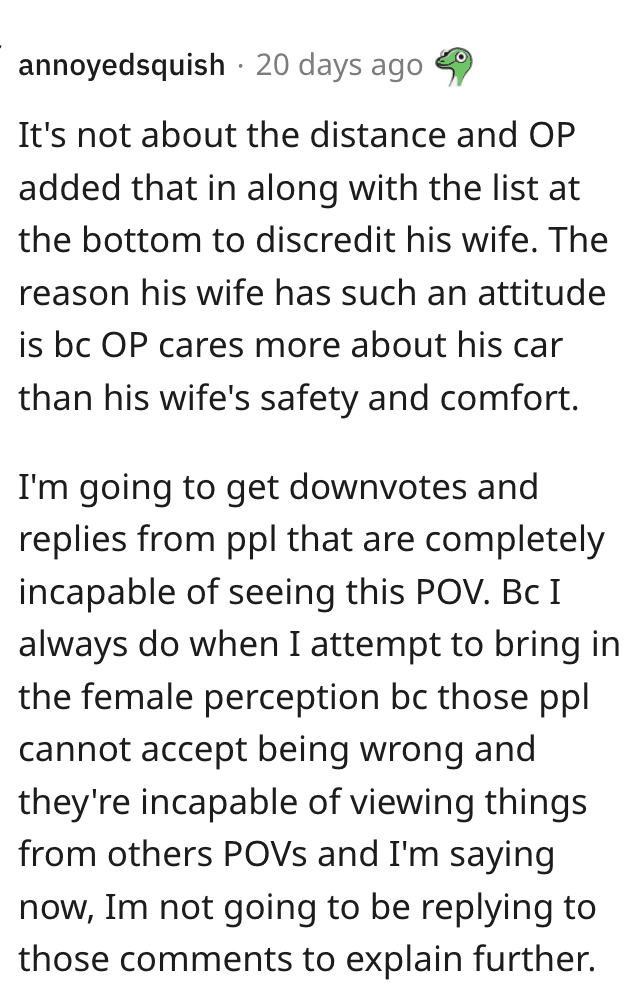 He might want to have a long talk with his wife, is all. 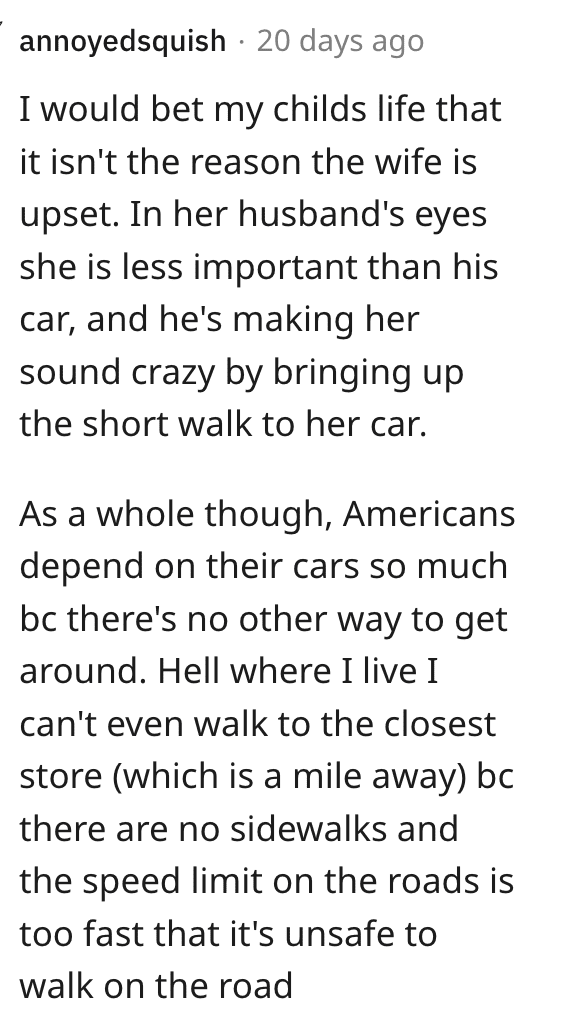 Lots of folks think they are doing marriage better than this couple! 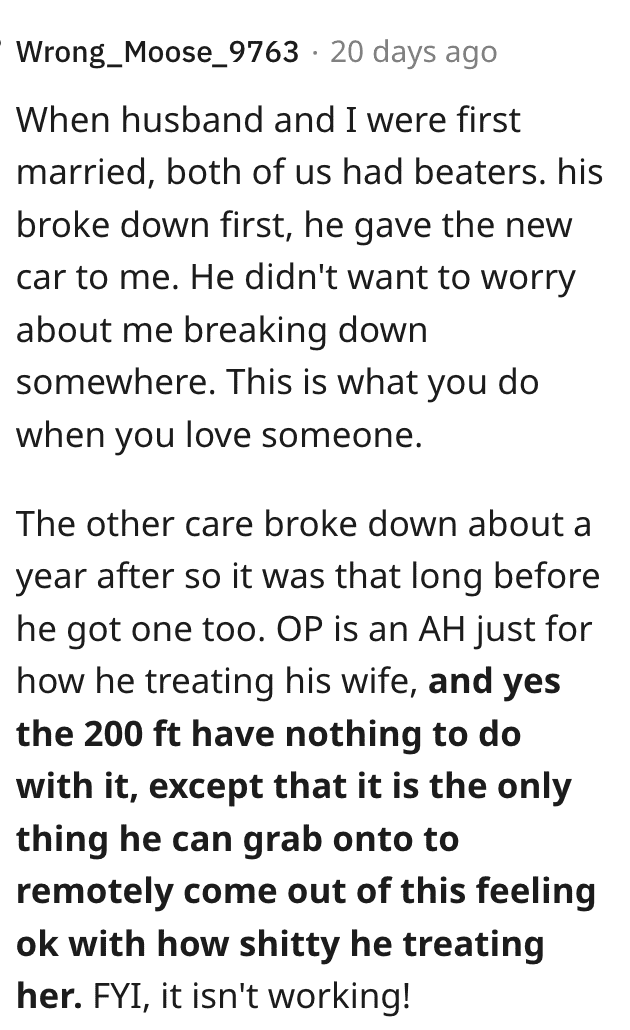 Seriously, the judgements are pretty rough! 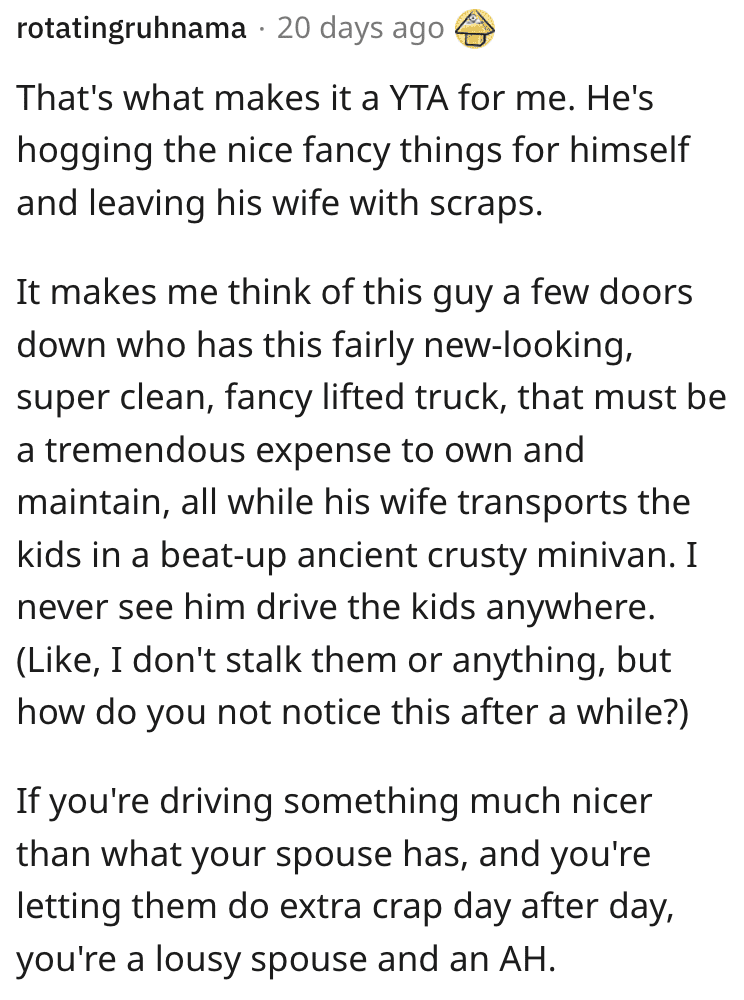 When you look at this on the surface, it makes sense that the car that needs to be plugged in should get the garage, but since when has a relationship question been about what’s on the surface?

Do you agree with these commenters? Sound off down below!