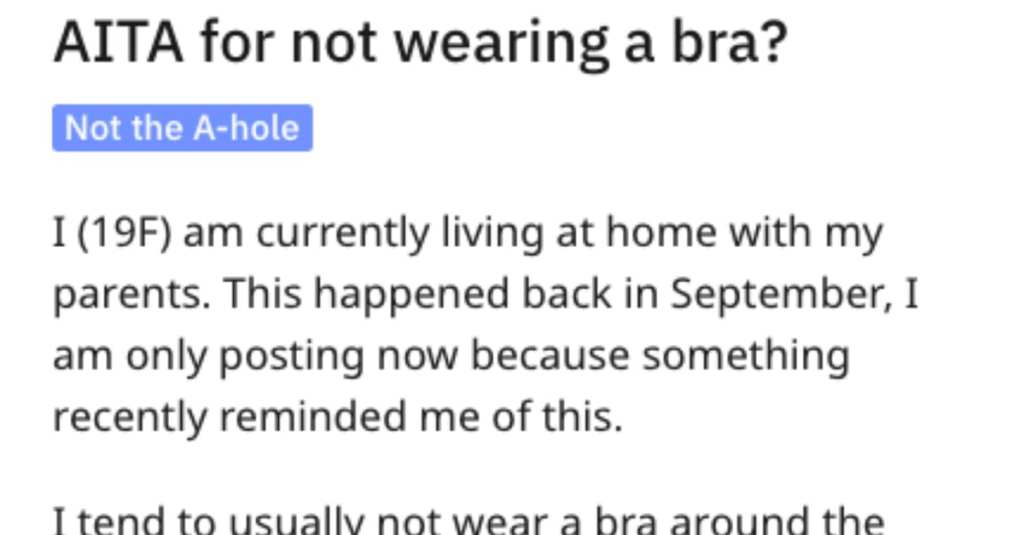 Woman Asks if She’s a Jerk For Not Wearing a Bra. The Internet Responds With a Resounding…

Times, they are a changin’, my friends. Back in the 60’s, women burned their bras to protest the Vietnam War (among other things), but in “polite” society, the proper undergarments have always been required. Even the sitcom Seinfeld tackled the issue in an episode in the late 90s, in which a woman wearing no bra (or wearing only a bra) “caused” an accident and was sued in court.

Bras aren’t required though, right? So, does choosing not to wear one make a woman an a$shole?

That’s what this OP is wondering after an incident at home. She came to dinner with her teenage sister and parents without a bra, and her father made a comment about her needing to put one on before they could eat dinner.

I (19F) am currently living at home with my parents. This happened back in September, I am only posting now because something recently reminded me of this.

The incident in question happened when my parents called me and my sister (17F) to eat dinner. I was not wearing a bra, as per usual, and my dad made some comment like “This is going to be a bra-wearing meal.” I thought it was a joke, kind of, so I just kind of said nothing, and obviously didn’t go to put a bra on.

When her father wouldn’t let it go, making it clear that he was not joking, her sister took her own bra off in solidarity.

But he kept hounding, saying that I needed to go put a bra on before we could eat dinner. My sister (who I guess is way braver than I am), in response to what he was saying immediately took her bra off. (She took it off while her shirt was still on so it’s not like she stripped in front of anyone or anything).

Their father confessed that it “makes him uncomfortable” when they don’t wear bras in the house and then proceeded to give them the silent treatment for the rest of the night.

The next day, things were back to normal.

Then my dad got really quiet and said that it “makes him uncomfortable” when we don’t wear bras, and he just kind of left the room. He eventually came back to eat dinner with us, but he didn’t say a word the entire time.

The rest of us were shocked, I guess? and no one really said anything for the entire meal and it kind of ruined dinner. He also wouldn’t speak to us for the rest of the night, but by the next day he was pretending like everything was back to normal.

When it happened again, though, he again reiterated his discomfort and acted angry that she wasn’t complying.

And again, recently, he made some comment about how what I was wearing (a t-shirt with no bra and shorts) made him uncomfortable, and he got mad again and wouldn’t talk to anyone.

Her mom seems to be staying out of it, and she’s wondering if she’s doing something wrong since she’s making her father uncomfortable.

My mom was there for both events and didn’t say anything, although she usually doesn’t go against my dad. But he got pretty mad, and I don’t really like making people uncomfortable.

So, AITA for not putting a bra on for my dad when it makes him uncomfortable if I don’t?

What does Reddit say? Let’s keep reading and find out!

This man made a very good point, that the rule should apply to everyone, then? 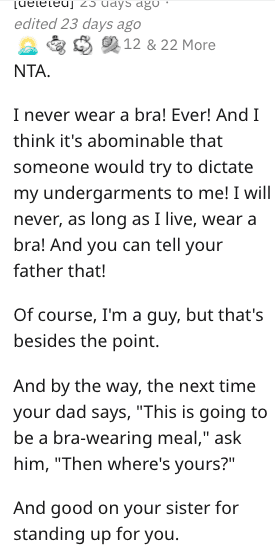 There’s an obvious elephant in the room, too. 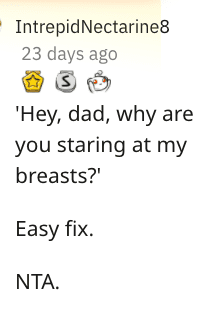 It’s really not normal – or at least, it shouldn’t be. 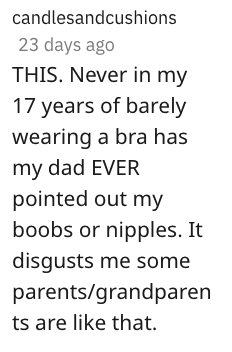 But apparently it’s a thing (that needs to change). 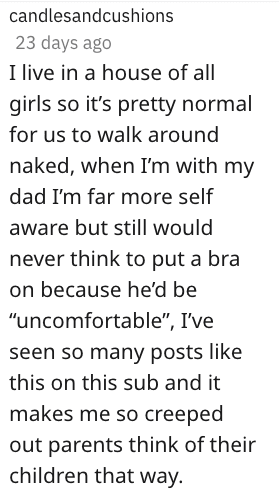 This is how dads are supposed to act. 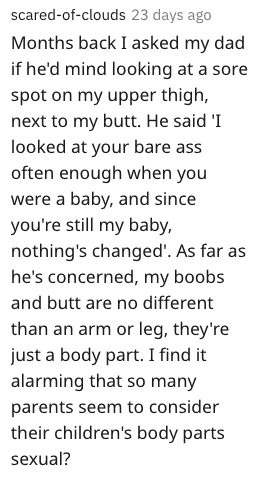 The bottom line is that it’s weird for parents to sexualize their kids, full stop.

And no one should get to dictate what other people wear under their clothes.